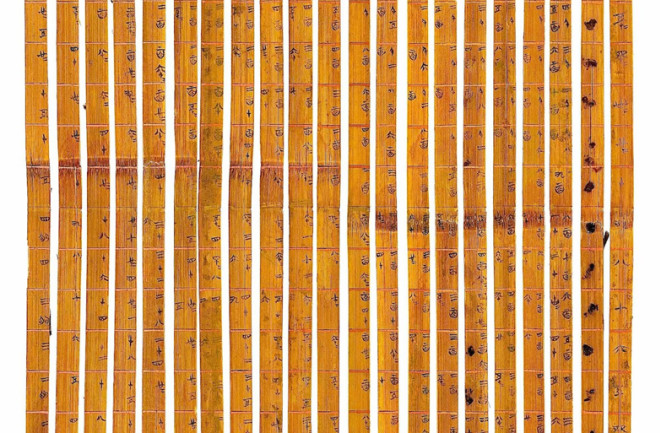 The Tsinghua table places factors across the top row and down the far right column. From left to right, or from bottom to top, respectively, the values are ½, 1, 2 . . . 9, then 10, 20 . . . 90. The rest of the table shows the products of these factors. | Research and Conservation Centre for Excavated Text/Tsinghua University

By cleaning away mold from a set of 21 ancient bamboo strips, researchers have revealed a mathematical surprise: the world’s oldest decimal multiplication table. Unlike the times tables that Western schoolchildren memorize, the bamboo table even multiplies fractions.

The bamboo strips are part of a roughly 2,500-strip collection that dates to 300 B.C., before China was unified. In January 2014, historians and paleogeographers at China’s Tsinghua University announced that the calligraphy on them forms a matrix with rows and columns of numbers from ½ to 90 that, like modern multiplication tables, yield a mathematical product where they intersect.

Bureaucrats and businessmen would have used the table to quickly tally payrolls or taxes. No other ancient civilization multiplied numbers in this way, says paleogeographer Wen Xing of Dartmouth College: “It is an amazing discovery.”

[This article originally appeared in print as "The Bamboo Calculator."]