From biting creatures to spontaneous flames, doing your duty in ancient Rome could be a frightening task. 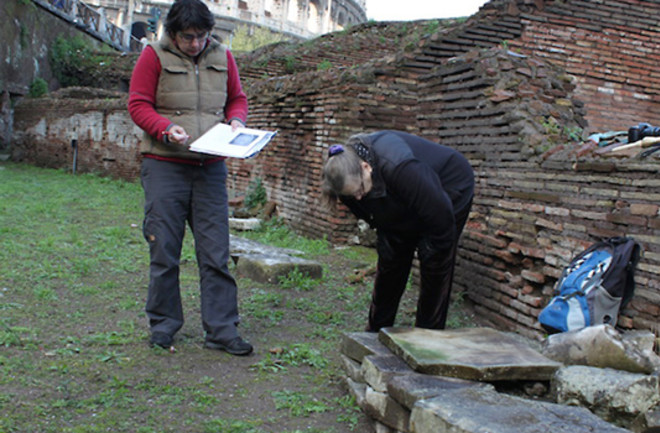 Unlike the relaxation associated with Roman baths, ancient Roman bathrooms triggered trepidation. They consisted of dark, dank holes leading to sewer channels from which emerged biting creatures or even, because of methane buildup, naked flames. Independent archaeologist Gemma Jansen has studied these unsavory sites for the past 20 years, becoming one of the go-to latrine gurus among classical researchers.

In January 2013, beneath layers of architectural ruins in Rome’s Palatine Hill, Jansen examined something of a treasure among toilets: a chamber likely to be the loo that slaves in Nero’s palace would have frequented 2,000 years ago. The stone bench that wraps around the room would have housed some 50 soccer ball-size holes, but no dividers.

“Like public toilets today, they are convenient if you need them, but mostly they are not pleasant nor desirable places,” says Ann Koloski-Ostrow, an archaeologist at Brandeis University who collaborates with Jansen.

Ancient Roman lavatories were a more social affair, as seen in this example from Ostia Antica, less than 20 miles southwest of Rome. ImageBroker RM/Imgaine

Restroom-goers relied on superstition to protect them. Throughout the empire, Jansen has found magical spells (like abracadabra) meant to ward off demons scrawled on lavatory walls. Laughing apparently could expel demons, too, which is why, Jansen presumes, Romans colored a caricature of Jesus as a fish at another site. Jansen and Koloski-Ostrow have also identified several bathrooms guarded by an image of Fortuna, the goddess of luck.“Fortuna seems to have had a special relationship with toilet users,” Koloski-Ostrow says. “Perhaps you prayed to her for a good bowel movement. Perhaps you prayed to her to prevent a fire from tickling your bottom or a rat from biting you as you sat over open sewers.” But as the team’s soon-to-be-published findings show, the Romans didn’t need luck or magic — they needed hygiene.

It turns out the practice of wiping with shared sponges, a few per communal restroom usually sitting in a water basin, was an efficient means of spreading bacteria, possibly promoting diseases like typhoid and cholera. And, of course, being bitten or stung by some sewer-dweller does little for one’s health. No wonder the Roman baths get all the attention.

[This article originally appeared in print as "Archaeological Crap Shoot."]