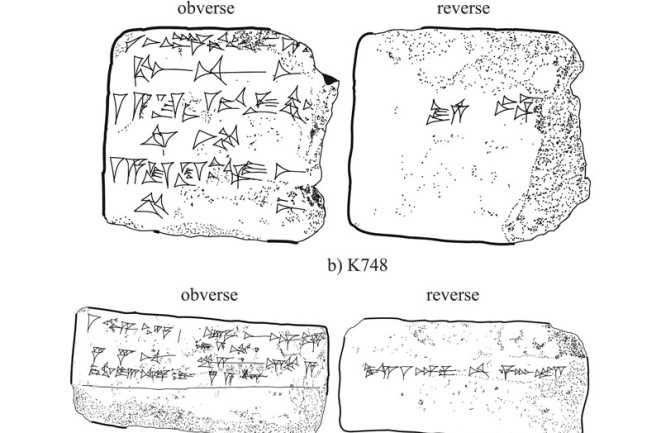 (Credit: Y. Mitsuma’s tracing of the photographs of H. Hayakawa)

Astronomers have watched sunspots come and go on the sun’s surface for at least 400 years. But to learn about the history of the sun’s activity before the time of telescopes, they have to turn to historical references to phenomena linked to solar activity, like the northern lights.

Now, a team of scientists have discovered what may be the oldest written records of auroras to date. These three Assyrian and Babylonian cuneiform tablets from about 680 to 650 B.C. seem to refer to auroras lighting up the skies. Chemical analysis of tree rings also show that there was likely a spike in solar activity around that time. This extends the known timespan of aurora records to about 2,700 years, as the team reported earlier this month in The Astrophysical Journal Letters.

“Historical records of aurorae improve our understanding of the history of solar activity,” study author Hisashi Hayakawa said via email. He’s an astrophysicist at Osaka University in Japan and a visiting researcher at the Rutherford Appleton Laboratory in the U.K.

Before the new findings, the oldest known record of an aurora was a Babylonian tablet from 567 B.C. referring to a red glow flaring in the sky. Babylonian and Assyrian astrologers from this era commonly recorded celestial events to interpret them as omens. So, Hayakawa and his team decided to search tablets from the seventh century B.C. to find any earlier reports.

A colorful display of the northern lights dances over the skies of Lapland, in northern Finland. (Credit: PaoloBruschi/Shutterstock)

The team found three candidate reports in tablets held by the British Museum. The tablets, all from between 679 and 655 B.C., refer to a “red glow,” a “red cloud” or “red cover[ing] the sky.” These descriptions are similar to eyewitness reports of the northern lights from more modern sources. Researchers believe they refer to one of two types of auroral behavior that create a red glow in the sky.

It’s fairly likely that Babylonian and Assyrian astrologers from that time could have seen auroras, the researchers said. Earth’s magnetic pole, which affects where auroras are visible, has moved in the 2,700 years since these observations. While the pole is near North America now, it would have been in Eurasia, closer to Babylon and Assyria, during the seventh century B.C. This means the observers in the region likely saw auroras more frequently and more strongly than they can now.

The researchers compared the timing of these potential aurora records with estimations of solar activity during the time. Tree rings preserve records of their environments each year, and scientists often analyze their chemistry to estimate past solar activity. In years when the sun releases particularly large bursts of energetic particles, tree rings have high concentrations of a radioactive form of carbon called carbon-14. Tree rings from about 660 B.C. show a spike in carbon-14 compared to previous years, so the researchers believe the records they identified may have been of auroras that came along with that spike in solar activity.

Overall, the goal of the project is to study the history of the sun’s activity over as long a period as possible. Hayakawa references a famous remark made by Isaac Newton to describe their motivations.

“Standing on the shoulders of giants as old as ~2700 years, we can see much further,” Hayakawa wrote.