Like a phoenix rising from its ashes, scientists believe one of Mars’ current moons, Phobos, may have been born from a ring of dust left by former versions of itself. 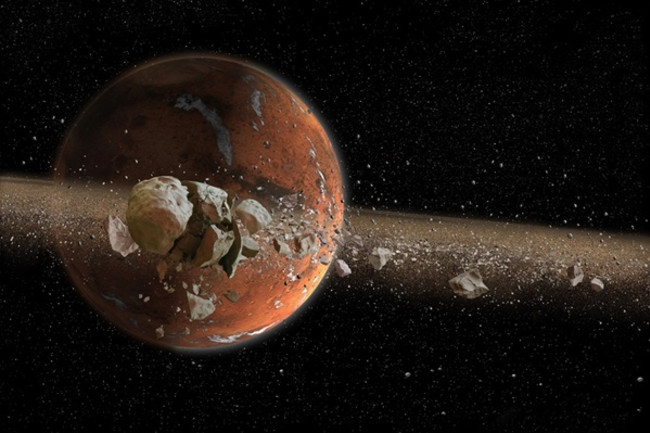 Someday, Mars’ moon Phobos will slip past a certain point in its degrading orbit and get ripped apart by tidal forces, forming a ring. This illustration depicts Phobos midway through that process, overlooking the Red Planet. (Credit: Ron Miller/Astronomy)

For a long time after their discovery in 1877, scientists assumed Mars’ two puny moons — Deimos and Phobos — were captured asteroids. This belief persisted until evidence revealed both moons formed at the same time as the Red Planet itself, and that the smaller one, Deimos, has a mysteriously tilted orbit. However, it wasn’t until 2017 that researchers put forth a new idea that could explain why Deimos' orbit is slanted by 2 degrees.

“The fact that Deimos’ orbit is not exactly in plane with Mars’ equator was considered unimportant,” said SETI Institute research scientist and lead author Matija Ćuk in a press release. “But once we had a big new idea and we looked at it with new eyes, Deimos’ orbital tilt revealed a big secret.”

Previous theories suggested that Mars’ moons formed out of debris ejected when a giant impactor struck Mars between 100 million and 800 million years after the planet's creation.

However, this new twist on the theory, presented at the virtual 236th Meeting of the American Astronomical Society this week, suggests that after the original collision and over the course of billions of years, generations of martian moons have since been recycled into rings, which, in turn, were molded into new, smaller moons.

And for Phobos, the cycle may be starting back up.

At just 200 million years old — which is relatively young by astronomical standards — Phobos is gradually spiraling inward as it dances around Mars. One day, likely in the next 30 million to 50 million years, Phobos will get too close to Mars and tidal forces will tear it apart.

And according to this new theory, the shattered remains of Phobos will then disperse around the Red Planet, creating a new martian ring.

With no rings to see for the time being, this cyclic martian moon theory also explains why the orbit of Deimos is tilted the way it is. Such an askew orbit could not be the result of a captured moon that spiraled toward Mars. It instead would have required a newborn moon migrating outward to disrupt Deimos’ orbit.

Ćuk and collaborators believe that just over 3 billion years ago, a “grandparent” moon to Phobos caused the tilt in Deimos’ orbit we see today. This pushy grandparent moon may have been up to 20 times as massive as modern-day Phobos. (Phobos is only about a dozen miles wide, so it has so little mass that a 200-pound person standing on its surface would weigh less than 3 ounces.) This older moon’s mass, combined with its outward migration, would have set it up to have an orbit three times smaller than that of Deimos. The ratio of the two moons’ orbits set them up to consistently interfere with each other gravitationally, giving Deimos its unusual tilt.

Once Phobos’ ancestor gave Deimos its tilt, it eventually began an inward journey, leading to its destruction. This was followed by two more ring-to-moon cycles, the latest of which created Phobos.

In 2024, Japanese space agency JAXA plans to send a spacecraft to Phobos as part of their martian Moons eXploration (MMX) mission. The ambitious craft will venture to Phobos, collect detailed data on the moon, and even gather samples from its surface for return to Earth. Scientists will then study these samples using some of the most sophisticated lab equipment available, helping researchers probe the murky past of the Martian moons.

“I do theoretical calculations for a living,” said Ćuk. “And they are good, but getting them tested against the real world now and then is even better.”

Four of the planets in our solar system currently have rings: Jupitar, Neptune, Uranus, and, most famously, Saturn. But of the thousands of exoplanets discovered so far, only one has strong evidence of a ring system: J1407b.

So, by studying past and current rings in our own solar system, scientists aim to get a better grasp on why certain worlds wear rings, as well as how to spot them in distant star systems.