Ancient Ancestor Was Mosaic of Human and Ape Features 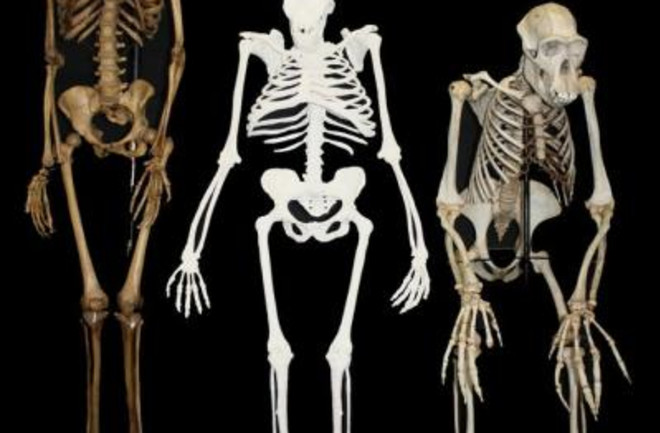 Composite reconstruction of Au. sediba. For comparison, a small-bodied female modern H. sapiens is shown on the left, and a male Pan troglodytes on the right. (Image courtesy of Lee R. Berger/University of the Witwatersrand)

It’s not as awkward as figuring out the seating at Thanksgiving, but finding the right spot for one of the newest additions to our family tree continues to puzzle researchers. First found in 2008 and named in 2010, features of the two million year old hominid Australopithecus sediba continue to defy categorization.

Nearly-complete skeletons and partial remains of Au. sediba from the fossil-rich site of Malapa in South Africa display both primitive and derived, or further evolved, traits, creating controversy over whether the early hominid was our ancestor or a distant relative.

A growing body of evidence, including six papers in the April 12 edition of Science, doesn’t rule out either scenario — but suggests Au. sediba is an unexpectedly complex mosaic of evolutionary fits and starts. The upper limbs of Au. sediba are the most complete of any early hominid known, according to one of the studies, and suggest it was well-suited to climbing trees and suspending itself.

Another study, however, found that Au. sediba’s lower limbs — studied from the relatively complete skeleton of an adult female — suggest it walked bipedally, with a hyper-pronating gait and fully extended leg, different from other australopiths.

An examination of the thorax of the early hominid revealed the upper portion was narrow and ape-like, not broad like humans’ — a trait linked to our locomotive ability to walk long distances and run. Au. sediba’s lower thorax, however, is less flared than apes and more closely resembles that of humans. While the findings do not resolve Au. sediba’s place in evolution, the fossils themselves are significant: due to the particularly fragmentary nature of hominin ribs, it is difficult for researchers to attempt any kind of reconstruction, but they were able to do so for Au. sediba.

Au. sediba remains were also complete enough to reconstruct its back, and researchers discovered its vertebral column had the same configuration as modern humans, with five non-rib-bearing lumbar vertebrae and five sacral elements, which distinguishes it from other early hominids, according to one of the studies. Au. sediba also appears to have had a longer and more flexible back than earlier australopiths, and more closely resembles Homo erectus in that respect.

A study of highly heritable dental traits revealed that Au. sediba appears distinct from Au. afarensis, previously posited as a close relative, but that it is closely related to another southern African hominid, Au. africanus.

According to a second study by researchers examining other elements of Au. sediba’s dentition, where the Au. sediba differed from Au. africanus, it appeared most similar to early examples of Homo, strengthening one theory that Au. sediba could be one of our ancestors.

The Malapa site is considered among the richest hominid fossil collection in the world and has already yielded more than 300 early human ancestor remains, including those of Au. sediba. Researchers working at the site expect to uncover many more fossils — some of which may one day definitively place Au. sediba, at last, at its rightful spot in hominid history.