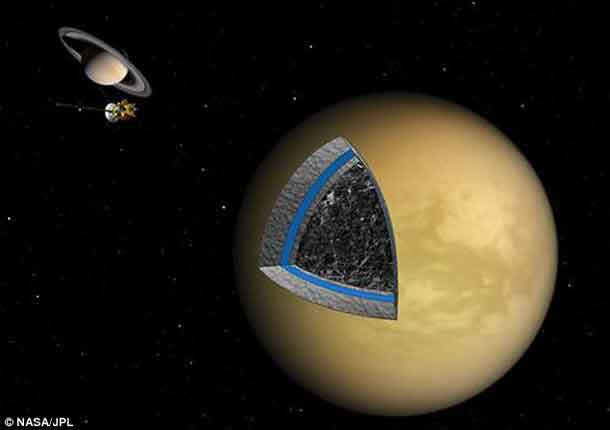 What's the News: Astronomers have known for many years that Saturn's moon Titan sports lakes of liquid methane. And in the past couple years, scientists have suggested that it also has an underground ocean composed of water and ammonia. Now, based on past observations by NASA's Cassini spacecraft, astronomers are saying that Titan's rotation indeed points to an underground sea---and where there's water, there may also be life. "Our analysis strengthens the possibility that Titan has a subsurface ocean, but it does not prove it undoubtedly," researcher Rose-Marie Baland told Astrobiology Magazine. "So there is still work to do." How the Heck:

Not So Fast: The astronomers admit that Titan's rotation could also be explained by a recent collision with a large asteroid or comet, which would have also upset the relationship between the moon's obliquity and its moment of inertia. The Future Holds: Now, the astronomers want to use this same method to look at whether Jupiter's larger satellites---Io, Europa, Ganymede, and Callisto---might also have subsurface water. Reference: Rose-Marie Baland, Tim Van Hoolst, Marie Yseboodt, Ozgur Karatekin. "Titan's Obliquity as evidence for a subsurface ocean?" arXiv:1104.2741v1Image: In this artist's representation of Titan, the cutaway reveals a light gray layer of ice, a blue layer of ocean underneath, and another light gray layer of ice under that, with a dark gray mixture of rock and ice in the interior. NASA/JPL