How hyperbolic geometry, once considered mathematical heresy, could help us understand human perception. 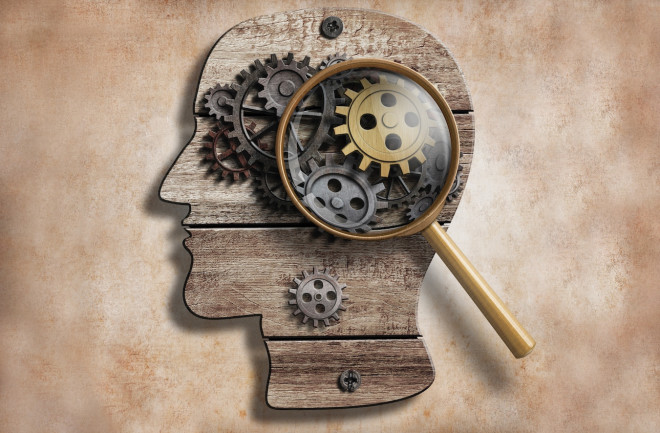 This originally appeared in the July/August issue of Discover magazine as "Your Hyperbolic Mind." Support our science journalism by becoming a subscriber.

The human brain is both a marvel and a mystery of evolution: Packed into a volume about one-quarter that of an inflated soccer ball, somewhere around 86 billion neurons form networks that enable us to do everything from mindlessly scrolling through Instagram to safely sending people into space. But a deeper understanding of the structure of those networks is still an open question.

Perception remains particularly vexing: How does the human brain turn the deluge of incoming signals — photons, odor molecules, sound waves, sensations on our skin — into an accurate mental simulation? What neural network could represent, say, the smell of chocolate?

Recent studies suggest that math may help us sort out these questions. To better approximate the complicated networks involved in perception and other cognitive tasks, some researchers turn to hyperbolic geometry. Like other geometries, it’s a set of rules about space, distance and connections. But unlike Euclidean geometry, which is what most people learn (or loathe) in high school, hyperbolic geometry describes the way space fits together — if space curved away from itself, everywhere.

“Hyperbolic geometry has long been underappreciated in biology,” says Tatyana Sharpee of the Salk Institute for Biological Studies in La Jolla, California. In the last couple of years, her investigation of the structure of the olfactory system has led her to hyperbolic geometry. But our sense of smell is only the beginning; she thinks the same approaches can be generalized to other senses and processes.

If researchers like Sharpee are right, then to understand the mind, we have to prepare to embrace hyperbolic geometry’s tenets — which, when they first appeared, bordered on heresy for the math world.

The Beginning of the ‘Bottomless Night’

We usually regard the world as following the rules put together more than 2,000 years ago by the “Father of Geometry,” Greek mathematician Euclid, in his treatise, Elements. Those rules approximate the flat, practical, physical world, and are useful on the scale of daily life. Euclidean geometry has enabled us to cross seas, build skyscrapers, race Ferraris.

But a problem arises with Euclid’s Fifth Postulate. In its original form, it says that if a straight line crosses two other straight lines, and those intersections form interior angles on the same side that add up to less than 180 degrees, then at some point those two other straight lines have to meet somewhere. (Most of us know the Fifth by simpler words: “Parallel lines never meet.”) It’s because of the Fifth Postulate that we get the Pythagorean Theorem and proof that a triangle’s angles sum to 180 degrees.

A postulate is supposed to be self-evident, but this business about parallel lines struck a nerve with mathematicians. It didn’t seem as intuitively convincing — Euclid didn’t even invoke the Fifth for most of the propositions in Elements. These troubled scholars spent millennia wrestling with it, and finally, in the early 19th century, they began to ask: What if the Fifth doesn’t have to hold?

That question changed everything. Violating Euclid’s Fifth wasn’t just an irritation, they realized. It was a gateway to exotic new geometries that were still self-consistent.

The idea of breaking Euclid’s Fifth attracted big thinkers of the time, including Carl Friedrich Gauss and Nikolai Lobachevsky. One of the most remarkable figures was János Bolyai, a young, aspiring mathematician from Hungary who was one of the first to forge the rules of this new geometry. In 1820, he undertook a radical plan to thwart Euclid. János realized that relaxing Euclid’s Fifth Postulate opened new windows to stranger, non-Euclidean geometries.

His father, Farkas, was not pleased, using language we don’t often hear from mathematicians. Or fathers, for that matter.

“For God’s sake, please give it up,” Farkas wrote to János.

“Detest it as lewd intercourse,” his letter continued. “It can deprive you of all your leisure, your health, your rest, and the whole happiness of your life.” Farkas, himself a mathematician and a lifelong friend of Gauss, noted that he, too, had once challenged Euclid. “I have measured that bottomless night, and all the light and all the joy of my life went out there.”

Hyperbolic geometry is another well-known kind of non-Euclidean geometry. A hyperbolic plane floating in three dimensions doesn’t look flat; it looks more like a Pringles chip or a saddle. It’s curved everywhere. If you’re standing on a hyperbolic plane and take a step in one direction, you’ll rise; if you turn 90 degrees and take a step, you’ll go down. In hyperbolic space, the angles of a triangle add up to less than 180 degrees.

Near-forgotten studies dating back more than 100 years suggested that hyperbolic geometry could help explain visual perception. In 1902, German scientist F. Hillebrand conducted darkroom experiments — and about 10 years later, W. Blumenfeld repeated them — in which volunteers were asked to look straight ahead with their heads fixed. Then they were asked to arrange a number of glowing lights in parallel lines, moving outward from their heads, so that each line was the same distance away from their line of sight. At the end of the experiment, it should have appeared that they were staring down the middle of an alley.

But these experiments revealed a paradox: The lines that the volunteers perceived as being straight and parallel were neither. Instead, the lines consistently followed curves. In the 1940s, work by German-born mathematician Rudolf Luneburg, working at the Dartmouth Eye Institute, helped explain why parallel lines differ in perception and reality. He recognized that through binocular vision, we perceive a three-dimensional map of our surroundings that includes both the shapes and locations of the things around us. He set out to derive a metric, a way to translate between physical reality and what we see.

Luneburg and his collaborators concluded that the rules of perception are not only non-Euclidean, but also are better represented by hyperbolic geometry. Decades later, in 1983, philosopher of science Patrick Heelan similarly argued for the existence of hyperbolic visual space; Heelan also pointed out painters like Paul Cézanne, Vincent van Gogh and Joseph Mallord William Turner depicted hyperbolic structures in their work.

The Geometry of Smell

Today, the affair isn’t settled. Researchers continue to probe the structure of perception networks, and some recent experiments offer evidence that visual space is indeed non-Euclidean. In a 2018 study, researchers reported that people rank images created using non-Euclidean geometries as being more realistic than those using the kind of Euclidean perspective we faithfully analyze in high school.

Sharpee says the night sky offers compelling evidence for hyperbolic perception. We see the dark cosmos as a dome, but astronomical distances are distorted. Children reach for the moon because it looks close enough to touch, she notes, but “distances are compressed.”

And that may be the key to unlocking the hyperbolic secrets of perception: Its properties only emerge on large, encompassing scales. “Any curved geometry on a small scale is Euclidean,” she says. The triangle formed by Newark, New Jersey; New York City; and Nyack, New York, follows Euclidean rules. “It’s consistent with a flat-Earth hypothesis,” she says. “But if we talk about the distances from New York to London to Melbourne, it’s not.”

That’s a central idea in her olfactory map, which is large in terms of its complexity. It’s tempting to assume that odor molecules with similar molecular structures would be perceived similarly. (This is analogous to thinking that we perceive parallel lines as parallel.) But that’s not what Sharpee found. She analyzed chemical structures of common odors and the results of experiments in which volunteers were asked to group similar smells together.

Her findings suggest that the human brain groups odors according to how often they occur together, rather than according to their molecular makeup. When she created a map of these odor clusters, Sharpee found that the distance between similarly structured molecules was best represented using ideas of distance from hyperbolic geometry, rather than Euclidean. Her work indicates that we might learn more about how the brain organizes perception information if we approach its organizational structure as a kind of curved space.

Hyperbolic geometry, that math of scoundrels, has also become useful beyond perception in modeling the complex structures of the brain. In a forthcoming paper, physicists in Barcelona modeled brain networks across a range of animal species. They found that neurons don’t necessarily communicate with the neurons closest to them in space — which you might expect if you were looking for Euclid — but instead form relay networks that follow the rules of a different, more exotic geometry. Hyperbolic space “provides almost perfectly navigable maps” of the web of connections in brains in a variety of species, they reported. Hyperbolic geometry, they say, suggests “a new cartography of the brain.” Similarly, some computer scientists note that hyperbolic geometry offers an appealing way to organize the big datasets needed for machine learning.

“Hyperbolic geometry is a very natural way to represent the structural complexity of the brain,” says physicist Antoine Allard at Laval University in Quebec, who worked on the cross-species study while a postdoctoral researcher at the University of Barcelona.

Not bad for a renegade math field, born of a bottomless night.

Stephen Ornes is a science and math writer who lives in Nashville, Tennessee. His book Math Art: Truth, Beauty, and Equations includes artists for whom non-Euclidean geometry is a creative muse.