An Inside Look at Cassini's Best Images 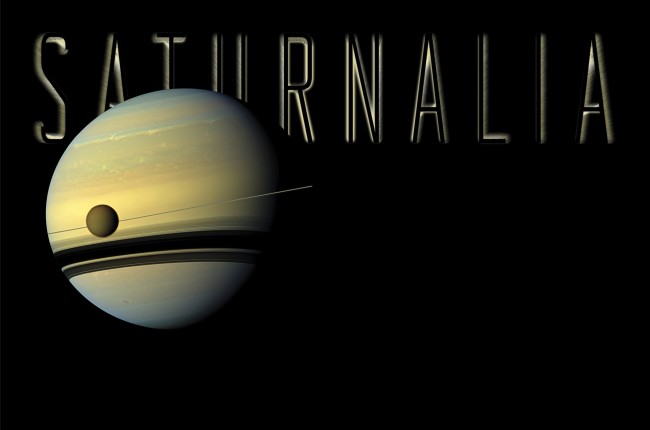 These images were featured in our March 2013 feature "Saturnalia." Read the whole thing here.

Porco realized she was witnessing the subtle change of seasons on Saturn, where each full cycle lasts 29.4 years. Ultraviolet radiation from the sun kicks up haze in the atmosphere. In the winter, when the sun is at a shallow angle, the haze subsides; as a result, the atmosphere clears up and the blue color appears. An observer floating in Saturn’s winter clouds would look up and see, incredibly, an arc of rings hanging over an Earthlike blue sky. 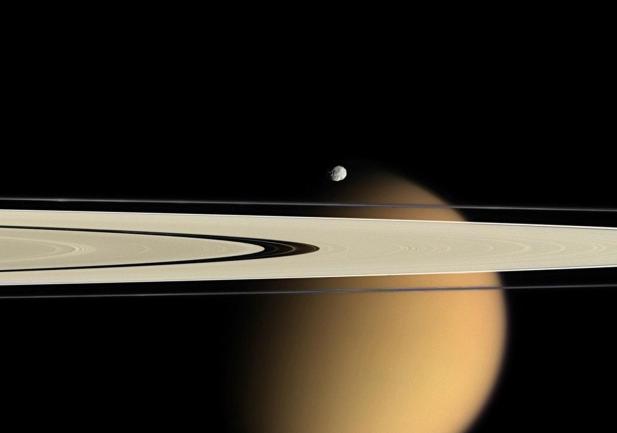 Titan looms behind Saturn’s brilliant rings and the small, battered moon Epimetheus. Saturn’s largest moon by far, Titan has mystified astronomers for more than 300 years. When the Voyager 1 probe flew by in 1980, scientists were disappointed to see nothing but a featureless orb cloaked in opaque smog. Scientists would have to wait until the Cassini mission to learn what lay beneath Titan’s thick atmosphere. “It’s been like a Jules Verne adventure come true,” Porco says. “It’s another milestone in coming to understand our cosmic neighborhood.” 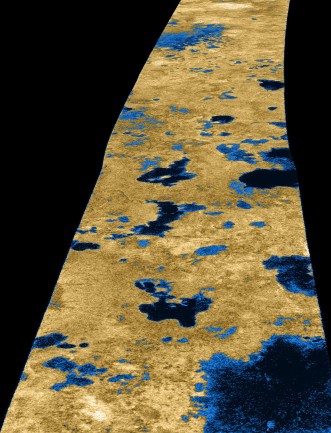 Using radar, infrared, and visual imaging, Cassini has revealed a string of ethane and methane lakes on Titan, making it the only other known world with bodies of liquid on its surface. The image here was created by Cassini's radar, then false-colored to highlight rough plains (tan) and smooth lakes (blue), which seem to be filled by seasonal hydrocarbon precipitation. 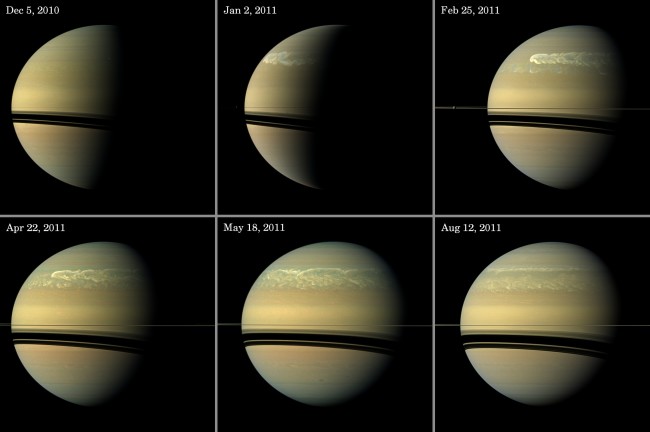 A storm began crawling across Saturn’s northern hemisphere in late 2010 and grew to gigantic proportions, encircling the planet before it dissipated two-thirds of a year later. This sequence of images showing the storm’s development “illustrates the value of being in orbit around a planet,” Porco says. The storm strangely resembled equivalents on Earth: It probably dumped rainfall of liquid water, Porco says, and Cassini’s cameras picked up flashes of lightning. 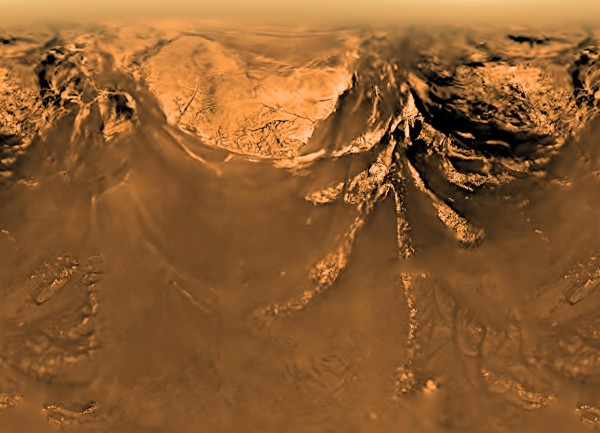 When Cassini dropped the European Space Agency's Huygens probe onto the surface of Titan in 2005, scientists were surprised to discover an Earthlike world with craggy mountains, broad plains, eroded coastlines, and familiar-looking weather patterns. “The slow reveal of Titan is one of the most thrilling things we’ve done on Cassini,” Porco says. This panorama was assembled from images taken about 6 miles above Titan’s surface. 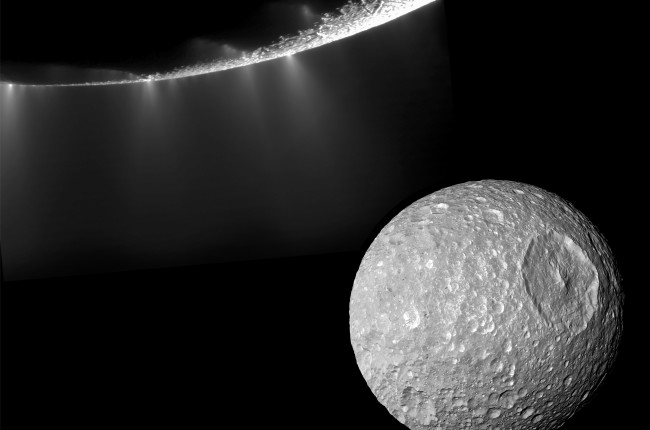 At least 30 separate water-ice geysers shoot from the moon Enceladus in this image. After discovering this remarkable activity in 2005, Cassini flew through the plumes and found them full of life-friendly molecules.

“Our discovery of salty liquid water bathed in heat and suffused with organic compounds under the south pole of Enceladus is, in my opinion, the most exciting discovery that has ever been made in our solar system,” Porco says. “It’s a habitable zone, and it’s accessible.”

Further observations will clarify how often the jets erupt and what produces them. A future spacecraft could collect ice from the plumes and see whether it contains biological compounds—or even living organisms. “We should go to Enceladus,” Porco says.

Pockmarked Mimas, whose enormous crater has earned it the nickname “the Death Star moon,” is, at just under 250 miles in diameter, the smallest spherical object in the solar system. 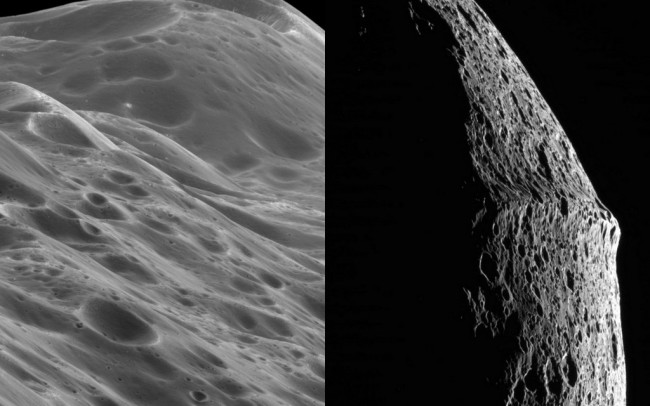 Saturn’s third-largest moon, 900-mile-wide Iapetus, is girded at the equator with a unique ridge of mountains (photo on the left and in detail at right) that reach a height of 6 miles, taller than Mount Everest. “We think it’s basically a remnant of a time when Iapetus spun more quickly and was mushy and warm,” Porco says.

Iapetus then cooled while still spinning rapidly, researchers believe, freezing its equatorial bulge in place. Cassini also resolved a longstanding mystery about why one half of the moon’s surface is 10 times as bright as the other: The leading hemisphere of the moon picks up dark debris that is warmed by the sun, while brighter ices condense on the colder, trailing hemisphere. 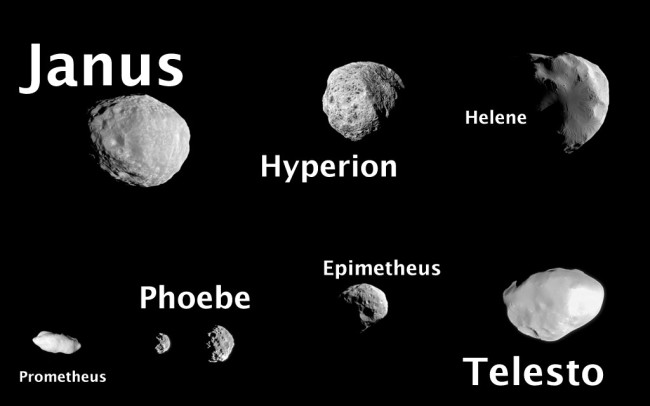 In addition to its large moons, Saturn is attended by what Porco calls “flotsam”—dozens of small, irregularly shaped satellites notable mostly for their spectacular diversity. Among these oddballs are the potato-shaped Prometheus and its cratered neighbors, Epimetheus and Janus.

The smooth, icy surface of Telesto sets it apart from most other Saturnian moons, which are heavily cratered. The surface of Helene appears to have been sandblasted by the many particles swirling around Saturn. Both Telesto and Helene are “Trojan moons” that share their orbits with larger companions.

Spongy Hyperion’s low density suggests that half of its bulk consists of empty space. Phoebe, the largest of Saturn’s irregular moons, circles Saturn in an irregular, backward orbit. 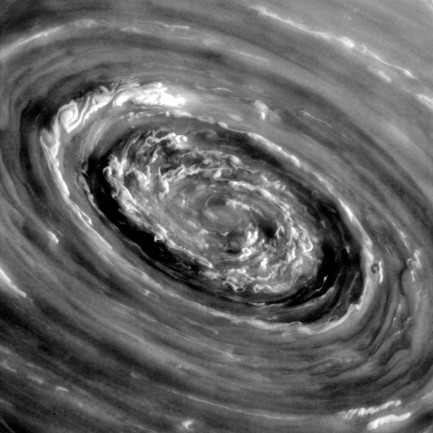 A cyclone more than a thousand miles wide, dotted with storm clouds, whirls above Saturn’s north pole. The maelstrom is centered within the planet’s powerful jet stream, which marks out a peculiar, hexagonal weather system large enough to swallow four Earths. Cassini transmitted back this mesmerizing view on November 27, 2012. 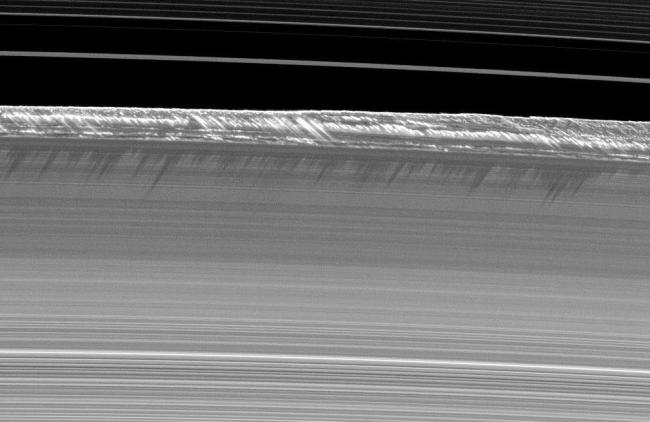 The glancing rays of the sun, shining almost exactly along the plane of Saturn’s flat rings, draw long shadows from subtle features that bulge out from the plane to a height of up to about 1.5 miles.

“We never dreamed we’d see things like that,” Porco says. “But there they are. We can’t see these structures when the sun is higher.”

Astronomers believe large moonlets up to at least a half-mile in size may hide among the rings, which themselves are only about 30 feet thick; the taller vertical structures visible here could be ring material that “splashes” up when the fine particles of the rings collide with these moonlets, much as water at the sea’s edge can splash up and over a rock.

Saturn’s dazzling ring system consists of innumerable small, frozen chunks, composed mostly of water ice. It contains seven officially named rings, named alphabetically in their order of discovery. Those rings, in turn, are divided into hundreds of finer structures defined mostly by gravitational interactions with Saturn’s moons. From the inner D ring (too faint to be seen in this image) to the outer F ring, the rings span about 46,000 miles. 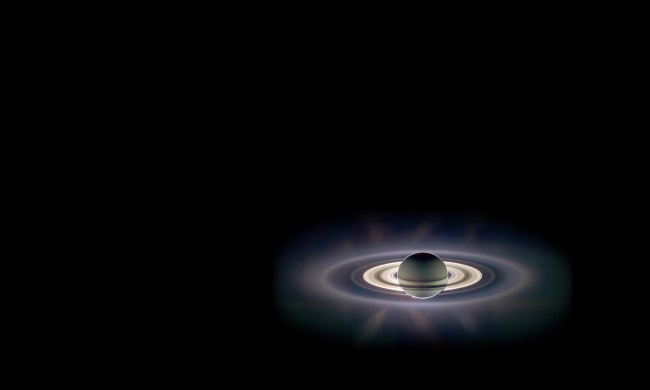 A solar eclipse from the point of view of Cassini reveals Saturn in a way never seen before. With the planet’s orb blocking out the sun, the rings emerge in spectacular detail. The image also reveals some faint, previously unknown rings. But the most beguiling aspect of this image is the pale blue dot, poised just inside the G ring. That speck of light, almost invisible in the distance, is Earth.

The SciencesAstronomers Spy Phosphine on Venus, a Potential Sign of Life
Recommendations From Our Store