An Eye for Ants

As the Harvard Museum of Comparative Zoology's ant collection rapidly grew in the 1950s, one woman worked behind the scenes with extraordinary spreed, accuracy and artistry. Today's researchers are still reaping the benefits. 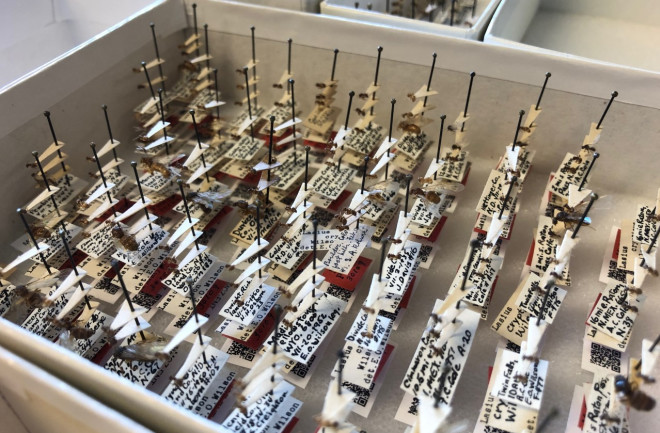 The night after their wedding in 1954, my grandparents sat on the bed in their motel room, counting the cash in my grandpa’s pockets. There was barely enough to open a bank account. So, the next morning, Eleanor Lowenthal — my grandmother — in desperate need of income to put her husband through graduate school, walked into the Harvard Museum of Comparative Zoology. There, she convinced some of the most prominent scientists in the world that she was the perfect person to mount and catalog their burgeoning ant collection.

At the time, a promising graduate student named E.O. Wilson was coming up in the department. Wilson, who passed away in December 2021 at the age of 92, was called the “father of biodiversity” and the “heir of Darwin.” The myrmecologist — an entomologist specializing in ants — published more than 430 articles, among them some of the most cited scientific papers in history, and wrote over 30 books, including 2020’s Tales From the Ant World. He also received dozens of awards, from the Pulitzer Prize to the National Medal of Science.

When Eleanor joined the department in the ’50s, researchers around the world were racing to collect and catalog specimens. As Wilson shifted research toward smaller, less glamorous species that nonetheless held ecological significance, he set the stage for conservation biology, centered on preserving ecosystem biodiversity. Behind the scenes, technicians like my grandmother preserved the specimens that furthered Wilson’s work and continue to provide new insights and opportunities for researchers across the globe.

As a teenager, Eleanor spent hours roaming the halls of the American Museum of Natural History in New York City, flipping through gift shop books about insect mounting. She once had kept a praying mantis in a glass jar for a whole year. But that was the extent of her entomology experience.

During her job interview at Harvard, when Philip Jackson Darlington, one of the most influential zoologists of the 20th century, asked Eleanor about her specialty, she replied, “Oh, I like everything.”

“He probably realized right then that I didn’t have a specialty,” she says.

She’d worked in a hardware store in Mamaroneck, New York, during her high school summers, but none of the shops in Cambridge would hire a woman, and she had no typing skills to be a secretary. She had dropped out of the Tyler School of Fine Arts to marry; that artistic background was a selling point or the Harvard job, and she was hired on the spot.

These days, artistic backgrounds are common for volunteers and interns and even researchers, explains Crystal Maier, the current curatorial associate and collection manager for entomology at the museum. After all, if art is making something from what exists, and science is about making possible what comes next, at the intersection lies the act of preservation. At the time, however, hiring a 21-year-old woman who’d dropped out of art school was a significant gamble.

It paid off. Eleanor’s job as a technician required the same manual dexterity and coordination that art school had demanded. She began each day at the museum mixing fresh glue to the perfect consistency. Then she pulled the dead ants from their alcohol vials and set them out to dry. Some ants were miniscule — barely 3 millimeters long — and their thin legs were tangled like steel wool, requiring patience and a careful hand. After writing a label for each specimen, she’d balance the ant’s thorax on the corner of a tiny cardstock triangle with a spot of glue, then spear the pin precisely through the handwritten label and cardstock.

The job required her to work quickly, yet precisely. “The average person never really hears about the machinery and the expertise and the effort that goes into it,” said Wilson in an interview before his death.

Rushing could risk ruining a rare specimen, but Eleanor could process ants as quickly as Wilson could mail them back from his expeditions to Australia and Papua New Guinea. She sometimes mounted as many as 200 a day.

And Eleanor’s advantage wasn’t just dexterity and fine motor skills: She also had an exceptional memory. In the mornings, as she was handed vial after vial filled with ants, the associate director detailed the contents, scientific names, and specimen’s origins to be written on the identification tag. My grandmother retained it all, and the researchers were floored that she never wasted a minute writing anything down.

Ulric Neisser, a researcher at Cornell University, wrote about Eleanor’s abilities decades later in his book Memory Observed, noting that Eleanor’s supervisor at Harvard “confirmed … the numbers of insects she had to remember on a typical day. She was the best technician who ever worked for him.”

With new species regularly being discovered, Wilson recalled the department had “a continuous, rolling sense of discovery and adventure.” The collection is now home to approximately 1 million ant specimens. Eleanor felt lucky to tap into to conversation around her, which included Wilson’s early work on the ant genus Lasius, using the collection she was mounting. Noting how characteristics such as antennal length and head shape diverged in specimens from eastern North America (where related species shared territory) led Wilson to develop the theory of character displacement, which explained that when two similar species come into contact with each other, they often quickly evolve to differentiate themselves.

Wilson frequently used ants as a model to help paint a much larger picture of evolution or biodiversity. “Ants are excellent — the variety of them and the environmental influences — they’re excellent subjects to use in developing the discipline of ecosystem studies,” he explained. They show, for example, that cooperation can evolve as an effective species survival trait — in ants, as well as humans. According to Wilson, ants are “not something that the average person would think about, not ever, once,” yet they’ve contributed significantly to our understanding of the natural world.

It wasn’t a coincidence that Eleanor found work in entomology. Wilson’s high-profile research on ants cracked an opening for women in the previously male-dominated field of conservation, which had been funded largely by hunting dues and was centered around studying big game in the first half of the 20th century. Though the only woman in her department aside from the secretary, Eleanor was one in a long line of female technicians in the Harvard Entomology Department, humble workers making largely unseen contributions.

“Especially in entomology collections, there’s so much work that goes into these specimens that doesn’t get credited,” says Maier.

Even when women’s early work has been credited, the language used to describe their contributions often minimized their role in the team, not mentioning them by name. Maier recently discovered some department reports from the mid-1800s, including lines such as, “A large amount of spreading and setting insects was done by the lady assistant,” and, “The collection has been remarkably free from pests … due to the incessant care of the lady assistant.”

“It was the case for a very long time that women were in the role of assistants,” says Etienne Benson, associate professor of history and sociology of science at the University of Pennsylvania. “Women were moved into positions that didn’t have as much status,” he says, “but these jobs turned out to be really critical and take a lot of expertise.”

Eleanor was also responsible for the day-to-day preservation of the entomology collections; because of this skillful preservation, even 250-year-old specimens still look as good as the day they were collected. The Harvard Museum of Comparative Zoology functions like a library (specimens can be borrowed for study or examined on site), and serves as a training hub for the next generation of scientists who use the collection in ways Wilson and my grandmother probably never imagined.

“In the past couple of decades, there’s been a renewed interest in going back to natural history collections and trying to use them for different purposes,” Benson explains, such as testing bird feathers from the 1950s for toxic chemicals.

Now, photographers are digitizing the Harvard ant collection using photo-stacking techniques to create 3D images of each ant, and Maier says they’re only beginning to unlock the potential of the collection. “We’re working with researchers now who can even pull DNA from these older specimens,” says Maier, “and so the boundaries keep getting pushed further and further, and we’re able to pull more and more data out of these specimens than we ever thought we could.”

Eleanor didn’t realize the impact of her contributions at the time — the technician role was just a job that paid $38 a week. Her work over several years at the museum was a sentence in a larger story: She also competed in international sailing competitions, met with the pope, built a harpsichord, and taught her granddaughter to weave on a loom. But she’s come to appreciate the significance of her work on a project that spans centuries. “You can see how it goes from one era to another,” says Eleanor. “It’s so important to have this library for people to make connections and new discoveries.”

As the collection grows year after year — each ant containing untapped data that can expand our understanding of evolution, ecosystems, and symbiosis in the natural world — technicians like Eleanor have ensured they’re preserved for whomever comes next.

Shoshana Akabas is a writer and teacher based in New York City.