An Eye for an Eye

Two types of retinal prosthetics could restore eyesight to the blind. 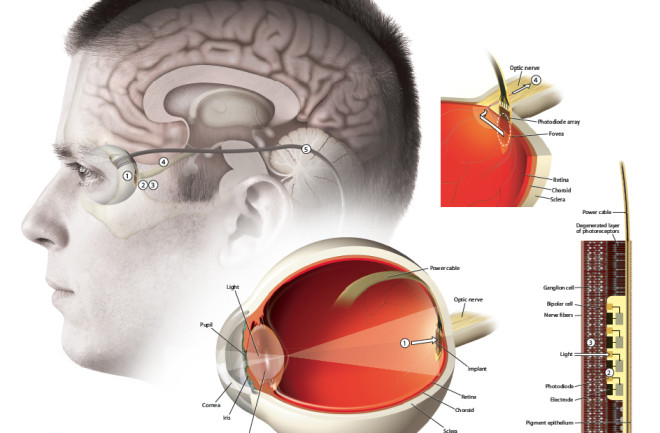 The retina lives at the back of the eyeball, and with its thin layers of modified neurons, it is almost like a small additional patch of brain. The rearmost layer consists of photo receptor cells that convert patterns of light and dark (collected by the eye’s lens) into a set of electrical impulses. Those impulses provide the raw data of the visual universe. As with brain cells, the neurons of the retina are basically irreplaceable. Vision diseases such as macular degeneration and retinitis pigmentosa, which kill off photoreceptor cells, usually end in blindness.

Fortunately, the rest of the eye’s vision-processing machinery remains largely intact even after most photoreceptors are dead. In principle, a man-made prosthetic could take over the first steps of translating visual information into neural code, then send that information to the remaining vision-processing infrastructure. Such “bionic eyes” are already in development; two such devices are shown in detail below.

In one system, a miniature photodiode array is surgically implanted in the retina. The array’s light-sensitive materials translate visual information into electrical pulses that stimulate surviving retinal neurons, which interpret the signal and send it to the brain for processing. In a pilot study, the German company Retina Implant found that its array allowed its three blind subjects to perceive flashes of light and to distinguish large objects. One of the three could read a large clock and see large letters well enough to read simple words.

Another front-runner in the race to create a bionic eye is Second Sight’s Argus II, which uses a video camera mounted on glasses to capture the visual scene. A small computer, carried on a strap around the neck, converts data from the camera into electrical pulses that are transmitted wirelessly to a microelectrode array implanted on the retina’s surface. Argus II has been used for up to five years in more than 30 test patients, some of whom regained enough vision to use a crosswalk or sort light laundry from dark. Second Sight hopes to finish clinical trials and get regulatory approval to sell the device in Europe this year.

In one design for a bionic eye, the sensing chip is slid under the retina itself. Microphotodiodes on the array detect light and convert it into electric signals that can be read by the nerve cells remaining in the damaged eye. Drawing based on a prosthetic developed by Retina Implant.

1. Light is focused on the center of the retina by the natural optics of the eye.

2. Photons activate the photodiodes of the array, which convert light energy into electricity.

3. Electrodes stimulate surviving cells in the retina, such as the ganglion cells.

4. These cells generate neural impulses that leave the retina and travel along the optic nerve to the brain, which creates the sensation of sight.

5. The sensory array is powered externally by an electrical cable that travels under the skin and emerges behind the ear.

A different approach to a visual prosthesis uses a video camera mounted on glasses to capture images. That information is converted into a signal and wirelessly transmitted to a receiver positioned inside the eye socket. The signal then travels to an array placed atop the retina, where it stimulates surviving cells. Drawing based on a prosthetic being tested by Second Sight.