An Eruption at Rinjani in Indonesia Traps Hundreds of Tourists 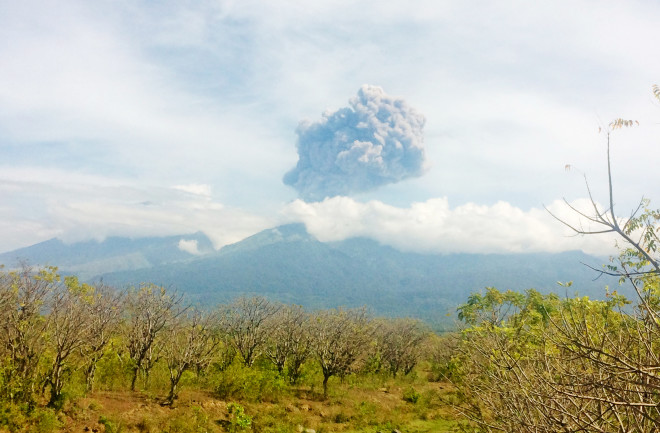 Mount Barujari, situated within the Mount Rinjani volcano, erupting in North Lombok, Indonesia on September 27, 2016. Antara Foto/Santanu Bendesa/REUTERS Indonesia's Barujari, inside the Rinjani caldera, is currently one of the most volatile volcanoes in the island nation. Yet it is a popular tourist destination, and for good reason: The vistas of the caldera and volcanic island within are breathtaking. However, whenever you visit a volcano---especially an active volcano like Rinjani---you put yourself at risk of being trapped, injured or even killed if the volcano erupts. Yesterday, Barujari had a moderate explosive eruption that created an ash plume that reached 2 kilometers (~6,500 feet) over the volcano. In most cases, an eruption like this wouldn't cause many problems beyond ash fall on the surrounding communities and interruptions in air travel. However, because Rinjani is a national park in Indonesia, over 1,000 tourists were in the vicinity of the volcano when it erupted. Indonesian authorities evacuated most of the tourists, however some chose to remain behind (and actually hide from the rescue workers!), likely for the thrill of being near an actively erupting volcano. Local authorities have sent teams out to find those who are still on the volcano---possibly between 130-390 people are stranded, with some choosing to stay against advice, some possibly lost. Now, this explosion may have been relatively small in the scale of volcanic eruptions. But you can't be sure as an observer what the volcano may do: The authorities who are paid to monitor the volcano and keep people safe within the park know best. Ash fall can contaminate water supplies and can pose a breathing hazard if you get caught in an area where winds are blowing volcanic glass shards. If you are too close, the potential for volcanic bombs or even pyroclastic flows increases significantly and many times, without obvious warning (unless you have a seismometer). Volcanoes are amazing features and their eruptions are astonishing to behold. That being said, when a volcano erupts, especially a volcano like Rinjani where explosive eruptions can happen often and unexpectedly, you should get to a safe distance from that volcano as soon as possible. Currently, the PVMBG (

Pusat Vulkanologi dan Mitigasi Bencana Geologi) has declared a radius of 3 kilometers around the volcano "off-limits" due to this increased eruptive activity and raised the alert to Level II.

This safe distance varies depending on the eruption, so you need to listen to local authorities and read up on the volcanic hazards before you go out to explore. You should know where you need to go and how far you should get away in case you see an eruption starting. Doing so could save your life. Carry a dust mask, extra water and maybe even an emergency transponder if cell phone coverage is poor. Being prepared with both information and supplies could save your life.