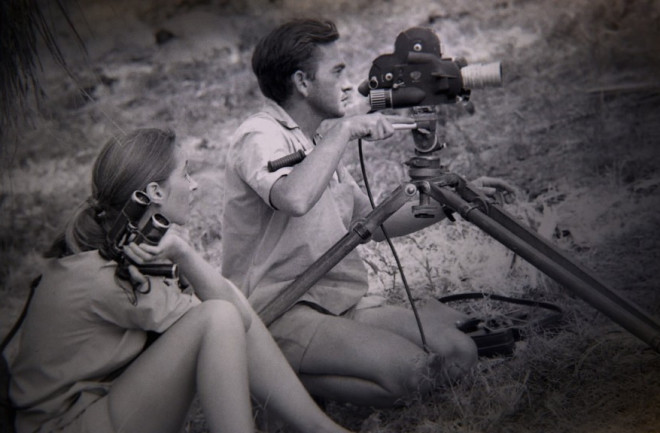 Jane Goodall at Gombe with Hugo van Lawick and his omnipresent camera. (Credit: Jane Goodall Institute) During the 1960s, humanity's place in the universe changed dramatically as Soviet and American astronauts ventured off the planet and (for the Yanks, at least) onto the surface of the Moon. During those same years, humanity's place on Earth changed rather dramatically, too, as scientists took a closer look at our primate relatives and discovered that they are a lot more like us--far more complex and sophisticated--than anyone had suspected. One of the scientists most responsible for the latter revelation was not, by traditional standards, a scientist at all. Jane Goodall was all of 26 when she arrived at the Gombe Stream in Tanzania in 1960 to study the local chimpanzees. She had no college degree, no formal stamp of high academia. What she had was extraordinary perception, persistence, and a lack of blinding preconceptions. Due to a felicitous combination of circumstances, we are now able to relive her singular discovery process in the electrifying, astonishingly beautiful documentary Jane. The story of this new film begins early in Goodall's career, when wildlife photographer Hugo van Lawick arrived at Gombe to document her explorations on behalf of National Geographic. Over time van Lawick became her lover, husband, father of her child, and ex-husband. He also became the all-watching eye whose footage yielded a 1965 documentary, Miss Goodall and the Wild Chimpanzees. Fortunately for us, the story does not end there. In 2014, archivists found more than 100 hours of unseen footage by van Lawick, material that was thought long lost. Working with this wealth of material, documentary filmmaker Brett Morgen has created a completely new retelling of Goodall's work at Gombe. It records a landmark moment in the history of human self-awareness, but the film is neither portentous nor pretentious. It is beautiful, delicate, and above all loving. I caught up with director Brett Morgen to find out how he pulled off this bit of cinematic magic, and what the eponymous Jane thought about revisiting the moment that made her one of the most famous scientists on Earth. [For more science and science-culture news, follow me on Twitter: @coreyspowell.] I was surprised to learn that you were reluctant to work on the movie. Why? Morgen: Jane and I had one major thing in common: Neither one of us wanted to make this film. When we were approached about the film, we both had the same reaction, “Haven’t there been dozens of Jane Goodall films, and is there any reason to make another one?” But I’m happy to report, having made the film, we are both thrilled we ended up working through our issues and arriving where we are today.

Miss Goodall and the Wild Chimpanzees,

and what I saw was totally revelatory. I felt that I was looking at footage that had the weight and significance of the NASA Moon landing. However, it was very much rooted in the language of its time. By our present-day standards it felt very anachronistic. It also did what I have rebelled against throughout my career: It never allowed the audience to experience anything. Part of that is because it was narrated by Orson Welles--nonstop narration from top to bottom! Like ‘Jane steps into the jungle. She looks to the left. She sees a bird. She looks to the right. She sees a chimp.’ What I try to do in my films is create immersive experiences. I like to invite the viewer to see the world through my subjects’ eyes, to experience what they experience in a cinematic manner. With 140 hours of footage, I thought I would have an opportunity to do this story justice. It also was clear that the 1965 film, as wonderful of a time capsule as it is, simply could not be the last word. It was a film that Jane and Hugo absolutely hated. There was an incredible need—I didn’t know it at the time--to make this film. What makes the movie so timely to you? Morgen: Sometimes we choose films and sometimes they choose us. I can only think that somehow this film was calling out to be made when it was. The irony that we are releasing a film about a woman who overcame insurmountable odds to achieve her dream without compromising her integrity in any way shape or form, coming out the same week as these Harvey Weinstein stories…it’s just too uncanny. The experience of watching the movie certainly was uncanny. It looked so intimate and detailed that I kept thinking I was looking at reenactments. It was hard to believe that such footage could exist. Morgen: The footage didn’t look the way it does now when it came to me! The colors had faded, and didn’t exist at the levels we can achieve today. Reversal film looks gorgeous when it’s new, but it lost some of its shine. We did about 220 hours of color correct. It’s called ‘color correct’ but a lot of that time was spent doing contrast grading. Contrast grading is where we go through a shot and we put windows where we can isolate and identify any part of the frame that we want to affect. Like a photographer, we’d go through every shot and direct the eye to go where we want it to go by defocusing or darkening or softening areas of the frame that we weren’t interested in people traveling to. That is what gives it its modern look. If I didn’t do the grading it would have looked very flat. How did you know you were capturing the actual look and feel of Gombe? Morgen: I’d read Jane's book In the Shadow of Man. That gave me a goal of what we were trying to capture. We showed [the footage] to her before we locked the picture and she loved it. She felt that we had completely captured her experience in Gombe in a way she didn’t think was possible. When we saw it together at the premiere, it was an incredibly emotional experience. She was able to go back to that time, something she thought she never could do. There are so may layers to Jane Goodall's story: the science, the adventure, the personal discovery, the love story, the characters of the chimps themselves. How did you decide where to focus? Morgen: My initial approach was to do a modern retelling of the Garden of Eden. I looked at Gombe as this pristine analog of Eden. Everything changes on Jane’s arrival. Nothing would ever be the same again, for better or for worse. Second, I found parallels between the way I entered the film community and the way Jane entered the science community. When I started documentary filmmaking, most documentarians came from a school of journalism, and I had never been a journalist. Jane also rejected traditional scientific methodologies when she went to Gombe. If she hadn’t, if she had been more dogmatic about it, we wouldn’t be here today. She didn’t want to give the chimps numbers, she wanted to give them names. She wanted to know how they think. She was interested in their behavior and the motivations and rationale behind their behavior. My favorite part of the film is the four-month period where Jane isn’t able to encounter the chimps but she’s trying to figure out how they eat, how they sleep, how they mate, all these things so she’ll have better insight into why they do the things they do. To me, that was intensive immersion, which is parallel to what I do. Third, I realized we were telling a love story, but not so much a love story of a man and a woman but about a woman and her work. That was an amazing opportunity because it’s a story I haven’t seen on the screen before, to have a heroine who can have a child and not sacrifice her career, never sacrifice her integrity, never compromise. It was utterly inspiring and aspirational.

Flint, a young chimp at Gombe, is one of the many primate stars of Jane. (Credit: Hugo van Lawick/National Geographic) One part of the story I'd never heard about before was the pivotal role of her mother, who even came to Gombe to help out. Morgen: Sometimes movies have hidden heroes, and in the case of Jane, Vanna [her mother] is clearly the hidden hero. She has very limited screen time, but without it the film doesn’t really make sense. A reporter asked me, "What is the moral of the story?" It’s about listening, it’s about identifying with our children, not imposing our values upon them but recognizing their inherent worth and value, particularly as relates to young girls. Jane lived in a world where young girls, no matter how educated, were often overlooked at the dinner table conversations. Often they only received comments about their looks. But Jane was raised in a house of women, so she was never objectified or taught to feel inferior. She was given the type of confidence one would need to pursue a dream of living with in Africa with wild animals. I think it’s very clear that without Vanna none of this would have ever happened. Goodall is now very active in promoting conservation. Is that part of what you meant by the Garden of Eden--that there's a strong conservation message driving the movie? No! That was not anything I was interested in. I believe that the reason the film resonates so well with audiences as a message film is because there was no message that I was trying to sell them in terms of conservationism. Jane’s life is the message. Nature or conservation films generally preach to the choir, so very little change comes about. With Jane we were trying to tell more than that message. If at the end of the day one chooses to get involved with Roots & Shoots or with conservationism, that is home run. I certainly can see how one would arrive there, and I’m thrilled if that's the outcome. But it’s not anywhere near my thoughts on making the film. It’s a film about empowerment. It’s a film about a real-life superhero.