Amplituhedron May Shape the Future of Physics 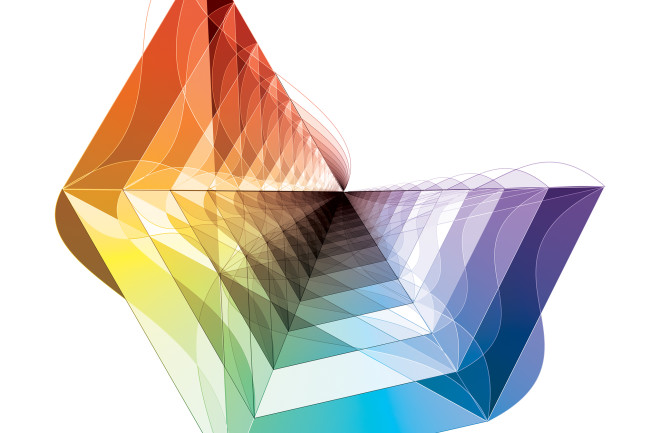 Physicists have long struggled to understand exactly what happens after subatomic particles collide. For decades, the best tool involved basic sketches (called Feynman diagrams) of each possible result. For all but the simplest scenarios, this method fills pages with drawings and equations.

A new computational insight in 2004 dramatically reduced the amount of paper required to describe a collision, and these new formulas combined multitudes of Feynman diagrams into a single mess of math. Last year, Princeton physicist Nima Arkani-Hamed was analyzing the formulas in search of a better way to simplify these quantum calculations. Using only pen and paper, he discovered a new kind of geometric shape called an amplituhedron — one that hints at a new way of seeing the universe.

Arkani-Hamed noticed the formula could be rearranged and still yield the same answer. Like paleontologists brushing away dirt to reveal a fossil, he and his colleagues found the pieces of a shape within the math — pieces that together form a multidimensional amplituhedron. The shape’s dimensions — length, width, height and other parameters (hence “multidimensional”) — represent information about the colliding particles, and the equation describing its volume also describes the particles that emerge from the collision.

This result, the volume, is a single term that fits on a space the size of a napkin.

Unlike the older methods for exploring particle collisions, the amplituhedron is not rooted in a world where a particle starts in one place and time before moving to the next location and moment. That is, the shape does not exist in space-time — it does not rely on a conception of the universe that theoretical physicists suspect might be incorrect. (When they try to knit together large-scale and small-scale forces, such as gravity and those that hold atoms together, the assumption of space-time leads to mathematical inconsistencies, a clue that something’s amiss with current assumptions about the universe.)

“We’ve known for decades that space-time is doomed,” says Arkani-Hamed. “We know it is not there in the next version of physics.” Though the collisions described by the amplituhedron still occur in space-time, the object itself is outside it, providing a possible way to imagine a world not woven of this fabric.

The new shape is intriguing, says physicist Lance Dixon, a pioneer in the field of particle collisions, but he cautions that so far it can only describe particle collisions within a simplified version of quantum theory — the results don’t yet translate to the real world. Arkani-Hamed acknowledges it is a “baby example”; he calls it “step zero” in the journey to create a new kind of physics — a project on par with the discovery of the probabilistic particle collisions themselves.

For now, the amplituhedron offers a hint of what this strange new world could look like.

[This article originally appeared in print as "Shaping the Future of Physics."]