America Once Considered Nuking the Moon 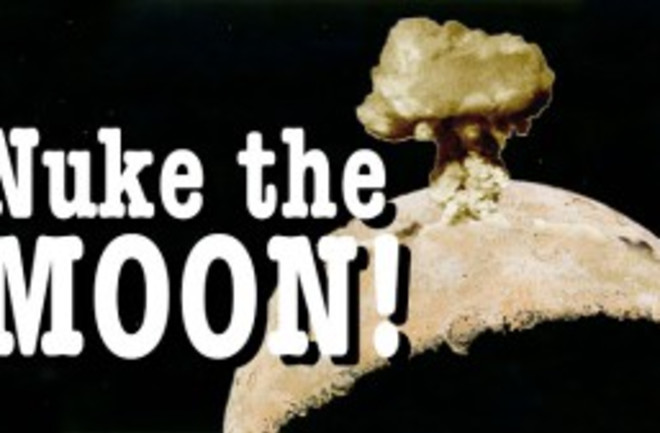 The American reaction to Sputnik was diverse, to say the least. Some people were terrified. Some were excited by the scientificprospects of the now-dawned space age. Others immediately jumped to ways to match then beat the Soviets. And one Air Force Physicist, Leonard Reiffel, thought the best course of action in the wake of Sputnik was to nuke the Moon... [embed]https://www.youtube.com/watch?v=8PogaZ1Y7hw[/embed] The idea was summed up in a 1958 report somewhat innocuously titled A Study of Lunar Research Flights. It had, Reiffel wrote, a threefold rationale. It was a fitting scientific, military and political response. On the scientific side, Reiffel envisioned soft landing three identical scientific instrument packages carrying seismometers and radiation detectors at random spots on the visible face of the Moon. These in situ stations would complement optical and spectroscopic observations from ground-based observatories and high altitude telescopes hoisted by balloons. Detonating the nukes then studying the nuclear reaction would teach scientists about the Moon’s environment and history, ultimately helping us understand the Earth. On the military side, detonating a nuke on the Moon would give American scientists a first-hand look at the realities of nuclear weapons in space – what to expect from those detonated by either the United States or by the Soviet Union. This experiment would teach scientists how to detect nuclear material in space. It would give them a clearer understanding of how capable and effective nuclear weapons would be in space, going a long way to determine whether nuclear warfare would even be feasible in space. But that was only part of the military benefit. Closely tied was the political motivation. Reiffel does reference the positive position to be gained by America being the first nation to detonate a nuke on the Moon. It would be a “demonstration of advanced technological capability,” and certainly prove to the Soviets that the R-7 that launched Sputnik and Sputnik II was no match for the massive American missiles! Of course, nuking the Moon risked seriously damaging America’s reputation on an international standing. Unfortunately, the meat of the military side of Reiffel’s proposal is missing. The details are in the second chapter, which directs the reader to Volume II of the report, which is unavailable to the public. Volume I is all about the science and makes no specific mention of the type or size of nuclear explosives Reiffel proposes detonating near the Moon. As we know, the project was abandoned and we explored the Moon with peaceful programs. Though there was nuclear material sent to the Moon. Some Apollo surface experiments were powered by radioisotopic thermoelectric generators or RTGs, the same power source that’s currently powering Curiosity’s trek across Mars. But the Apollo RTGs weren’t detonated in the name of science – or in the name of showing an adversary who’s boss.

Source: A Study of Lunar Research Flights. A previous version of this article originally appeared on Discovery News Space, which is gone now. Sigh.