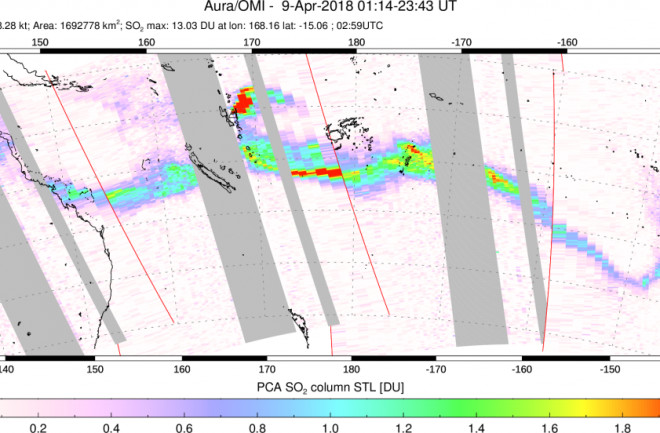 April 9 Aura/OMI map showing the sulfur dioxide plume from Ambae (Aoba) in Vanuatu stretching across the South Pacific. NASA (via Simon Carn). Last fall, Ambae (aka Aoba) made headlines after almost 13,000 people had to be evacuated due to the increasingly violent eruptions from the volcano in Vanuatu. The activity subsided after a few weeks and people were able to return to their homes. Since November of last year, the volcano settled down, producing minor steam-and-ash plumes from the summit caldera lake, Lake Voui. However, starting in mid-March, the volcano has become more restless again. Ash from eruptions (see below) have fallen on residential and agricultural regions of the small island, contaminating water and potentially becoming a real hazard for the people living on the island again. The Vanuatu Meteorology & Geo-Hazards Department (VMGD) notes that these new eruptions mark a change in character for the volcano to more ash-rich, explosive eruptions versus the types that occurred in the fall of 2017. This makes ash a larger hazard for air travel or water supplies, but also opens the possibilities of volcanic mudflows (lahars) related to ash deposits and heavy rains. There have calls for renewed evacuations of the island's residents due to this new bout of activity (along with some major flooding from a recent cyclone).

Image of the ash-rich grey plume from Ambae in Vanuatu, seen on March 27, 2018 by Terra/MODIS. NASA. Turns out that, although the eruptions since mid-March haven't made the news like the ones in the fall, they might be even more significant. Simon Carn (MTU) alerted people to a large sulfur dioxide plume emitted from Ambae in early April, captured on the imagery from Aura/OMI (see above and below). The eruption on April 5 may have emitted the most sulfur dioxide of any eruption since the 2015 eruption at Calbuco in Chile.

Dr. Carn speculates that this event was "missed" by the media (and pretty much everyone) because it appears to have happened at night, but likely produced significant ash during one of these eruptions. Some pictures on Twitter show the extent of the ash on the island, suggesting this was a pretty large eruption that occurred.

more photos surfacing of #manaro ash fall damage on #ambae in #vanuatu. government already evacuated 12,000 in november but all but a few have returned. an absolute disaster to subsistence farmers. no sign of smoke levels going down either. pic.twitter.com/BLn1VGRUMZ

Ash plumes earlier in the week reached as high as 6 kilometers / 20,000 feet, so we might guess that the ash and sulfur dioxide got that high during the April 5 event. By April 8. the sulfur dioxide plume from the eruption reached from near the eastern coast of Australia to Tahiti. Sulfur dioxide is one of the major volatiles (gases)

that volcanoes emit. If it gets injection into the stratosphere (at the latitude of Vanuatu, about 50,000 feet), then it can be spread rapidly and create the potential for cooling of the lower atmosphere at the sulfur dioxide is converted to sulfate that reflects/absorbs solar radiation. If it sticks closer to the ground, the biggest hazard might be acid rain associated with the sulfur dioxide reacting with water to form acid, like what happened in the U.S. due to burning of coal that was sulfur rich. Acid rain is damaging to crops and has been reported at Ambae during the new eruptive activity

. Whether or not this return to more vigorous eruptions at Ambae means that the volcano will continue to ramp up is anyone's guess. The VMGD have the volcano on alert status Level 3

(minor eruptions) with a 3-kilometer exclusion zone around the summit caldera lake, where the eruptions are centered. Large explosive eruptions have occurred at Ambae in the past 500 years, so if the unrest continues to increase, then evacuations could follow. Until then, we can watch the eruption to see if it continues to belch sulfur dioxide like it did on April 5.