With just time, talent and their own gear, citizen astrophotographers create brilliant and innovative images. 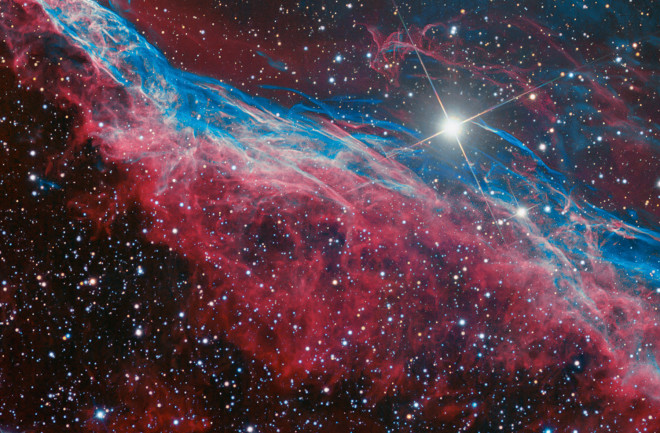 The Witch's Broom is part of the Veil Nebula. Learn how amateur photographer Robert Franke captured this image. | Robert Franke

A generation ago, many of these images could be taken only from mountaintop observatories or spacecraft. For instance, when the $1.5 billion Hubble Space Telescope revealed the stunning Pillars of Creation in 1995, amateur astrophotographers armed only with grainy film couldn’t come close to capturing such a sight. Today, one experienced amateur nearly matched Hubble’s photo using top-of-the-line astrophotography gear worth more than $60,000 — expensive, but a minuscule price compared with a major NASA project.

Rapid advances in digital camera technology have certainly helped, but cameras are only one tool in a very large box. A telescope mount needs computer control for pinpoint tracking. Powerful software is necessary to process huge image files. And everyone benefits from the Internet to share ideas, learn from one another and even to use websites that calculate exactly where to be and when to get the perfect shot.

The pictures on these pages are just a few examples of how savvy amateurs can capture the beauty beyond our horizon.

The Pillars of Creation

The Hubble Space Telescope’s 1995 image of the Pillars of Creation is one of the most iconic astronomy photographs. Pennsylvania photographer Bill Snyder wanted to try a wide-angle photo of the same object. He combined numerous images, totaling more than 20 hours of exposure from his home observatory and a remotely operated telescope in the Sierra Nevada mountain range of California. The final result matches much of the detail in the Hubble photo, but at a smaller scale. Snyder’s telescopes: 5.1-inch TMB and a 17-inch PlaneWave.

Known since ancient times as the Seven Sisters, the Pleiades Cluster (below, right) contains about 1,000 young stars that formed roughly 100 million years ago. This unusual view shows the cluster in the broader context of its local environment. The California Nebula, named for its resemblance to the state, is the cloud of glowing red hydrogen gas at left. California photographer Rogelio Bernal Andreo assembled this mosaic of images totaling 57 hours of exposure using a 4-inch Takahashi FSQ-106 telescope and an SBIG STL-11000 camera.

[This article originally appeared in print as "Amateur Power."]

If you’re at the right place on Earth at exactly the right time, you can see the International Space Station passing directly between you and the sun. Online software such as CalSky.com calculates where to be and when. Paolo Porcellana’s backyard in Italy happened to be one such place. He used a 4-inch Vixen ED100SF telescope and a PTG Chameleon camera to take multiple photos during the ISS transit, which lasted only a fraction of a second.

Jupiter With Io and Ganymede

The detail Damian Peach captured using an Earth-bound Celestron 14-inch telescope in Barbados rivals images sent back by NASA’s 1970s Pioneer spacecraft. Such land-based photos are possible due in part to small webcam-like cameras that snap thousands of photos in just a few minutes. Software then sorts the blurry pictures from the clear and compiles only the sharpest. This image also shows remarkable detail of Io and Ganymede. Peach photographed the moons separately and added them to this composite image, at the same scale. He used a Point Grey Research Flea3 CCD camera.

When the eclipsed sun rose over desolate Western Australia on May 10, 2013, Fabrizio Melandri of Italy was there to witness the unusual spectacle. The moon was at its farthest distance from Earth, so it couldn’t cover the entire solar disk. The result: a horn-shaped sun. Melandri used a Nikon D7000 and a 700mm telephoto lens to document the “ring of fire” eclipse.

Star Trails on the Beach

Sebastián Guillermaz of Argentina needed 268 photos to capture this scene at Mar de Ajo, south of Buenos Aires. In the days of film photography, one long exposure would do, but a digital camera cannot easily record long exposures without buildup of electronic noise, which degrades the image. Now, modern photo software combines the data of many shorter exposures into one time-lapsed photo. Guillermaz used a Canon 6D with a 14mm lens.

It used to take a space program to see Earth’s curvature like this. These days, a helium balloon and an automated camera can do the job, and a meteorological GPS device helps find the camera when it returns to terra firma. Patrick Cullis launched his Canon 5D camera with a 17mm lens from Boulder, Colo. It snapped this view of the Rockies and a distant moon hovering in the blackness from nearly 17 miles up.

A perfect balance of moonlight, the Milky Way and disk-like lenticular clouds set the scene for this dramatic panorama centered on Yosemite National Park’s Half Dome. California photographer Rogelio Bernal Andreo stitched together eight separate 30-second exposures for the final image. He used a Canon 5D Mark II camera and a 20mm Sigma lens for all the individual frames. “The unusual lenticular cloud formation on the horizon was worrying me at first, as I thought it would cover the rising Milky Way,” he says. “But in the end, it was almost a blessing, as it added a lot to the image.”

Photographer Robert Franke likes the left-to-right flow and variety of galaxies in this view of the massive cluster 250 million light-years away. “Although this is no Hubble Deep Field, over 1,000 galaxies are visible,” Franke said. From his Arizona observatory, he took 1,230 15-minute exposures using different filters over several nights to produce the final image. He used a 12.5-inch Ritchey-Chrétien telescope and an SBIG STL-11000 camera.

This synthetic color image was created with Ha and OIII narrow-band filters. These filters block out light pollution and the moon’s glow, if present, by allowing only specific wavelengths of light to reach the camera sensor. This greatly increases detail while giving a reasonable representation of the nebula’s color, said Arizona photographer Robert Franke. The Witch’s Broom is part of the Veil Nebula, the remnant of a supernova that exploded about 8,000 years ago. Franke combined roughly 25 hours of 15-minute exposures with a 12.5-inch Ritchey-Chrétien telescope over several weeks to make the final image.

The Pleiades and the California Nebula