[NOTE (added May 30, 2010): Thierry Legault, himself an extraordinary astrophotographer, has commented below with some issues he has with these images. His points are well-taken, and have given me pause. None of the claims Ralf has made for this imagery are physically impossible -- I checked the math, and I have a pretty good knowledge of image reduction and analysis -- but that does not mean they are correct. I want to be careful and say I am skeptical of these claims, but cannot say whether they are correct or not. In the future I'll be more careful in my own wording in my posts.]

Ralf Vandebergh, an astronomer in The Netherlands, has sent me many of his outstanding images of space vehicles in the past. But he just sent one to me that I have to admit, rather shocked me: an image of a Keyhole 11 spy satellite! 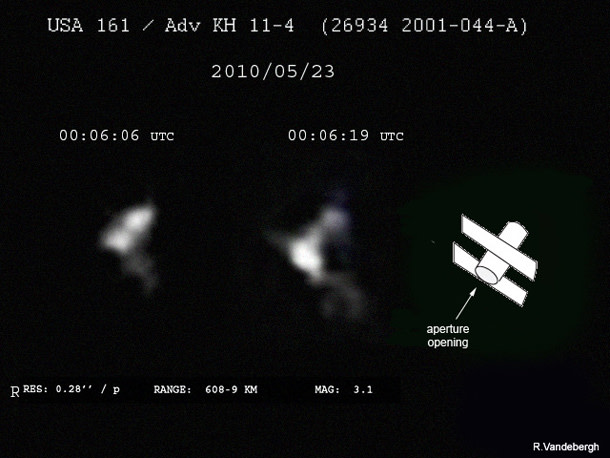 At the time Ralf took these images, the satellite was about 600 km (360 miles) away, a considerable distance for a small object. Mind you, this satellite is about 5 meters (16 feet) long, so the fact that any detail is seen at all is amazing. It would appear to be less than 2 arcseconds in length at best -- that's the same apparent size as a U.S. quarter seen at a distance of about 3 km (nearly two miles!). For comparison, the Moon is 1800 arcseconds across, or 900 times bigger, so we're talking weensy weensy here. The Keyhole satellites are pretty well-known in space circles, and the KH-11s have been around a while (the next-generation KH-12s have been around a while too, but not much is known about them). The 11s are pretty much like Hubble Space Telescope, but pointed down at us -- well, presumably not us, but as opposed to pointed out toward the heavens. Given some basic physics, and assuming the same optics as Hubble has, it's easy to calculate that they should be able to spot objects as small as perhaps 10 cm (4 inches) across, though this would require either some very precise tracking or very short exposures to prevent blurring. Or maybe both. It's also possible to improve on that resolution a bit using sophisticated mathematical techniques, too. While little or no orbital data is known for the KH-12s, the orbits of KH-11s (at least, some of them, dun dun dunnnn) are online. Ralf used that data to predict where and when to get these images. In the picture above he compares what he got to a simplified Hubble-like drawing, and with some small amount of imagination you can see the resemblance. I wouldn't put too much stock in the exact configuration, but it does appear he got some detail on the satellite. He also has a neat animation showing the satellite; details are harder to see but he catches some hint of solar panels, as well as catching a flash of sunlight off a reflective surface. Also note he's done all this with a 25 cm (10") telescope. With something bigger, higher resolution is possible. Not so much because the image can be magnified more, but because shorter exposures are possible (bigger 'scopes capture more light from an object), freezing the atmospheric distortion better. I have seen some pretty big 'scopes that are used to track satellites, which makes me wonder how much detail they capture... and who else is out there tracking our satellites as well. Image courtesy Ralf Vandebergh