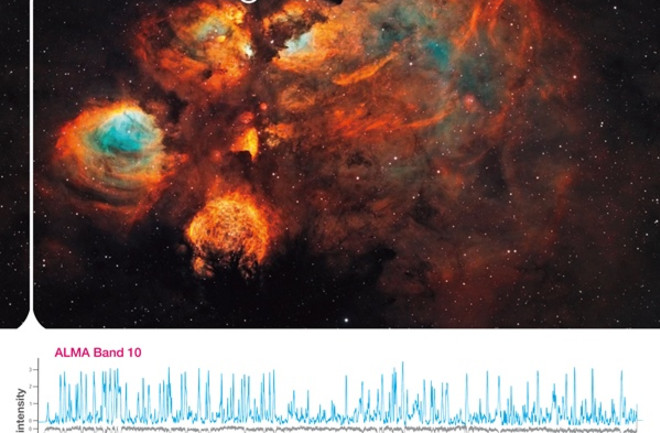 ALMA observed the Cat's Paw Nebula, picking up nearly 700 emission lines from molecules within the region (blue). This result shows more than 10 times the emission lines picked up by the Herschel Space Observatory (gray, inverted to better compare the two). (Credit: S. Lipinski/NASA & ESA, NAOJ, NRAO/AUI/NSF, B. McGuire et al.) The Atacama Large Millimeter/submillimeter Array in Chile has been up and running since 2011. However, its initial incarnation involved only about one-third of the array’s total planned 66 antennas and only a few of its 10 receivers, each capable of observing a different band of radio wavelengths. Over time, the array has taken strides toward full operation; today, all antennas are functional and ALMA has now added its highest-frequency observing band — Band 10 — to the mix.

On November 22, ALMA released its first scientific results with Band 10, collecting 695 emission lines — the fingerprints of vibrating molecules energized by starlight — from molecules in the Cat’s Paw Nebula. The results were published August 17 in The Astrophysical Journal Letters, and are also available on the arXiv preprint server. These molecules include methanol, ethanol, methylamine (a derivative of ammonia), and glycolaldehyde (a simple sugar-related molecule). The Cat’s Paw is located about 4,300 light-years away, and is currently forming massive stars. Previous observations at this same radio frequency, made by the European Space Agency’s Herschel Space Observatory, detected only 65 emission lines — 10 times fewer than ALMA saw — demonstrating ALMA’s immense observing power, especially in a wavelength region not normally observable from the ground. “[These observations] require the extreme precision and sensitivity of ALMA, along with some of the driest and most stable atmospheric conditions that can be found on Earth,” said lead author Brett McGuire of the National Radio Astronomy Observatory in a press release.

Jets of heavy water (blue) shoot out into an area rich with molecules (orange) around one or more protostars in the Cat's Paw Nebula. (Credit: ALMA (ESO/NAOJ/NRAO): NRAO/AUI/NSF, B. Saxton) In addition to emission from warm molecules, ALMA also saw jets of heavy water — water composed of oxygen and deuterium (an isotope of hydrogen that contains one proton and one neutron in its nucleus) — shooting from at least one of the massive forming protostars in the region. The team believes these jets are relatively young, just beginning to push outward and into the larger nebula around the forming stars.

Band 10 is ALMA’s highest-frequency receiver band, capable of catching signals between 787 and 950 GHz. It was developed by the National Astronomical Observatory of Japan (NAOJ), which also developed ALMA’s Band 4 (125–163 GHz) and Band 8 (385–500 GHz). However, unlike ALMA’s other bands, these particular receivers were more challenging to construct. Because of the wavelengths they observe, the Band 10 receivers could not utilize superconducting components built with Niobium, which is traditionally used in such equipment. Instead, the development team used niobium-titanium nitrides (NbTiN) to create the components in Band 10. The receivers were completed in 2014, and installed in ALMA for use in normal science operations in 2015.

An ALMA Band 5 receiver in the lab at the ALMA Operations Support Facility in the Atacama Desert of Chile. (Credit: Alison Klesman) As highlighted by ALMA’s recent results, Band 10 is sensitive to complex molecules at warm temperatures, as well as emission from heavy water. These molecules lend insight into star and planet formation, allowing astronomers to glimpse the ingredients that go into planetary systems based on the molecules present in the nebulae that surround young stars. Band 10 also allows astronomers to peer at objects much closer to home: the upper atmospheres of the giant planets in our own solar system. Getting a better handle on the molecules swirling above the clouds will help us better understand weather patterns at different levels within the planets’ atmospheres.