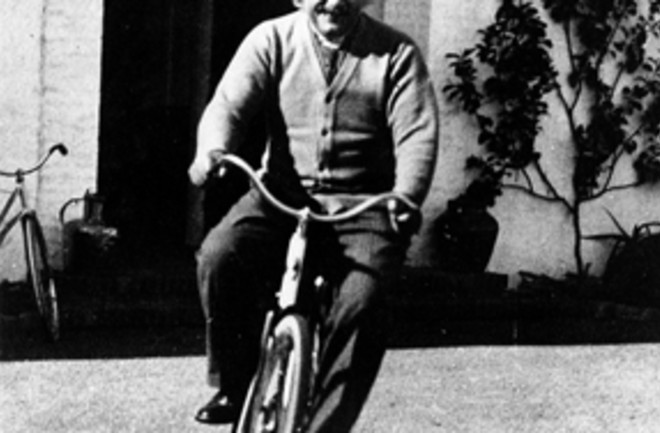 Bob Dylan came up with one way to remember Albert Einstein: “Now you would not think to look at him/But he was famous long ago/For playing the electric violin/On Desolation Row.”

This is the pure distillate of celebrity. Dylan’s folk-rock vision of “Einstein, disguised as Robin Hood” is one in which the original man has disappeared into a symbolic fog where more or less any meaning may be found. Nowadays, such content-less fame has become common, though there aren’t many out there who match Einstein for resonance. But when he first exploded into public view, there were no precedents. No scientist before or since has so completely transcended the role of expert to become a universal emblem of reason.

It is possible to fix almost to the day the moment when Einstein became an icon. On November 6, 1919, he was still a private person. But that night, the Royal Society held a special meeting in London to announce the results of observations that seemed to confirm Einstein’s theory of gravity, the general theory of relativity. As The Times of London reported in a headline the next day, the society concluded that the work amounted to a “Revolution in Science—New Theory of the Universe—Newton’s Ideas Overthrown.” Three days later, The New York Times picked the story up, blaring that there were “Lights All Askew in the Heavens…[the] stars [were] not where they seemed or were calculated to be.” From there the word spread around the globe until, by the turn of the year, Albert Einstein had crossed the point of no return: He was and has remained public property. But that raises questions: Why him, why then, why still?

Partly it was just that Einstein happened to photograph well. He had always been appealing, even seductive, in the photos from his younger days. By 1919 he had become someone whom the camera loved. Einstein joked about it, describing himself for his young cousin, Elizabeth Ney, as a fellow with a “pale face, long hair, and a tiny start of a paunch. In addition an awkward gait, and a cigar in the mouth....But crooked legs and warts he does not have and so is quite handsome....”

Photographers caught that wit as well as the gravitas. It helped that he was astonishingly willing to play along. No one made him ride that bicycle or stick out his tongue straight into the barrel of an oncoming lens. Whatever weariness he felt at the crush of the public gaze, he was almost always willing to pause for the shot. There is a story that he was once asked—by perhaps the only person on earth who did not recognize him—what he did for a living. He replied that he was a photographer’s model.

He was just as open to sharing his ideas. Einstein took seriously questions about his science, up to the point of writing one of the best introductions to relativity for the lay reader. (Called Relativity, it’s still in print.) He handled the ridiculous questions, too, with humor and enormous stamina. He told his interrogators what he thought of Prohibition (against, though he didn’t drink), the death penalty (against, at least some of the time), and abortion (for, up to a certain point in the pregnancy). No scientist before Einstein had been so willing to stand before his public.

None of this would have turned him into a universal figure, however, without the means to carry his words and image to a global audience. By 1919, undersea cables could transmit Einstein’s doings, no matter how trivial, around the world. In 1927, The New York Times judged newsworthy the fact that Einstein had lost his luggage on the train from Paris to Berlin. By 1930 radio broadcasts could carry his voice to millions of strangers. Above all, the immediate postwar period was when film inherited the earth. Newsreels showed what Einstein looked like, how he moved, the angle of his grin. It is no coincidence that he achieved fame greater than that of any previous discoverer at just the time that the first true Hollywood stars (Charlie Chaplin, for example, or Mary Pickford) became legends.

Even so, why such lasting appeal? The answer lies with the historical events preceding his first contact with the public. Einstein completed the general theory of relativity in November 1915 in Berlin, the capital of a nation absorbed in the most destructive war Europe had ever known. How dreadful was that conflict? Here is a telling anecdote: The painter George Grosz, an acquaintance of Einstein’s, was recovering from wounds in Berlin. Told he had to go back to his unit, he tried to drown himself in a latrine: Better dead in a pool of feces than back to the trenches. Worse still, science itself was implicated in the disaster. After Einstein’s friend Fritz Haber pioneered the use of chlorine gas as a weapon, Einstein lamented that “our whole, highly praised technological progress, and civilization in general, can be likened to an ax in the hand of a pathological criminal.”

And then in 1919 came news of Albert Einstein’s wondrous ideas—ideas that were strange, difficult, true, and completely innocent of the disas­trous war just past. He had found this truth with only the power of his mind. His theory was woven from numinous words of wisdom: warped space, the fourth dimension, bending time. Here was an alternative to the memory of the killing grounds of the western front.

Fast-forward to Dylan’s electric violinist, and then again to image after image poured into the media stream to this day. A few other scientists—Stephen Hawking, for one—have a similar aura. But Hawking and the others must fight through the relentless noise of the modern publicity machine. Even more, Hawking’s story is personal, the battle of one man against a terrible illness.

Einstein always represented something more—an aspiration that extended far beyond himself. At the core of the Einstein phenomenon lies his connection to a time when the whole idea of human reason seemed a grim joke in the wake of the so-called Great War. The hold he still has on popular imagination derives from that moment when Albert Einstein—the patron saint of reason, all-knowing, unknowable—smoothed balm on the terrible wounds of the 20th century.