Cremation diamonds: Here's how science can give you an afterlife in the form of shiny compressed carbon. 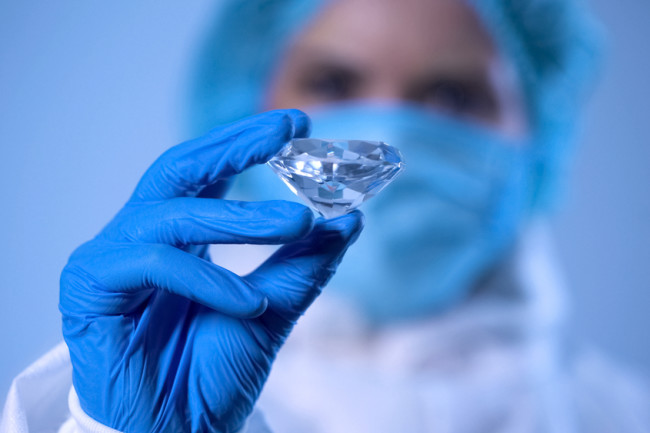 Ashes to ashes, dust to diamonds. That’s the afterlife some companies are offering grieving families — a chance to remember the twinkle in a lost loved one’s eye by gazing into the glint of a gemstone grown from their cremated remains.

That’s right. Science can’t yet help you live forever. But it can turn you into a diamond, which — if you listen to the jewelry industry — is basically the same thing. After a year of the entire world watching scientists race against the devastating death toll of COVID-19, we can now thank technology for vaccines for the living and the option to commemorate those we’ve lost in ever-expanding ways.

Natural diamonds take about a month to form under extreme pressure and temperature in the mantle layer of the Earth’s core, about 150 miles underground. Over millions of years, the gems are then pushed by volcanic activity to the surface, where they are mined and coveted by humans as symbols of eternal love. In 1954, General Electric became the first company to successfully replicate those high temperature and pressure conditions to create diamonds from elemental carbon in a laboratory. These man-made stones first became commercially available in the 1980s.

More recently, some companies have begun incorporating carbon from cremated ashes into this process, offering family members the chance to keep a piece of their lost loved one close by, forever. Just picture it: instead of proposing to your sweetheart with your grandmother’s heirloom ring, you could cut straight to the source and propose to them with grandma.

A human body is almost entirely composed of four elements: oxygen, hydrogen, nitrogen and carbon. With three of those being gaseous, cremated remains contain a hefty carbon content that can be purified down to this single elemental building block of society’s most storied stone. The carbon is then pressed between two plates at high temperatures in a lab, where it crystalizes around a diamond fragment, much like an oyster generating layers of pearl around a grain of sand.

Eterneva, based in Austin, Texas, is one of several companies offering families the chance to design a custom gem memorial, down to the size, shape and even the color of the stone. A yellow diamond is produced with the addition of a bit of nitrogen, while a colorless rock requires that the lab make sure no nitrogen from the air infiltrates the diamond incubator. A blue gemstone can be lab-generated by incorporating boron into the recipe. And red, green and black hues are achieved through an irradiation process that alters the way the finished stone reflects light. Three weeks of irradiation produces a reddish diamond while a black diamond requires about two months.

Adelle Archer, co-founder and CEO of Eterneva, says she has seen the action of designing and monitoring the creation of a commissioned diamond help family members through the grieving process. They allow customers to virtually track each growth step and will even hand-deliver the final product if its destination is nearby.

“We just obsess over the experience,” Archer says. “This is not just a memorialization process. This is something that will help you heal.”

This claim sparked the interest of leading grief theorist Candi Cann at Baylor University in nearby Waco, Texas. Cann is currently mining the experiences of Eterneva customers for empirical evidence of these healing benefits. The ongoing study will help researchers understand how creating and wearing a diamond from a relative’s ashes influences emotional acceptance of that loss.

In the meantime, anecdotes of grief therapy through jewelry abound. Archer says Eterneva makes most of their diamonds for people experiencing the pain of losing a loved one far too soon, creating solace stones from the ashes of sons, daughters, husbands and wives. One woman who lost her father shortly before he was supposed to walk her down the aisle had diamonds made from his ashes set into her wedding band so that he could still be with her on her special day. Others find that the ease of transporting or inheriting a diamond compared to an urn makes it possible to maintain that connection.

“For a parent, it means the world to them that they have a conversation piece to talk about and share their child,” says Archer.

For skeptics, though, it all comes down to the composition of the stone. Death diamonds have generated pushback from some traditional jewelers who claim that the process is a scam since the final gemstone is typically only made up of about 10% of carbon from the cremated ashes. The other 90% is generic stock carbon added into the mix to streamline the process and ensure lower rates of contamination by other minerals.

Barbara McAlister, a graduate student in dance at Texas Women’s University, was one who immediately warmed to the idea of growing a diamond as a future way to honor her partner.

“When I first heard about this, I loved that idea of something beautiful coming out of something tragic,” McAlister says.

But upon learning that the diamond would only contain 10 percent of her partner’s remains, she immediately reconsidered, even though she recognized she does feel attachment to items, like a favorite shirt, that represent her partner without containing parts of him.

“I think in my mind it was a minimum 50 percent of the person,” McAlister says. “I would be willing to pay for that. It does feel different that it’s such a small percentage.”

Because they supplement with generic lab carbon, it takes just half a cup of cremated ashes for Eterneva to produce up to eight different diamonds, with prices starting at about $3,000. Other companies offering similar options include Atlanta-based Saint Diamonds and the Swiss company Lonite.

Some companies can also source the 10 percent of personal carbon from a handful of hair. According to Tim Cupery, a professor of sociology at Fresno State University and an expert in religious studies, this option may appeal to members of the world’s major monotheistic religions, which have historically forbid cremation. The Catholic Church, for example, excommunicated members for being cremated until 1963.

Personally, Cupery says, he would probably not choose to pay to turn a loved one into a diamond, because he doesn’t tend to form attachments to objects. His wife recently misplaced her engagement ring, which he had inherited from his great-grandmother.

“It didn’t really bother me,” Cupery says. “It’s a symbol of a real thing, but the real thing is gone.”

For conscientious customers, death care decisions may be influenced more by pandemic circumstances or sustainability values than by how much of the diamond is made from their loved one’s remains. The popularity of eco-death options like green burials, which avoid the use of caskets and embalming chemicals, are on the rise as people increasingly seek to minimize the carbon footprint of their death.

Tessie Offner, an ecologist living in Florida, recently had to make unexpected funeral arrangements for her father. Because of conditions during the pandemic, cremation ended up being the best option for her family. Offner appreciated that, though the cremation decision felt rushed, the option of later turning those ashes into a diamond didn’t have to be.

“I think the hardest thing, when it’s not something you’ve prepared for, is needing to make a decision quickly and feeling pressured to do something now even though it might not be what you wanted to do ultimately,” Offner says. “With this option, you could hang on to the cremains until you are able to save enough money for a diamond. There’s no pressure.”

Offner also valued the portability and durability of a diamond compared to an urn, and the seemingly lower impact on the Earth compared to embalming and burial. According to Archer, growing a diamond uses about the same amount of energy as a household air conditioner unit. But it does still require cremation, which typically involves both energy expenditure and the emission of air pollutants.

Although the calculation of the carbon footprint of compressed carbon commemoration is pending, it seems that glittering and eternal diamonds have now infiltrated the industry of darkness and finality. At a time of exceptional grieving due to COVID-related loss of life, science offers a way to share the sparkle of loved ones lost too soon.