After Pluto: New Horizons’ Next Target is a Relict of Creation 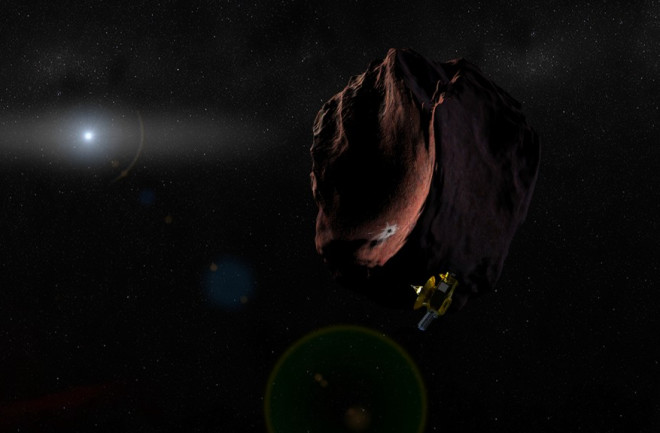 An artist's impression of NASA's New Horizons spacecraft flying past its next target. (Credit: NASA/Johns Hopkins University Applied Physics Laboratory/Southwest Research Institute/Steve Gribben) Far, far past Pluto, the most distant object humanity has ever visited, there’s a tiny world fainter than any seen in that part of our solar system. Its dark orbit reaches a billion miles beyond the former ninth planet. But 2014 MU69, as it’s labeled by astronomers, is just a few dozen miles across — too scant to be spherical. There’s nothing particularly special about it. Thousands of similarly mysterious and icy worlds lurk in these celestial suburbs. Yet it’s precisely its banality that makes this little prince of a planet so special — 2014 MU69 is made of the very stuff of creation. And on Jan. 1, 2019, an army of astronomers will turn their gaze to this world for a few hours, as NASA’s New Horizons spacecraft blazes by at some 8 miles per second. At the American Astronomical Society’s Division for Planetary Sciences meeting in Pasadena, California, this week, astronomers discussed how the spacecraft’s next target is coming into focus. A team has been using the Hubble Space Telescope, which also first detected 2014 MU69 during a hunt for additional New Horizons targets, to learn more about the distant world. “We’re going to fly past something in the solar system that is about as old as we possibly can,” says Planetary Science Institute astronomer Susan Benecchi. “And that’s exciting because it’s information we couldn’t glean otherwise.”

The scientists believe 2014 MU69 is what’s called a cold, classical Kuiper Belt Object. The Kuiper Belt is a disk-shaped region of icy objects past Neptune. But Pluto isn’t part of that classical population. The distant dwarf planet crosses Neptune’s orbit, and that proximity lead it to collide with other objects — large and small — over the eons as giant gaseous worlds shuffled about our outer solar system, flinging off space rocks. So, much of Pluto’s ancient history was erased in encounters with other worlds. And similarly, comets and asteroids, which are also excellent time capsules, have interacted with other objects and been bombarded by solar radiation.

Path of NASA's New Horizons spacecraft toward its next potential target. (Credit: NASA/Johns Hopkins University Applied Physics Laboratory/Southwest Research Institute/Alex Parker) But cold, classical objects like 2014 MU69 orbit further out. They are pristine, primordial remnants from the days our system began to coalesce out of the solar nebula. Primordial means that 2014 MU69 could have existed before there were dinosaurs, or trees, or eyes to see them, and before there was even a fully formed Earth or a sun to cast a dim light on its distant surface. “This population of objects has not been perturbed for a long time,” says Benecchi. “We’re looking at a really old part of the solar system, and we’re learning something about what happened a long time ago.” Hubble observations have helped them gain confidence that 2014 MU69 is part of that cold classical population because its surface is red. And Hubble’s catalog of thousands of other known such objects shows that the tiny object’s reddish hue is an excellent match. Its surface is redder than Pluto, but not quite so red as Mars. “The data confirms that on New Year’s Day 2019, New Horizons will be looking at one of the ancient building blocks of the planets,” says Amanda Zangari, a researcher on the New Horizons team.

That red surface color on Pluto and other redder, more primordial objects, comes from complex organic molecules that Carl Sagan called tholins. “When you see something red in the outer solar system, generally that’s an indication the object is covered in complex organic molecules,” Northern Arizona University astronomer Stephen Tegler told me when I toured the Astrophysical Ice Laboratory before the New Horizons flyby. The lab simulated Pluto’s ice on thin films so that astronomers would better understand what they were looking at. When sunlight reaches Pluto’s surface, blue light is absorbed, showing our eyes red. “One of the things that can absorb really efficiently in blue are complex organic molecules,” Tegler says. “An easy way to generate them would be to take something like methane and hit it with particles or UV light; you can break it up and form more complex molecules.” And while Pluto was known to have a red tint before New Horizons flew by, it wasn’t really considered red like many of its neighbors. So, 2014 MU69 might have a truly surprising appearance once we finally see it. “This primordial population that is going to give us the largest lever arm for understanding the physical properties of the early solar nebula,” Benecchi says.