After 4 Billion Mile Trip, Just a Half Marathon to go for Philae as it Tries to Make First Ever Soft Landing on a Comet 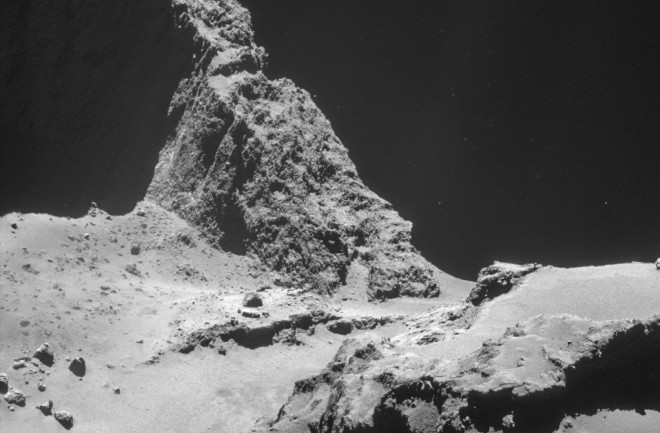 The rugged surface of Comet 67P/Churyumov–Gerasimenko, as seen by the orbiting Rosetta spacecraft. (Source: European Space Agency - ESA) At 9:03 GMT tomorrow, or 4:03 a.m. Eastern time in the United States, the final stage in an historic 10-year adventure is set to begin: The Rosetta spacecraft will attempt to drop a refrigerator-sized lander onto the rough and rocky surface of a comet. For the Philae lander, which has been safely secured to Rosetta during the long trip to Comet 67P/Churyumov–Gerasimenko, that last leg of the journey will be only 13.67 miles. That's a little more than a half marathon — after a 4 billion mile trip. If Philae is successful, it will be the first ever soft-landing on a comet. There is much that can go wrong. As Alan Stern of the Southwest Research Institute put in a story in the Boulder Daily Camera, "I think the challenges are so great, and the attempt so heroic, that it's more or less a 50-50 shot." Stern should know: He's a principal investigator for a mapping instrument on Rosetta. http://youtu.be/u6UNbqq7hEY Rosetta, a mission of the European Space Agency, left Earth in 2004 and arrived this past Aug. 6th. Scientists were surprised at what they found as the spacecraft made its rendezvous with the comet. They expected it to be more or less round — something like a potato. Instead, Comet 67P has two lobes, which look like they may have been squished together in collision long ago. And as the closeup photo from Rosetta at the top of this post shows, its surface is with pitted craters, peppered with boulders, and roughened by cliffs and crags. (For scale, each side of the image represents roughly a half mile in distance on the comet.) Much could go wrong. The lander could bounce off the low-gravity surface of the comet, or land in the wrong spot and tumble, or wind up in the shade, which would mean it could not use solar energy to recharge its batteries. Or —let's hope — everything will go well. Philae will stick the landing (with the help of harpoons it will deploy to grab hold of the surface) and begin transmitting data that can provide scientists with clues to the origin of our 4.6 billion year-old solar system. Philae is supposed to touch down about seven hours after its release from Rosetta. It will then take about a half hour for a signal to reach Earth indicating success or failure — that would be at about 11:30 a.m. EST in the U.S. This will be exciting.