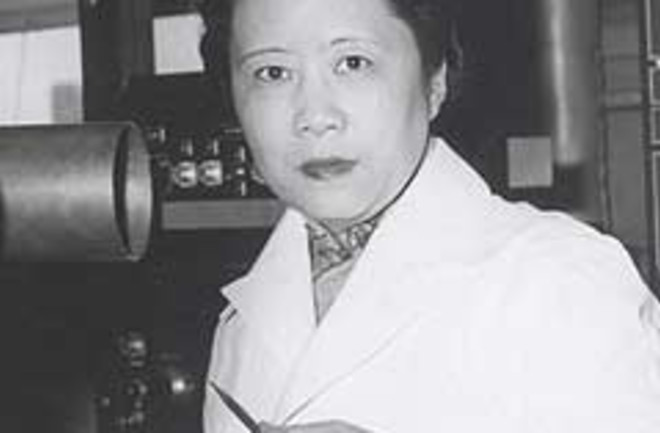 March 24 was designated Ada Lovelace Day. To honor the world's first computer programmer, bloggers posted something about a woman who made a significant contribution to science or technology. Serious bloggers wrote detailed and engaging pieces, but we overdue authors don't have time for that. So instead, only one day late, here's a short excerpt from my book draft, about Chien-Shiung Wu and the discovery of parity violation. ----------------------------------------------------------------------------------- It came as quite a surprise in the 1950’s when parity was shown not to be a symmetry of nature, largely through the efforts of three Chinese-born American physicists: Tsung-Dao Lee, Chen-Ning Yang, and Chien-Shiung Wu. The idea of parity violation had been floating around for a while, suggested by various people but never really taken seriously. In physics, credit traditionally accrues not just to someone who makes an offhand suggestion, but to someone who takes that suggestion seriously enough to put in the work and turn it into a respectable theory or a decisive experiment. In the case of parity violation, it was Lee and Yang who sat down and performed a careful analysis of the problem. They discovered that there was ample experimental evidence that electromagnetism and the strong nuclear force both were invariant under P, but that the question was open as far as the weak nuclear force was concerned. Lee and Yang also suggested a number of ways that one could search for parity violation in the weak interactions. They finally convinced Wu, who was an experimentalist specializing in the weak interactions and Lee’s colleague at Columbia, that this was a project worth tackling. She recruited physicists at the National Bureau of Standards to join her in performing an experiment on Cobalt-60 atoms in magnetic fields at very low temperatures. As they designed the experiment, Wu became convinced of the project’s fundamental importance. In a later recollection, she explained vividly what it is like to be caught up in the excitement of a crucial moment in science:

Following Professor Lee's visit, I began to think things through. This was a golden opportunity for a beta-decay physicist to perform a crucial test, and how could I let it pass? --- That Spring, my husband, Chia-Liu Yuan, and I had planned to attend a conference in Geneva and then proceed to the Far East. Both of us had left China in 1936, exactly twenty years earlier. Our passages were booked on the Queen Elizabeth before I suddenly realized that I had to do the experiment immediately, before the rest of the Physics Community recognized the importance of this experiment and did it first. So I asked Chia-Liu to let me stay and go without me. As soon as the Spring semester ended in the last part of May, I started work in earnest in preparing for the experiment. In the middle of September, I finally went to Washington, D. C. for my first meeting with Dr. Ambler. ... Between experimental runs in Washington, I had to dash back to Columbia for teaching and other research activities. On Christmas eve, I returned to New York on the last train; the airport was closed because of heavy snow. There I told Professor Lee that the observed asymmetry was reproducible and huge. The asymmetry parameter was nearly -1. Professor Lee said that this was very good. This result is just what one should expect for a two- component theory of the neutrino.

Your spouse and a return to your childhood home will have to learn to wait – Science is calling! Lee and Yang were awarded the Nobel Prize in Physics in 1957; Wu should have been included among the winners, but she wasn’t.