About That 'Promising' SETI Signal... 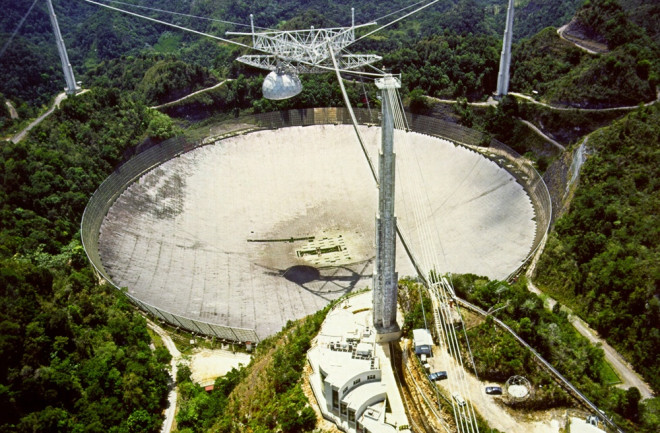 (Credit: H. Schweiker/WIYN and NOAO/AURA/NSF) It's easy for the public to get excited about the thinnest hints of anything alien. After all, there are dozens of "Earth-like" planets (which aren't confirmed to be anything like us) and there's that "alien megastructure" star (which is probably comets or a very strange variable star.) So when news hit this week of a potential alien signal, it hit hard, spreading across the media — including here, because who can resist a good alien story? To recap: a strong signal in the 11 Ghz band was detected by the RATAN-500 radio telescope in Russia some time ago. The signal was at an unusually high frequency and strength. Russian SETI researchers flagged it for follow-up. Then the science-meets-futurism blog Centauri Dreams picked it up. Then everyone did. We even cautiously dipped our toes in it, awaiting word from SETI researchers to sort it out. We got that word. For fans of an alien signal around the star HD 164595, it's not looking pretty. "All we know about the HD 164595 is the power and fit to the beam profile," Eric Korpela, a SETI@Home project scientist, says in an email. "If we only look at those two quantities we have 450,000 events in the last 17 years of similar quality. That's about 72 per day. Because we have all the other information about the signal, most events that strong are identifiable as interference." That's bound to burst a few bubbles. After all, we've been searching for alien transmissions since at least 1958, when Frank Drake launched Project Ozma. But in between now and then, we've never made contact with an alien civilization. How do we know the government isn't covering up a contact scenario? Well, this week's news is a case in point. But Seth Shostak, the senior astronomer at the SETI Institute, points out that it's happened before, including when the SETI Institute had a promising signal in 1997 that turned out to be a very terrestrial airplane radar. As with a few other such examples, reporters were calling within the hour, as word spread quickly. "It'll be in the media right away, even though you didn't (double) check it out," Shostak says. Shostak's signal was repeating — albeit because it was bouncing off the radio telescope just the right way. That's a critical component to determining if a signal is a one-off event or something more. The RATAN-500 astronomers listened for repeating signals, and 38 subsequent follow-ups found nothing, as did SETI Institute and Breakthrough Listen Initiative follow-ups "We didn't find anything," Shostak says. "Nor did they" That leaves a single detection, which doesn't meet the criteria for a full-on signal. But it also seems that the excitement was much in the eyes of the public. "I don't even think (RATAN-500 scientists) were terribly excited about it themselves," Shostak says. So how did this get out of hand? "The initial reports came from a trusted source, and contained words like 'detection' and 'signal'. That's bound to garner attention," Korpela says. "There's always the problem that scientific vocabulary is different from the public vocabulary. 'Detection' to me means something was detected, to the public it may translate as 'we found aliens'." Korpela made it quite explicit what he thought yesterday: that the signal was nothing special, that by this metric there were thousands of "detections," none more worthy of follow-up than any others. Korpela addresses a laundry list of possible suspects: active galactic nuclei (which past the quasar stage don't give out repeated signals quite as often from non-alien sources), stellar flares, violent stars. Both Korpela and Shostak mention the possibility of a microlensing event. Large objects like stars make an indentation on the fabric of space-time. As a result, there's a curvature from the stars that becomes more pronounced when an object passes behind it. In these cases, the gravity of the stars bends the light and makes it seem closer than it actually is. Since light is photons as are radio waves (indeed, visible light is just one small part of how light behaves in the universe), it would bend microwaves as well. A distant object's signal might be amplified by the process and arrive seemingly from nowhere. And then curious scientists and incautious language lead to the word "alien" coming up. "The amateurs are very keen on anything related to aliens," Shostak says. Shostak maintains, though, that even loose threads like this signal are worth pursuing. "You've seen so many false alarms that you think 'it's probably a false alarm,' but with that kind of attitude you'll never find anything," he says. Let's say there IS a promising signal, though. I asked Korpela what criteria SETI@home would place on it, and how the HD 164595 signal fails that test. He writes:

The first criterion is not looking like a natural signal. That means it needs either too narrow a bandwidth to be natural, or it need evidence of encoding: pulsation, frequency shifts, multiple frequency components, or waveform repetition. Because the HD 164595 event was detected using a broad-band, total power measurement, we can't tell if it has any of those characteristics. The second criterion is persistence. We require that a signal of very similar characteristics be seen at the same spot in the sky multiple times before considering it to be real. The HD 164595 is not persistent, thus far. The third criterion is localization. We require that a signal not come from multiple places in the sky. If it does it's likely to be local or satellite interference. Again, because of the lack of frequency information we can't tell if the HD 164595 signal was similar to any of the interference seen by the telescope.

So it's not aliens this time. At least barring a groundbreaking discovery of a repeat signal, with the beacon just taking a few months off to relax a little. This is just the latest in a series of SETI cautionary tales, something stretching back the entire history of SETI, and something Korpela is very familiar with. "We really haven't had (a signal) we've gotten terribly excited about," he says. "The most well known was the candidate SHGb02+14a, which was re-observed in our first candidate observing run. It created a similar flap to this one, in part because I was misquoted." So what happened to that signal? It was just a series of coincidences. "The target was observed by SETI@home twice and there was a weak signal matching the beam profile found at the same frequency in both observations, We observed it a third time and found at the same again frequency again, but that signal had a high Doppler drift which indicated that it couldn't be the same signal, but was just a chance coincidence," he says. "It was reported by the media as 'a baffling alien signal' even though it was nothing. No subsequent observations of that point has showed anything of interest." Sounds like there's another "baffling alien signal" scenario at work this time. But it's not like anyone working at the handful of SETI programs worldwide are giving up. If the time comes where there is a promising signal, Shostak says the SETI Institute would try everything to reduce other options, including pivoting the telescope to see if the signal moves along with it (which would suggest something either human or natural.) From there, they might get cautiously excited and reach out to another observatory. The reporters would probably be calling at this time, but that's not a bad thing. After all, it could mean a worldwide concerted effort to prove we're not alone. "You'd get everyone in the world to aim their instrument, no matter what instrument they have, at the direction that the signal's coming from," he says. And then we should definitely get more excited than over a tiny microwave blip.