A Yardstick for the Universe

The Hubble Space Telescope is helping to improve our understanding of the expansion of space, dark energy, and the fate of the cosmos. 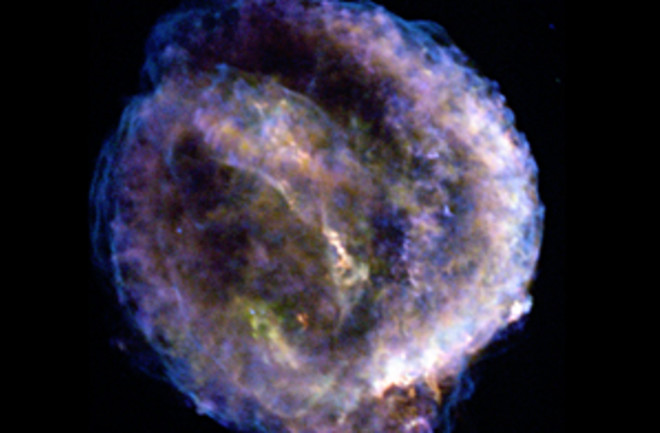 A decade ago scientists discovered that the expansion of the universe is accelerating, not slowing down as they had long assumed. Understanding why, and determining the ultimate fate of the cosmos, depends on making more accurate measurements of distance across vast expanses of space. Drawing on new observations, astronomers have just formulated the best estimate to date of exactly how quickly the universe is growing.

To decipher the large-scale behavior of the cosmos, scientists need to determine the rate at which galaxies at various distances are moving away from us. They deduce recession speeds from the stretching and reddening of the galaxies’ light, and measure distances by studying stars of known brightness—notably stellar explosions called Type 1a supernovas and pulsating stars known as Cepheid variables. With the Hubble Space Telescope, astronomer Adam Riess of Johns Hopkins University calculated that for every increase in distance of 3.2 million light-years, objects are receding at an additional 166,000 miles per hour. Riess’s result has a mere 4.8 percent margin of error, compared with the huge twofold uncertainty in estimates made two decades ago.

Scientists theorize that an unobservable entity called dark energy is pushing galaxies apart and driving the quickening expansion. Now they are trying to grasp what exactly dark energy is and how it has changed with time. The answers may tell us whether the universe will expand forever or will eventually contract in a “big crunch.” To find out, though, researchers will have to get that pesky margin of error in Riess’s result down even further.

A special type of star may help achieve the needed precision. Most known Cepheid variables are visible only to about 100 million light-years away, but researchers at Ohio State University recently discovered how to measure distances using an especially bright class of Cepheid that can be seen at more than three times that distance. In addition, upgraded instruments installed on Hubble during May’s servicing mission could triple the discovery rate of supernovas. “The noose is getting tightened around dark energy,” Riess says.