A galactic "groove" prompts astronomers to recalculate the width of the Milky Way. 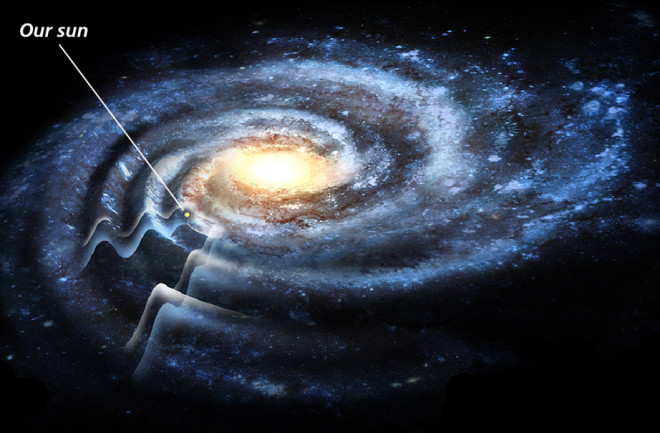 Two rings of stars once thought outside our galaxy might actually be part of it and would extend the disk 50 percent farther from its edge. | Dana Berry/Rensselaer Polytechnic Institute

The starry disk that is our galaxy may extend at least 50 percent farther from its apparent edge than we thought. Instead of being flat, the Milky Way appears grooved like a vinyl record, upping its width to at least 150,000 light-years, researchers now say.

In 2002 and 2004, astronomers found two rings of stars, Monoceros and Triangulum Andromeda, beyond the disk’s known edge. But this new study, published in The Astrophysical Journal in March, suggests that what looked like the disk’s edge is just a deep groove, and the two apparent stellar rings are actually part of the disk.

Study co-author Heidi Jo Newberg of Rensselaer Polytechnic Institute in Troy, N.Y., and colleagues believe the grooves might be caused by one or more small galaxies, or galaxy-size nuggets of dark matter, being gravitationally dunked into the Milky Way, like stones thrown into water.

[This article originally appeared in print as "Galactic Gains."]