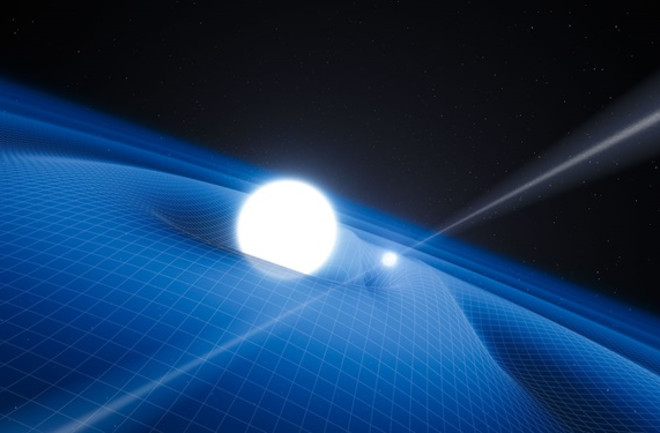 In this artist's concept, a white dwarf (larger object) distorts and drags space-time around it, affecting the orbit of its neutron star companion. (Credit: ESO/L. Calçada)

Einstein’s theory of relativity has many strange consequences. Time moves slower for those traveling at high speeds, and massive objects like the Sun deform the space-time in which they sit, causing light to “bend” around them.

But one of the most curious is a concept called frame-dragging. When a massive object rotates, it will swirl, or drag, space-time around with it like a skirt swirling around a spinning dancer. This effect is small around a body like Earth, but more exaggerated around more massive, fast-spinning objects. Now, astronomers have used the frame-dragging effect to take some real-world measurements previously impossible. They measured the rotation speed of a white dwarf and confirmed previous clues about its unique history. Their work appears Jan. 31 in Science.

This particular white dwarf (the remnant of a sunlike star) is part of a binary system called PSR J1141-6545, which lies in the southern constellation Musca the Fly. It’s an unusual system, with the quickly rotating white dwarf accompanied by a neutron star (a remnant left when a star more than eight times as massive as the sun goes supernova).

Of the pair, the white dwarf formed first and the pulsar later. And between those two events, mass from the star that would eventually explode to create the pulsar flowed onto the white dwarf, causing it to rotate much more quickly than it otherwise could.

How fast is the white dwarf rotating, exactly? That’s been difficult to measure, the researchers say, because the tiny remnant is too faint for astronomers to use their usual method of measuring a star’s rotation. But that information is worth chasing: “Measuring this rotation is an important test of our models of the evolution of binary systems,” said study co-author Thomas Tauris of the Aarhus University in Denmark in a press release.

Fortunately, the white dwarf isn’t the only special object in this system. The neutron star is also a pulsar, which means it’s beaming radiation from its poles into space as it spins. As those beams pass over Earth, scientists detect them with radio telescopes. Based on when each pulse arrives, researchers can determine how fast the pulsar is spinning, as well as how it is moving in space.

And, it turns out, that includes determining how the space-time through which the pulsar is moving is affected as its spinning white dwarf companion creates a swirling eddy of space-time in the wake of its rotation. The team then used the pulsar’s movement through swirling space-time to work backward and determine how fast the white dwarf is spinning.

Scientists measure frame-dragging around Earth by watching how the orbits of satellites around our planet change over time. We can’t send a satellite to orbit the white dwarf, so instead the team calculated how much frame-dragging should have caused the pulsar’s orbit to precess, or change, over the 20 years since the system was discovered. (Precession is a bit like spinning a hula hoop around your arm — the place where the hoop is nearest and farthest from your arm can change, even if the shape and size of the hoop do not.)

Using atomic clocks to precisely time the pulsar’s blips, they determined the pulsar’s orbit has precessed by about 93 miles. From this change, they were finally able to calculate the rotation of the white dwarf: roughly once every 100 seconds.

“Here Albert Einstein gave us a tool, which we can now use to find out more about pulsars and their companions in the future,” said co-author Matthew Bailes of Swinburne University of Technology in Australia.

That speed confirms that the white dwarf pulled mass off its companion star and spun up before the pulsar was created. And that gives researchers even more information about the system and how it formed, also shedding light on other systems like it.