A Turbulent Mind: The Physics of Van Gogh's Starry Night 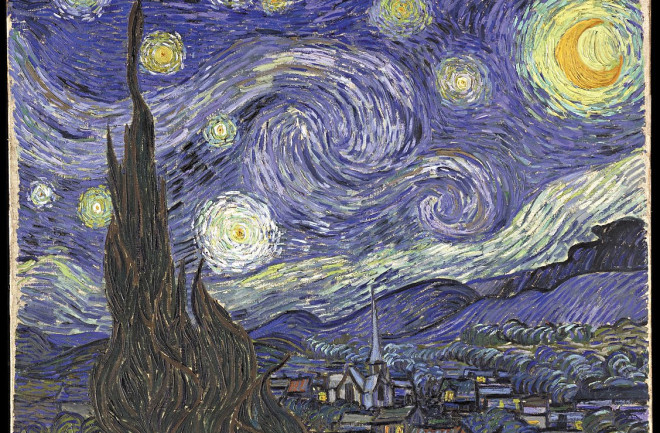 Vincent van Gogh was a brilliant depicter of natural phenomena, especially when he was at his most psychotic. According to José Luis Aragón of the National Autonomous University in Mexico, Van Gogh's famous spiral brushstrokes are near-perfect renderings of turbulence. From the largest visible swaths of paint to the tiniest strokes, Van Gogh's brushwork seems instinctually guided to simulate river eddies and cloud rotations.

Aragón and a colleague, Manuel Torres, plotted the swirls in Van Gogh's most turbulent paintings, which, coincidentally or not, were made during his most serious dips in mental health. Starry Night was painted during the artist's stint in a French insane asylum. Road With Cypress and Star was made after a prolonged bout of disturbing hallucinations, and Wheat Field With Crows was finished just before Van Gogh committed suicide.

Aragón found that Van Gogh's eddies matched the famous Kolmogorov statistical model of turbulence. For a layman like Van Gogh, that's quite a coup, since the problem of turbulence is generally considered the last unsolved mystery of classical physics. Is it possible that Van Gogh's mind, warped by disease, was prepared to grasp phenomena that have baffled physicists for centuries?

This isn't the first time Van Gogh's talent for rendering natural forms has made him a scientific standout. Last year a study found that bumblebees that had never encountered real flowers favored Van Gogh's Sunflowers over the floral works of other well-known artists.