A Third of All Galaxy Clusters Have Gone Unnoticed Until Now 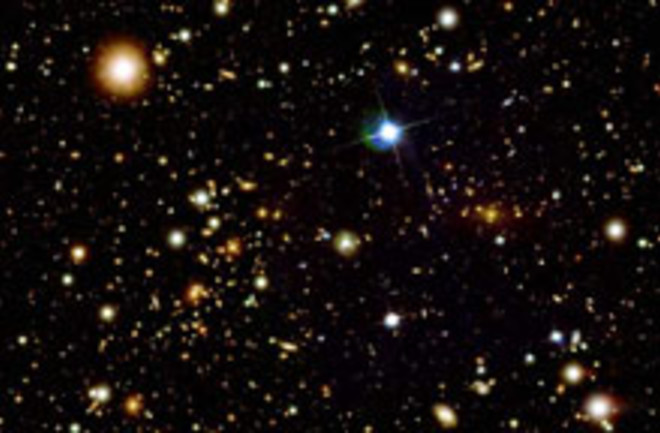 The universe is far from homogenous. Rather, stars, and the galaxies that contain them, clump together in some places, brought together by their shared gravitational attraction. Astronomers have historically found clusters of galaxies in the sky to be relatively easy to spot, as they’re extremely large and bright. But one new study suggests that a third of all galaxy clusters have been hiding undiscovered out in the cosmos.

Scientists estimate that very little of the mass of a galaxy cluster is actually made of galaxies themselves. Much of the mass probably comes from the hot gas that floats between the galaxies, and far more is probably from dark matter. This means that the most obvious feature of a galaxy cluster is actually responsible for very little of its mass. It’s a disparity that has likely hidden an enormous number of less traditional galaxy clusters throughout the universe.

It might seem strange to think that such a large percentage of galaxy clusters have gone unnoticed. But, as study co-author Roger Clowes of the  Jeremiah Horrocks Institute at the University of Central Lancashire, said in an email, “the first clusters to be discovered were visually quite obvious in photographic images of the sky.”

Since galaxy clusters have always been thought of as extremely bright, these traditional clusters have been easy to spot with simple imagery. In this new study, the team tried to avoid the assumption that all or most clusters are this way, Clowes said. “As a result, we find these new clusters, for which less-bright spiral galaxies and irregular galaxies are more prevalent and there is less concentration of galaxies towards the centers of the clusters,” he added.

This research team used public data from 191,440 galaxies. To assist their search, they added another dimension to their analysis: an object’s redshift. That’s a phenomenon in which light is shifted towards the red end of the visible light spectrum as an object moves in the opposite direction as us. This helped them to locate galaxy clusters that aren’t visibly obvious.

In addition to this approach, the team used a specialized computational algorithm designed to pick out clusters of galaxies that avoided traditional methods of picking out galaxy clusters like brightness and looked only at how they were distributed.

The study yielded the incredible result that a third of all galaxy clusters have been hidden until now. This work also revealed some characteristics of these newly-found clusters. “The new clusters are less luminous, “richer” in spiral galaxies and irregular galaxies, and less concentrated towards the centers,” Clowes said, adding that “Of course, we find the conventional clusters. But we find something new too!”

This work was published in the last 2018 issue of the Astrophysical Journal.