A Sweet Smashup: The LHC Shatters the Collison Energy Record 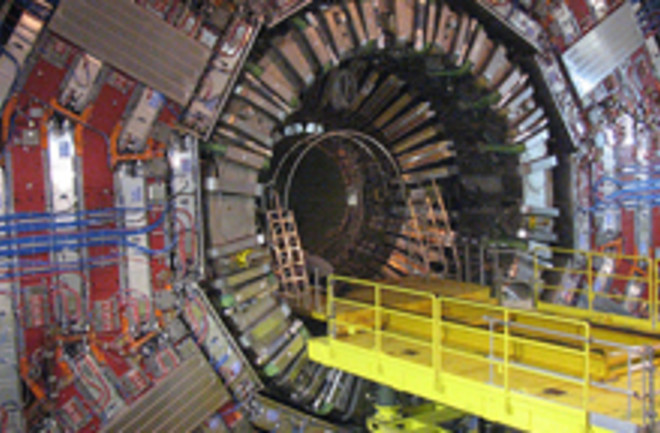 The smashing has started. Now the science can commence. Last week we reported that the Large Hadron Collider's operators at CERN targeted today to attempt the highest energy particle collisions ever. And to show the world that yes, in fact, the LHC can meet a deadline, today they slammed together the two proton beams, each carrying 3.5 trillion electron volts, to produce 7 TeV collisions.

As the first data from the impacts were announced, physicists who had gathered at CERN applauded, jumped up and down, and clutched laptops displaying images of the collisions to their chests as if the computers were newborn babes [National Geographic].

While the physicists enjoy their moment of euphoria, they caution that it will be some time before the LHC's collisions translate into new data that could reveal deeper secrets of the universe.

"Major discoveries will happen only when we are able to collect billions of events and identify among them the very rare events that could present a new state of matter or new particles," said Guido Tonelli, a spokesman for the CMS detector at the LHC. "This is not going to happen tomorrow. It will require months and years of patient work" [BBC News]

. This round of collisions should last a year and a half or so. After a planned shutdown, the physicists plant to crank up the collider to its full power of 14 TeV. For more about the long road to now and the future of LHC physics, follow DISCOVER blog Cosmic Variance. Related Content: Cosmic Variance: LHC Physics Begins! Cosmic Variance: Highest Energy Ever 80beats: Rumors of the LHC’s Demise Have Been Greatly Exaggerated 80beats: LHC Beam Zooms Past 1 Trillion Electron Volts, Sets World Record 80beats: Baguettes and Sabateurs from the Future Defeated: LHC Smashes Particles DISCOVER: A Tumultuous Year at the LHCImage: CERN