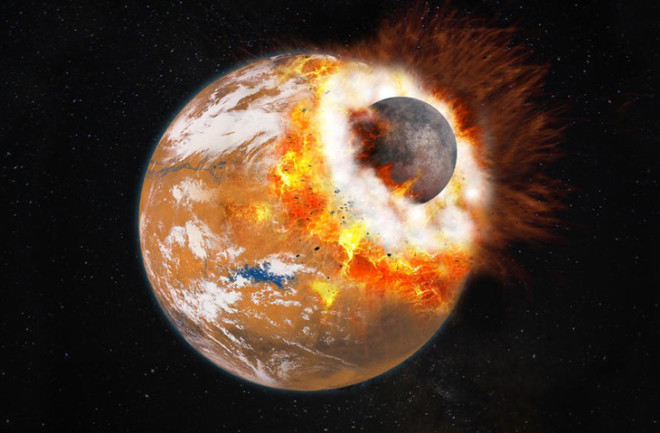 An artist's interpretation of the collision between Mars and a primordial object that could have created Phobos and Deimos, as well as the Borealis basin. (Credit: Université Paris Diderot / Labex UnivEarthS) For years, astronomers have been trying to determine the origin of Mars’ moons Phobos and Deimos. The long-standing argument that they were captured asteroids may fall by the wayside in lieu of a new theory. The biggest factor working against the asteroid theory is that the shape and trajectory of both moons' orbits contradict the asteroid theory, but in two new studies it is shown that they may have been created from a giant collision. Researchers from the National Center for Scientific Research (CNRS) and Aix-Marseille Université determined that the only scenario consistent with their surface properties is that of a huge collision, while Belgian, French, and Japanese researchers in the second study used digital simulations to show this collision.

Put a Ring on It

The second study states that 100 to 800 million years after Mars formed, there was a collision between it and a small planet one-third Mars’ size. The debris from the impact would have generated a wide disk around the planet with dense, molten lava toward the inner part and the gaseous remnants around the outer part. A very large object, about 10 times the size of Phobos, formed from the inner part of the disk, which then acted as a gravitational catalyst for the outer disk to form into much smaller objects. After a few thousand years, approximately 10 smaller moons and one bigger moon surrounded Mars. Once the debris disk disappeared a few million years later, Mars’ tidal effects brought all but two small moons crashing back onto the planet. The two remaining moons are Phobos and Deimos. Phobos itself is still in a downward spiral toward Mars. “We reproduce quite nicely the mass and orbits of Phobos and Deimos. The only problem is that the orbit we find for Phobos may be a little too elliptical compared to current orbits,” says Sébastien Charnoz, a professor at the Université Paris Diderot. As no one digital simulation can model the entire process, three simulations were combined to account for the physics behind the collision: the dynamics of the debris disk, its formation into the satellites, and the satellites' long-term evolution. “The difficulty was to simulate the full process, from the impact, then after the accretion of moons, then the long term dynamical evolution of moons and fall onto Mars,” says Charnoz. “It is why we had to combine three simulations of different types. So this was a numerical challenge.”

In the first study, the asteroid theory was ruled out based solely on the compositional diversity of the asteroid belt. Phobos and Deimos could not have been created from the primordial matter that created Mars (meteorites such as ordinary chondrite), based on the light signatures emitted by both moons. The light signature shows the satellites are made of fine-grained dust. These small grains on the surface of both moons, researchers say, aren't there due to interplanetary dust, so the moons must have been made up of very fine grains since the beginning. Therefore, Phobos and Deimos could have only been created in the outer gaseous section of the debris disk and not the inner portion. Both studies are in agreement on this idea. Both of these studies explain the difference in altitude between the northern and southern hemispheres on Mars as the Borealis basin (which is on the northern hemisphere) is the most likely candidate for the remnants of the impact. “Our next step is to do high resolution simulations of Mars impacts, as the structure of the debris disk formed after the impact is rather uncertain and we had to do some hypotheses on it,” says Charnoz. “Only high resolution simulations ... can solve the problem.” Japan’s space agency (JAXA) will launch a mission in 2022 — the Mars Moons Exploration (MMX) — that will bring back samples from Phobos in 2027. The European Space Agency (ESA) and the Russian space agency (Roscosmos) are working together to launch a similar mission in 2024, Phobos-Soil. These observations could make it possible to determine the age and composition of Mars’ moons and help validate this hypothesis. “In a more distant future, only space missions to Phobos with sample return will definitively decipher their origin,” says Charnoz.