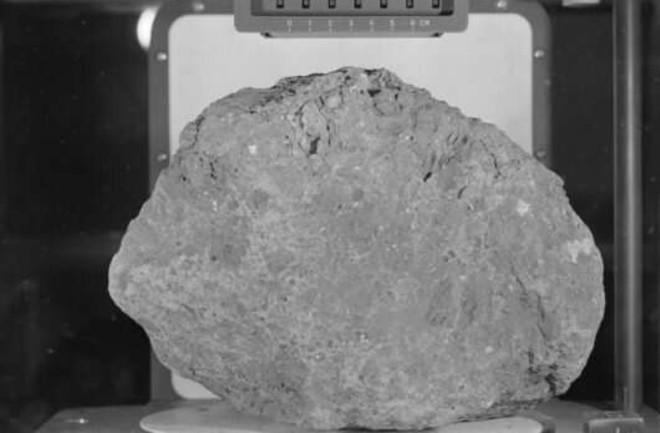 A moon rock sample collected from the lunar surface as part of the Apollo 14 mission. (Credit: NASA)

In 1971, astronauts aboard the Apollo 14 mission collected a moon rock that scientists have now found likely originated on Earth. During a new investigation, researchers found that the rock, officially named 14321, contains traces of minerals and has a chemical makeup that are both common to Earth and extremely strange for the moon. The research team thinks that, most likely, a rock that formed on Earth four billion years ago was launched to the moon’s surface by an asteroid impact.

Astronaut Alan Shepard hoisted the rock from the lunar surface near the edge of Cone Crater, where it had rested for millions of years, and brought it back to Earth for analysis. As the largest of the samples brought back by the mission it was christened with the nickname “Big Bertha”.

NASA loaned the lunar rock sample in question to Curtin University in Australia, where researchers studied the moon rock with help from researchers from the Swedish Museum of Natural History, Australian National University, and the Lunar and Planetary Institute in Houston. According to research author Alexander Nemchin from Curtin’s School of Earth and Planetary Sciences, the 1.8-gram moon rock had minerals similar to a granite. Different types of granite are fairly common on our home planet but extremely rare on the moon. “The sample also contains quartz, which is an even more unusual find on the moon,” Nemchin added in a statement.

To find the sample’s age, the team looked at bits of the mineral zircon embedded in its structure.”By determining the age of zircon found in the sample, we were able to pinpoint the age of the host rock at about four billion years old, making it similar to the oldest rocks on Earth,” Nemchin said, adding that “the chemistry of the zircon in this sample is very different from that of every other zircon grain ever analyzed in lunar samples, and remarkably similar to that of zircons found on Earth.”

In studying the sample closely, Nemchin and the research team concluded that the rock likely formed at a low temperature in the presence of water and oxygen — conditions commonly associated with Earth that would be extremely strange for the moon.

It is possible —though quite unlikely — that this lunar rock originated on the moon. Nemchin posited that perhaps 14321 formed under unusual conditions that appeared only briefly on the lunar surface. “However, a simpler explanation is that this piece was formed on the Earth and brought to the surface of the moon as a meteorite generated by an asteroid hitting Earth about four billion years ago, and throwing material into space and to the moon,” Nemchin said. “Further impacts on the moon at later times would have mixed the Earth rocks with lunar rocks, including at the future Apollo 14 landing site, where it was collected by astronauts and brought back home to the Earth.”

If that hypothesis is right, it means that there are likely little bits of Earth scattered all over the moon.

The findings were published in the journal Earth and Planetary Science Letters.