May is the best time of year to view Saturn — visible with the naked eye, and even better with a telescope. 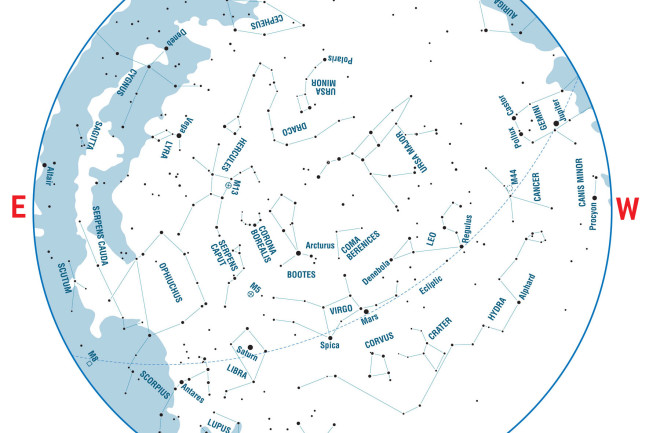 What You Can See: Mercury joins the planetary brigade in mid-May, when the innermost planet hangs some 10 degrees high in the west-southwest 45 minutes after sunset.

Magnitudes: Higher magnitudes (and smaller dots on the page) denote dimmer stars. A 0-magnitude star is exactly 100 times brighter than a 5th-magnitude one.

May’s early evening sky harbors a trio of bright planets. Shortly after night falls, you’ll find Jupiter gleaming low in the west and Mars riding high in the south. Both objects shine noticeably brighter than any star (at least after Sirius sets during twilight).

It takes only a bit more effort to spot Saturn, which stands out this month in part because on May 10 it reaches opposition, the point in its orbit where a planet lies opposite the sun in our sky. This means Saturn rises at sunset and remains visible all night. Opposition also marks the planet’s closest approach to Earth, so it shines brighter (magnitude 0.1) than at any other time of year.

While the naked-eye view impresses, don’t pass on an opportunity to observe Saturn through a telescope. Even from the bright city, a small instrument reveals the planet’s oval disk surrounded by broad and breathtaking rings. Although they may look solid, the rings consist of billions of icy particles ranging in size from a grain of sand to a house. A small scope also will show Titan, Saturn’s largest and most intriguing moon. This world possesses rivers and lakes of liquid methane — though even the best telescopes can’t see them through the moon’s thick, nitrogen-rich atmosphere.