A review of <i>Venom Doc</i>, the adrenaline-packed adventures of one scientist and his almost-fatal obsession with the world's deadliest species 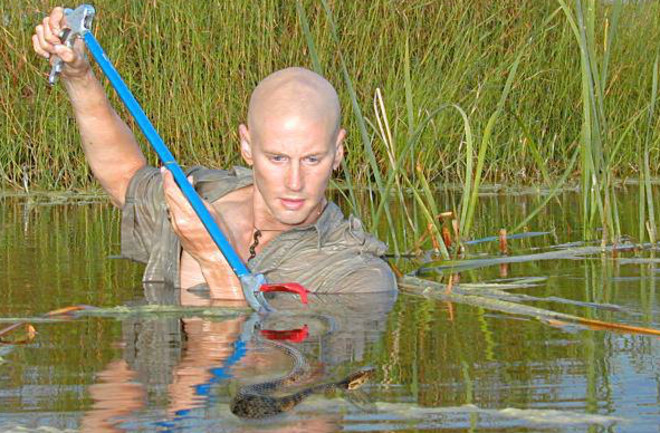 Dr. Bryan Grieg Fry, author of Venom Doc, chasing down a specimen. Photo provided by B.G. Fry Twenty-six snakes. Three sting rays. Two centipedes. One scorpion. Like a twisted version of the Twelve Days of Christmas, Dr. Bryan Grieg Fry goes through and lists the number of each group of venomous animals he's been bitten or stung by. It's November in Brisbane, and we're sitting at a small table in the Red Room, the University of Queensland campus pub, in part so I can ask him a few more questions for an article I'm working on, and in part because I couldn't go to Australia and not catch up with Bryan. I've known him for several years now; when I was in desperate need of stonefish antivenom to complete one chapter of my dissertation, I messaged him on Facebook, and he was nothing but eager to help out. He brought it with him less than a year later, carefully packed in his baggage, as he traveled from Australia to China and finally to Hawaii for the International Society for Toxinology meeting. "I carried this halfway around the world for you," I remember him saying sternly as he handed over the glass vial, the first time I'd ever met him face to face. My heart stopped — had I somehow offended such an influential scientist in my field? — until a half a second later, when his mouth cracked a smile. "What about hymenopterans?" I ask with a grin two and a half years later over a pint, knowing how he'll reply. "Who counts bees? You want me to count every fucking fire ant, too?"

Who says dragons aren't cuddly? Photo provided by B.G. Fry Bryan is one of the world's leading experts on all things venomous. He's an Australian Research Council Future Fellow, an associate professor, and head of the Venom Evolution Laboratory at the University of Queensland. His CV boasts over 140 peer-reviewed papers which have been cited over 3500 times. But Bryan isn't just a scientist; because he's outspoken and outgoing and happily interacts with the media, Bryan has fans and friends well beyond the bounds of academia. He has worked with science media powerhouses like the BBC, National Geographic, and Animal Planet. In his latest, Bryan added a nasty neurotoxic sea urchin to his ever-increasing list of envenomations — just another day in the life of Bryan Grieg Fry. So a year and a half ago, when Bryan first mentioned to me that he was writing a memoir, I knew it would be one hell of a book based solely on what I knew of him already. It was only by reading it that I realized how little I knew of a man who already seemed larger than life. Venom Doc is darker, grittier, funnier, and more enthralling than I could have imagined. It's not a book for the faint of heart. As Bryan described it to me when he had only just begun writing it, "it is Attenborough on acid."

A young Bryan with his favorite toys. Photos provided by B.G. Fry As a military brat, Bryan moved around a lot, yet no matter where he was, he would find his way to the nearest natural area to hunt for the least-loved animals on Earth (often to the dismay of adults around him). He's known since he was four that he was going to work with venomous animals — as he describes it, "I was not into fluffy bunnies or downy ducks. I liked my creatures sharp and full of chemicals." Not surprisingly, his fascination has led to a series of dangerous encounters; Bryan has been a patient in hospitals and clinics around the globe, and even as a child, he found himself on a first-name basis with medical staff because of his injury-prone hobbies. The reader gets to travel with Bryan to exotic locations, encountering the animals most people don't even see in zoos. And he describes, in horrifying yet thrilling detail, several brushes with death, from meningitis at 16 months old to whole-body paralysis from a snakebite. And that's just the tame parts of the book. In Venom Doc, Bryan truly bares all with a sort of in-your-face candor and lack of filter that makes him one of the most refreshing if intimidating people I know. And while at first, he seems to glorify what may at best be categorized as reckless behavior, Bryan's life story takes a sharp turn for the worse, and the reader sees him at his most vulnerable. "The wild and crazy adventures in the first 3/4 of the book document my Icarus-like flight too close to the sun," he says. "And then I inevitably come crashing back down to Earth."

Bryan decided to write Venom Doc after breaking his back in three places. The injuries forced him to stay bedridden for far too long, and ultimately, his body was wrecked by months of intravenous, long-acting opioids. "This was all some extremely intense stuff to deal with. I considered that other people may have gone through, or may go through, similar levels of life changing events. Sometimes when dealing with such matters, it helps to realize that someone else has gone through the same sort of stuff and written it all down." If you're a fan of the animals most love to loathe, then this book is definitely for you, what with the plethora of snakes, lizards and other animals that Bryan describes working with over the years. But in a broader sense, it's a story of one man's grand adventures and how they almost killed him — almost, but not quite. It's a narrative that many will identify with, but perhaps it's not for everyone: "It definitely should not be read by young children," Bryan notes. "It is too demented in places for that!" As for the future, Bryan plans to continue studying venoms and nurturing the next generation of venom researchers through his lab at UQ. He no doubt will keep traveling to dangerous locations and collecting venoms from the deadliest species on the planet — but he'll go about such field work "a bit more sensibly and less intensely," he says. "I have a darling wife and 2 crazy British staffies waiting for me at home each day and I love it." Venom Docis available through Amazon and on Bryan's website, and releases on August 25th. As its subtitle boasts, it really is "The edgiest, darkest and strangest natural history memoir ever." https://www.youtube.com/watch?v=CKdkTYgMRmc