A Restless Volcano Puts Ecuador on Edge Once More 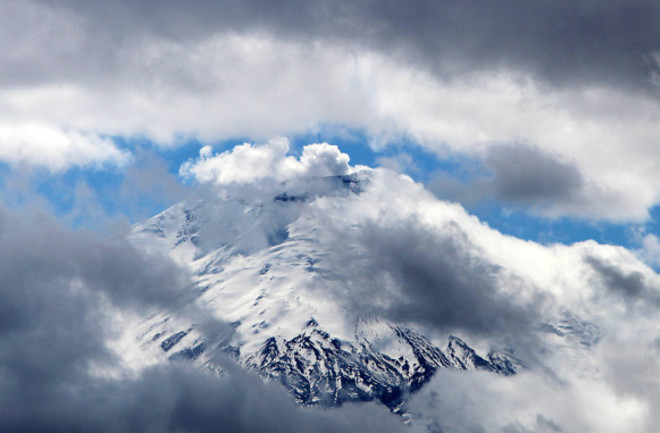 Cotopaxi, located only ~60 kilometers from Quito in Ecuador, has been silent for almost 75 years. Prior to this three-quarter century quiescence, the volcano was vociferous, producing dozens of potent eruptions over the two centuries. Most of these explosive eruptions where fairly small. However, in 1744, 1768 and 1877, the volcano unleashed larger eruptions that were on the same scale as the 2010 eruption of Eyjafjallajökull or Pelée in 1902 -- in other words, big. The 1877 eruption sent volcanic mudflows (lahars) over 100 kilometers from Cotopaxi. Then, after 1940, Cotopaxi went quiet*, and since has been a sentinel looking over the valley were Quito lies.

However, Cotopaxi is starting to show signs of restlessness. Now, it is unclear whether this restlessness might be the prelude to a new eruption, but in any case, Ecuador isn't taking any chances in preparing for the eventual awakening of Cotopaxi.

The most recent reports from the IG-EPN, Ecuador's volcano monitoring agency, say that the volcano is feeling over 100 small earthquakes per day, along with the signature tremor associated with fluid movement at a volcano. This increase in seismicity was first noticed in mid-May but has been slowly increasing ever since. Sulfur dioxide emissions are 5 times higher than the background level of ~500 tonnes/day. The steam-and-gas plume has also become more prominent, reaching 1-kilometer in recent days (and causing some alarm). The northeast flanks of the volcano are also experiencing low levels of ground inflation. Put all those signs together, and you have a volcano that is clearly heating up.

Until other signs appear, it is hard to say these signs mean a new eruption will happen. Everything described above could be hypothetically caused by changes in the hydrothermal system under Cotopaxi rather than magma rising. It is important to remember that more times than not, unrest at a volcano does not lead to a new eruption. Even so, the IG-EPN suggest that we might expect only steam-driven (phreatic) explosions as the interior of the volcano warms. Right now, the volcanologists and disaster planners in Ecuador have to play a waiting game until the signs of activity at Cotopaxi become clearer (or start to wane).

. Regions near Cotopaxi have been placed on Yellow alert status as well so that preparations can begin if any eruption occurs.

UPDATE June 18, 2015, 8:30 AM EDT: Apparently the news of the park's closure and yellow alert were inaccurate. The Secretary for Risk has put the area on a white alert -- which more or less means that the IG-EPN will continuously monitor the volcano's activity. Although the Armed Services posted on various social media that the National Park at Cotopaxi was close, the Ministry of the Environment says National Park is open and operating as usual.

A major eruption from Cotopaxi could have serious ramifications for Quito. The population of the Quito metro area is around 3 million people, meaning it is roughly the same size as Seattle. Thinking of Cotopaxi the same way that Seattle thinks of Rainier is a good place to start when considering the dangers the volcano poses.

You can check out loops of the most recent webcam images for the three camera pointed at Cotopaxi.