A Plan to Hide Humanity from Hostile Aliens 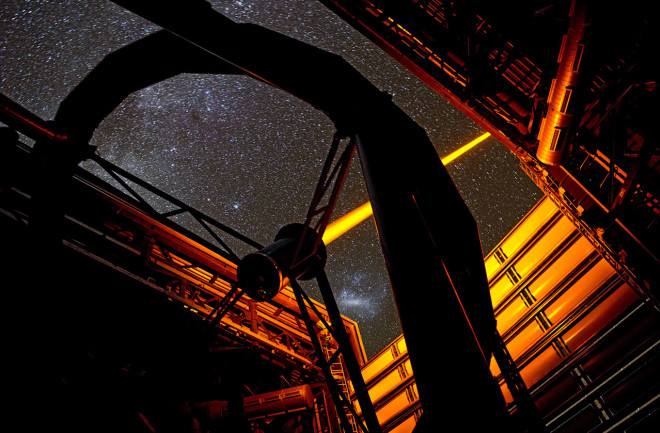 The new PARLA laser in operation at ESO’s Paranal Observatory. The yellow-orange beam of the brilliant seven watt laser is seen emerging from the dome of Unit Telescope 4 of the Very Large Telescope. In the background the Large Magellanic Cloud can also be seen. The laser creates an artificial star high in the atmosphere that can be used to correct images for the turbulence of the air and form much sharper pictures. (Credit: atacamaphoto.com/ESO) Earth is a bountiful planet rich in resources. And, if you believe Stephen Hawking, that might cause our demise. Such alien alarmists compare first contact to the devastation Europeans brought to North America. “We only have to look at ourselves to see how intelligent life might develop into something we wouldn’t want to meet," Hawking said back in 2010. "I imagine they might exist in massive ships ... having used up all the resources from their home planet. Such advanced aliens would perhaps become nomads, looking to conquer and colonize whatever planets they can reach.” And, in a scientific paper that sounds like it came into the world scribbled on a barroom napkin, Columbia University’s David Kipping and Alex Teachey now propose that humanity could hide its presence from these hostile aliens — with lasers. Their paper, “A cloaking device for transiting planets,” was published online March 30 in the Monthly Notices of the Royal Astronomical Society.

Astronomical instruments like NASA’s Kepler space telescope have found thousands of exoplanets by searching for characteristic dips in light as the planet passes in front of its star. This light reveals amazing details about a world’s size and orbital position. But this technique would work looking out from any planet in our galaxy. One NASA scientist estimates that, using technology equivalent to Kepler, alien astronomers could detect Earth from as far away as 1,300 light-years.

The light curve created by Earth passing in front of the sun might set off an alien invasion. (Credit: Astronomy/Roen Kelly) “As a consequence, it might take us less than a human life span to find out whether or not there are extraterrestrial astronomers who have found the Earth,” MPS astronomer René Heller recently said. “They may have detected Earth’s biogenic atmosphere and started to contact whoever is home.” However, a hostile race of aliens could use that information to realize Earth is in a Goldilocks-perfect position for liquid water. Assuming these creatures had much better space-faring technology than humanity, they could then jump in their starships and come capture the place for themselves.

Thankfully, hiding from such horrific Xenomorphs really isn’t that complicated, according to Kipping and Teachey. To cloak ourselves, humanity could emit a continuous 30 megawatt laser for 10 hours, once a year, and block our transit signal. That would hide the dip in sunlight Earth makes as it passes in front of the sun from an alien’s eye view. But in order to hide the planet in all wavelengths of light — rather then just the visible spectrum — earthlings would need to employ an array of tunable 250-megawatt lasers. That’s a significantly larger technological leap. Instead, the researchers suggest cloaking specific atmospheric signatures like oxygen, which would trick hostile aliens into believing Earth is a dead planet. The technology already exists for their proposal, and the cost really isn't prohibitive either.

"We've calculated that the solar panels on the International Space Station gather enough energy over the course of a year to power the laser array, so providing you can store that energy somehow it becomes very feasible indeed," says Teachey. "A ground-based laser array could be supplied with power through more conventional means, but a space-based solution would clearly have to use solar panels. The energy requirement is roughly equivalent to that used by 70 homes in the course of a year."

The cost of the lasers themselves would depend on the desired outcome. Cloaking Earth's oxygen would require somewhere in the ball park of $8 million worth of lasers. But a complete cloak across the light spectrum would costs more like $1.5 billion, according to the researchers.

Their findings are also applicable to those who take a more optimistic view of advanced aliens. Instead of hiding Earth’s signal from our Milky Way neighbors, astronomers might use lasers to broadcast a signal during transits, the researchers say. The signal would appear obviously artificial to alien scientists and could be embedded with a message.

To keep Hawking happy, such a message might include clear instructions: “Don’t eat us!”

Teachey says their research does not take a position on whether or not humanity should choose to broadcast or cloak the planet, but rather enables both options. He's personally on the fence about whether aliens would be benign or hostile.

"I tend to think that for a civilization to achieve high technology and stick around for a long time, it has to figure out how to put away primitive instincts like automatic aggression towards outsiders," says Teachey. "So I'm hopeful that a galactic community, if it exists, is largely peaceful. But throughout our history we have seen terrible atrocities committed when two civilizations with slightly different levels of technology have collided, and we certainly wouldn't want something like that to happen on a planetary scale."

Either way, Teachey thinks it would be wise to take a cautious approach.