A Peek at the Real Neil Armstrong 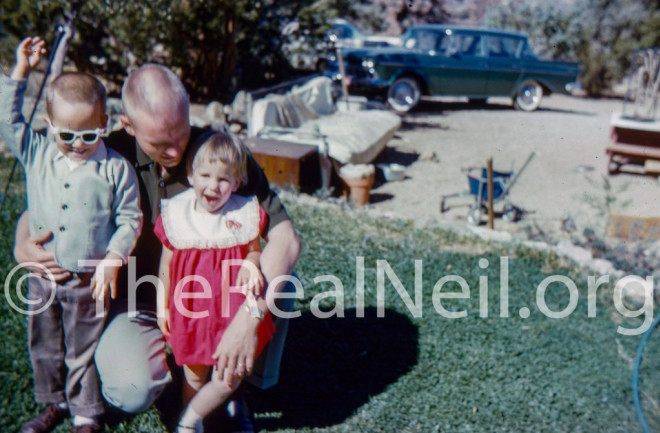 “First Man” gave us a look at a side of Neil Armstrong we don’t see too often, focusing on the family side of his life over the science element, but even that only gave us a glimpse of the behind-the-scenes home and family life of the notoriously stoic first man on the Moon. Now, the brand new Armstrong-Engel Family Gallery has published personal, never-before-seen images of Neil and his family beginning in 1955 during his Edwards days gong all the way to 1969 and the Moon landing.

The gallery is the legacy of Neil Armstrong’s mother, Viola Armstrong, née Engel. Family legend has it that Viola researched the best types of film for different of cameras to make sure the prints would stand the test of time, bought a camera from a local shop in Neil’s hometown of Wapakoneta, and took the pictures that show us the real Neil.

Neil worked as a test pilot at Edwards AFB in the 1950s, flying, among others, the legendary X-15 rocket-powered plane. But not all his transportation was as futuristic. He had a collection of cars, none of which were in great working order, so resourceful engineer that he was he came up with some ways to compensate for unreliability. The Armstrongs lived up in the hills near Pearblossom Highway, so he’d start the car rolling down the hill and see if it started. If it did and sounded good, he’d go to work. If it didn’t, he’d swing a left into a repair shop, walk home, and try another one.

He also, apparently, made some repairs to the house himself. Here he is fixing the house while his father Stephen entertains his little grandson Rick. c. late 1950s.

The movie “First Man” focusses heavily on Neil’s suffering after the loss of his daughter Karen while at Edwards. Here’s the now infamous Karen Armstrong in the late 1950s at home in California with her parents.

Neil and Janet watching their daughter ride a tricycle on the patio at home in California. c. 1960

When Neil joined NASA’s astronaut corps with the second group of astronauts in 1962, the so-called “New Nine,” it meant relocating from California to Houston, which got a brand new Maned Spaceflight Centre around the same time.

Gemini 8 is, in my opinion, the most underrated mission in an already painfully overlooked program (really, Gemini was amazing, so much so I do have a Gemini tattoo). Gemini 8, Neil’s first flight, was intended to cross “docking” off NASA’s lunar to-do list — if Apollo astronauts were going to have to connect separate spacecraft in orbit around the Moon it was vital they get some practice in the relative safety of low Earth orbit. And a good thing, too. A stuck valve on the Gemini spacecraft sent Neil and his pilot Dave Scott into a nearly fatal spin that took a seasoned test pilot to get out of.

Flying, of course, remind a way of life for the Armstrongs.

Let’s be honest. No one likes being stuck in an airport waiting for a flight. Which is why it’s great to fly private if you can manage it.

The Armstrong family hopes that the images in the Armstrong-Engel Family Gallery will both inspire the next generation of explorers and also illustrate that Neil was, as his sister June once said, “the man you saw.”

You can see the whole collection, which is still growing, at https://www.therealneil.org. For more on Neil, including the car rolling down the hill story, check out First Man by Jim Hansen.