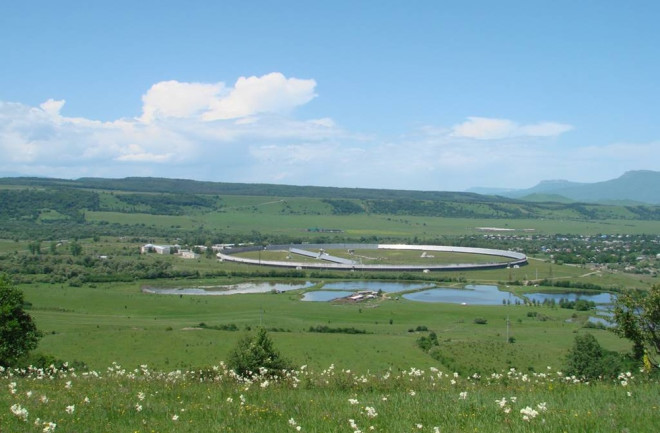 This 2013 photo shows the RATAN-600 observatory, where a recent microwave transmission has SETI researchers excited. (Credit: Wikimedia Commons) It could be nothing. In the kinds of circles that search for transmissions from alien civilizations, it always is. But nonetheless, Russian researchers in the Search for Extraterrestrial Intelligence (SETI) have something intriguing they're pursuing. Let's heavily caveat this. SETI efforts worldwide have had plenty of promising signals. None of them have been confirmed to come from extraterrestrial civilizations. Several have turned out to be from terrestrial sources, and early on, two high profile "What ifs?" lead to the discovery of pulsars and quasars rather than alien megastructures or technologically advanced societies. Still, there's enough substance to this message that researchers working from the RATAN-600 observatory in Russia are investigating what might have caused it. They've pinpointed a likely star, HD 164595, which is located in the Hercules constellation. It's known to have one planet, a Neptune-sized world in a 40 day orbit. Given that HD 164595 is a sun-type star, that planet would be too hot for life, but there may be other undiscovered planets in the solar system. The signal was first detected in May 2015 at the 2.7 cm band, which is around 11 Ghz in the super-high frequency band. That places whatever the signal was in the microwave band. As Lee Berger at Ars Technica points out, there's no known astrophysical source at these wavelengths. There's some chatter that if (BIG if) this is of non-natural origin, it could be slightly to moderately more advanced than our own. "... if it came from an isotropic beacon, it would be of a power possible only for a Kardashev Type II civilization," Paul Gilster at Centauri Dreams writes. "If it were a narrow beam signal focused on our Solar System, it would be of a power available to a Kardashev Type I civilization." In the Kardashev scaled, Type I civilizations are those somewhat like our own, technology-wise, able to utilize radio signals to reach out and make contact. Type II are more technologically advanced civilizations, the type brought up when we talk about "alien megastructures" like some people have theorized may be around Tabby's Star. There are other natural reasons that may have caused this. Gilster points to both potential "noise" contamination from other sources could have played a role, as well as a microlensing event which could have boosted the signal from something natural in the background. More telescope time is needed to figure it out and get to the bottom of it. Researchers could then see if it repeats (a much-needed element of SETI research, in order to gather as much data as possible), if there are other unexplored natural scenarios that could have created it, or any other scenario that might be possible. After that, we can say for sure whether or not it's aliens. But for now let's go with just the words "promising," and hope for the best but prepare for it to be bupkis. Or at least bupkis in the "is it aliens?" department.