A New Kind of Storm Appears on Saturn, Puzzling Astronomers 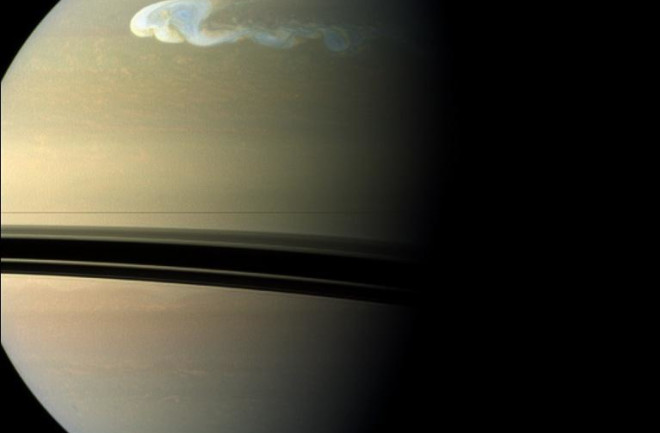 A large storm on Saturn, commonly referred to as a Great White Spot. (Credit: NASA/JPL-Caltech/SSI)

As serene as it appears in photographs, the gas giant Saturn is not a peaceful place. Its golden gases whiz around the planet at up to 1,000 mph. At times, massive storms thousands of miles wide break out in its upper atmosphere.

In 2018, astronomers spotted a new kind of storm on Saturn. Four large tempests formed one after another, passing by each other and further disturbing the atmosphere to create a complex storm system that lasted for months.

Computer models let the researchers estimate the energy behind the event and compare it to other storms on Saturn. Studying these phenomena in more detail may let astronomers better understand the complex behaviors of the giant planet’s atmosphere. A team of scientists from Spain, Australia, the U.S. and France presented the research Monday in Nature Astronomy.

A New Kind of Storm

The researchers first noticed the new storms in photographs that amateur astronomers had taken and uploaded to a public online repository. They spotted the first of the four storms in March 2018, visible as a distinct white spot near Saturn’s north pole. The following three storms popped up in the months after. With several months of follow-up study, the researchers realized that this series of storms was different from those seen before.

“This is a new type of storm that is telling us something about the unknown formation mechanisms,” of these storms, said Enrique García-Melendo, an astronomer at Universitat Politècnica de Catalunya and one of the leading authors of the study, in an email. The way these storms form likely depends on not-fully-understood interactions between water vapor, seasonal differences in exposure to sunlight and the complicated, multilayered atmosphere.

Saturn’s storms tend to come in two main sizes. The smaller storms are usually a little more than 1,000 miles across and last several days. The larger type, called Great White Spots, are gargantuan storms 10 times as large. Astronomers have only seen seven of them since 1876.

For some reason, these Great White Spots tend to appear somewhere in Saturn’s northern hemisphere about every 30 Earth years. This is equivalent to once each Saturn year, usually during the same season or time of year on the gas giant. The new series of four intermediate-sized storms appeared in 2018, at about the right time to fit into this cycle.

Astronomers don’t yet understand how this repeating cycle of storms might be related to seasons on Saturn. It might be linked to how the atmosphere heats and cools as it receives different amounts of sunlight, the researchers said. The complicated behavior of water vapor responding to changes in temperature and pressure could play a role as well.

The researchers hope that future observations with the James Webb Space Telescope and with larger Earth-bound telescopes will let them learn more about these storms and one day solve the mystery.