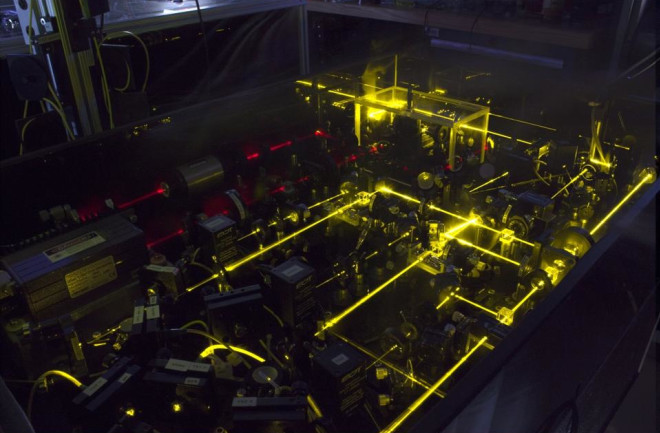 For years, researchers have been hunting for dark matter, which is thought to make up about 27 percent of the entire known universe. Now, an innovative team of scientists says they may have figured out a new way to detect the elusive substance using an international network of atomic clocks.

In the early 1930s, astronomers such as Fritz Zwicky and Jan Oort wondered at apparent discrepancies between the visible matter astronomers could map in the universe, and the amount that should be expected, based on physics. Then, in the late 1970s, Vera Rubin and Kent Ford noticed something off about the rotation of the Andromeda Galaxy: The material at the galaxy’s edges was rotating at the same speed as the material at the center, which violated Newton’s Laws of Motion, assuming the only matter in the galaxy was the visible matter they mapped.

The same effect cropped up in other galaxies as well, leading astronomers to suspect that some “extra matter,” which could not be seen in the same way as glowing stars and gas, was responsible for the unexpected rotation. Today, scientists call that extra matter dark matter, and it can thus far be detected only through its gravitational effects on the visible matter we can see.

With a new generation of super-precise atomic clocks, an international team of researchers says they may have a new way to catch dark matter as it interacts with regular matter — something that scientists assume must happen, but haven’t yet been able to see.

All clocks rely on stable oscillators, like the pendulum in a grandfather clock or the earth’s rotation for a sundial. In an optical lattice atomic clock, a type of atomic clock that’s still being developed and perfected, atoms act as the oscillator.

In these clocks, a laser is shined through a cloud of atoms — usually of strontium or ytterbium. This laser excites the atoms to oscillate, or move back and forth hundreds of trillions of times per second. The oscillating atoms act like the hand on a watch, if a watch had a hand that ticked insanely fast. Atomic clocks of this design are supremely accurate — the current generation won’t lose a second for billions of years to come.

That accuracy makes them ideal for making very small, very precise measurements, including, perhaps, of dark matter. Without any interference from dark matter, the atoms in an optical lattice atomic clock will oscillate at an expected frequency. The presence of dark matter would affect this frequency through the interactions between dark matter particles and regular matter. Any observed frequency dips or spikes would then be evidence for dark matter.

In this study, researchers used four optical lattice atomic clocks, placed in Colorado, France, Poland, and Japan. This is the first time that a network of these atomic clocks has been created. By having more than one atomic clock in a network, scientists can make more observations and help tune out some of the noise that comes from having only a single data source, said physicist Piotr Wcisło, who led the study, in an email.

The first version of the network allowed the researchers to place further constraints on the size of the expected effects any dark matter interaction might have. That is, they didn’t find anything yet, but they’re narrowing the search down.

This work is detailed in the journal Science Advances.

[UPDATE: This story has been updated to include the correct definition of dark matter.]