A New Crew Member for the Space Station: The "Robonaut 2" 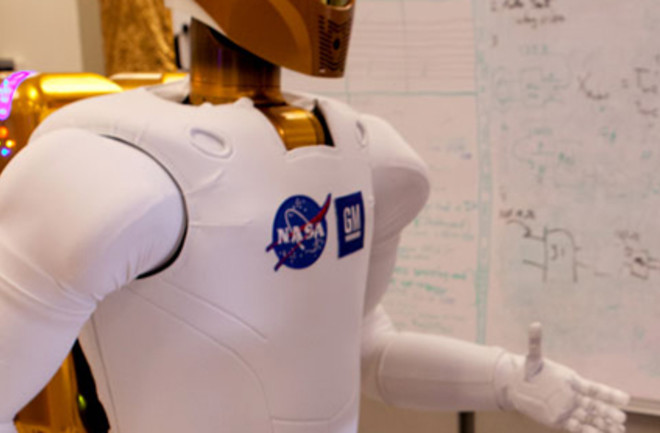 Have robots got the right stuff? We'll soon find out, as NASA has announced that one of the last flights of the space shuttle will carry a humanoid robot, Robonaut 2, up to the International Space Station.

The two-armed 'bot is the result of a venture by NASA and General Motors, and will help the researchers involved identify in what ways a robot could be a help to human explorers in space. Before it gets to go on its first space walk, however, it'll be monitored to see how well it deals with weightlessness [DVICE]

. The robot isn't much more than 300 pounds of torso, head, and arms, with wheels for locomotion rather than humanoid legs. But NASA hopes it could one day work alongside human astronauts, perhaps helping them during spacewalks. While we've blasted plenty of unmanned explorers into space, this will be first largely humanoid robot to venture beyond our home planet. NASA and GM first showed off Robonaut 2 (or R2) in February, and it will fly to the ISS for this test mission on board the shuttle Discovery in September. Back here on Earth, GM hopes to use R2 to help out workers building cars on factory floors. GM and NASA have been in business together since the automaker produced lunar rovers for Apollo missions, and could see more collaboration as President Obama pushes for more collaboration between NASA and private enterprise (though the government still owns the majority share of GM). The space agency is pushing the same kind of collaboration with Chrysler:

What the three-year alliance between Chrysler and the space agency could generate are lighter-weight materials, more dexterous, even human-emulating robots and advanced batteries that ease drivers' worries about running out of electricity on a transcontinental trip [Detroit Free Press]