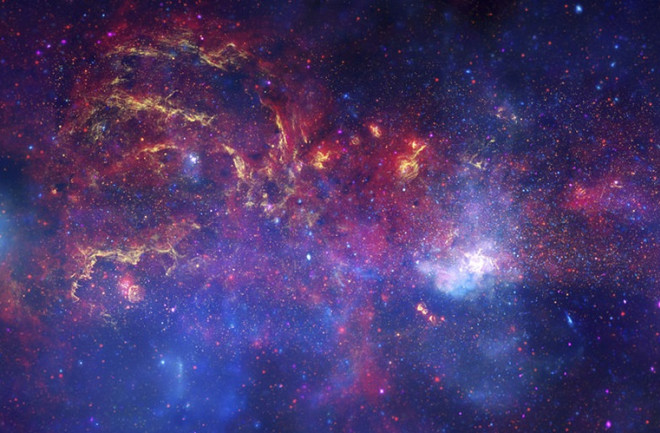 An image of the center of our galaxy, where Sagittarius B2 is located. (Credit: NASA/JPL-Caltech/ESA/CXC/STScI) A peculiar new molecule hovering within a star-forming dust cloud in deep in space could help explain why life on Earth is the way it is. The cloud, called Sagittarius B2, resides near the center of the Milky Way, and it's there that researchers from the California Institute of Technology discovered an organic element that displays a key property shared by all life. Propylene oxide is the first element discovered outside of our solar system to exhibit chirality, or the presence of two distinct, mirror-image forms. Many complex molecules have this property, including myriad organic molecules necessary for life. The chemical formula of these two versions is exactly the same, but the structure is flipped.

All life on Earth is composed of chiral molecules, and the versions organisms use, either right- or left-handed, determines fundamental properties of their biology. For example, all living things only use the right-handed form of the sugar ribose to form the backbone of DNA, giving it that the signature twist. You can think of molecular handedness by picturing gloves — hence the "handed terminology". The gloves, or molecules, may look similar, but you could never put a left-handed glove on your right hand. Ignoring the chirality of the molecules that we put in our bodies can have deadly consequences. The drug thalidomide, used in the mid-20th century as a sedative for pregnant women, turned out to cause terrible birth defects if taken at the wrong time. It turned out that thalidomide was made up of chiral molecules — some were left-handed and others were right-handed. One version would act as a sedative, while the other would lead to birth defects. The fact that we are made up of molecules that look one way and and not the other has long presented a near-ontological question for researchers. The various building blocks of life here, sugars and amino acids, all share chirality with each other —sugars are all right-handed and amino acids are all left-handed — what's called homochirality. While just one version may exist here on Earth, both right and left-molecules are possible. It isn't known how life on this planet chose its preferred molecular handedness. The question for researchers now is whether molecules on Earth are inherently better suited for life, or if chirality is a product of pure chance. It could be that conditions in the universe favor one form of organic molecules over the other — it has been suggested that the way that photons or electrons are polarized could preferentially destroy one form of a molecule over another. "[It] provides us with a lab to try and test theories about the role chiral molecules played in the origins of life on earth and elsewhere in the galaxy," says Brandon Carroll, a PhD candidate at Caltech and coauthor of the paper.

The researchers found traces of propylene oxide in Sagittarius B2 with the help of two radio telescopes, one in West Virginia and one in Australia. Every molecule emits radio waves in a unique frequency as it moves through space, which serves as an invisible signature. Using radio telescopes, researchers detect these emissions and match the wave frequency to known spectra. Using this method, the Caltech researchers determined that Sagittarius B2 contains significant amounts of propylene oxide, an organic chemical often used to manufacture plastics here on Earth. While this propylene oxide is not used by any organic lifeforms here on Earth, it does prove that finding chiral molecules beyond our solar system is possible. They couldn't determine which form of the molecule was present in Sagittarius B2, but the researchers say that it may be possible to determine handedness in the future by exploiting differences in how polarized light passes through the cloud. We have previously found chiral organic molecules on comets and asteroids from our solar system, but scientists wanted to discover the presence of such molecules beyond our backyard. Our entire solar system was likely formed from a cloud of dust and gas much like Sagittarius B2, and the chirality of the molecules that went on to form the Earth, and eventually us, determined some of the most basic features of Earthly life. Discovering chiral molecules elsewhere is an important step toward elucidating the role that chirality plays in creating life and guiding its development. This post has been updated to clarify that amino acids and sugars display different handedness.