Carl Agee finds ways to get his hands on samples of Earth's hellish interior and the exotic surfaces of other worlds. 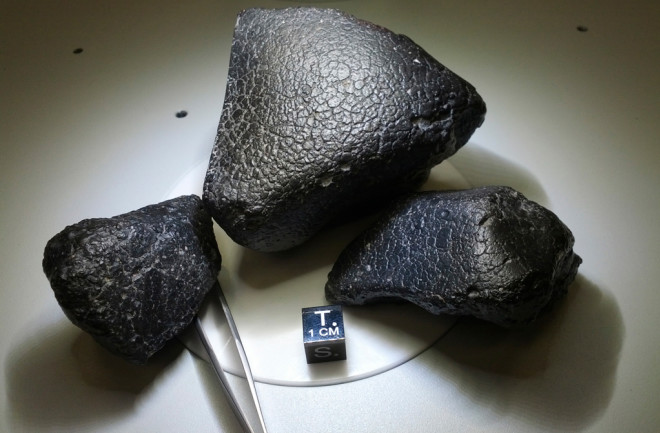 [This article originally appeared in print as "Touching the Untouchable."]

There is something special about touch. It is the truth teller that proves the other senses: A bench bearing a “wet paint” sign is not truly wet until we have tapped it with a probing finger. Conversely, an air of unreality hangs over anything we cannot touch. A scientist studying the geology of distant planets and long-ago times, then, seems condemned to live in a perpetual bubble of abstraction.

A conversation with Carl Agee quickly sets me straight. His title is director of the Institute of Meteoritics at the University of New Mexico, but he might be better described as a man who touches the untouchable.

Agee daily re-creates conditions deep inside Earth, explores geologic events from billions of years ago and probes the chemical secrets of other planets. Recently, he made headlines with his study of a triangular, 11-ounce rock nicknamed Black Beauty.

“At first no one knew what it was exactly,” Agee says. “It just looked so different from anything I had ever seen.” His laboratory analysis, published earlier this year in the journal Science, proved it is actually a meteorite that originated on Mars and, intriguingly, comes from a location that was abundant with water.

Black Beauty offers a snapshot of a time when Mars was much more Earth-like. It also complements the surveys under way on the Red Planet by NASA’s Curiosity rover. But while that $2 billion robot was creeping across the landscape, laboriously performing its onboard tests and radioing hints about Mars’ geology back to Earth, Agee unleashed the full power of his lab’s instrumentation on Black Beauty.

And holding a piece of the Red Planet right there in his hand.

When he was a student at Columbia University in the 1980s, Agee already knew he wanted to take a tactile approach to studying how planets form and evolve. His first approach was to create otherworldly conditions right in his lab.

“I was doing high-pressure studies, using new techniques able to access pressures and temperatures that had previously not been available,” Agee says. Those techniques would allow him to simulate the conditions deep inside the solar system’s planets as they began forming about 4.6 billion years ago.

For two decades, Agee dispatched a variety of elaborate presses and heating mechanisms to crush samples at pressures up to 3.5 million pounds per square inch and temperatures approaching 4,500 degrees. The size of the specimens he worked with might seem minuscule to an outsider — about 1 cubic millimeter, comparable in size to a coarse grain of sand — but to Agee, such a speck is a world in miniature.

“It’s big enough that it melts; you can form hundreds of crystals,” he says.

Agee’s process was straightforward. Open the press, and put in a sample comparable to the raw materials that formed Earth. Apply the kinds of temperatures and pressures that would have prevailed inside the growing planet. Then sit back and see what happens. Which elements stick together and which ones go their separate ways? What sinks and what floats?

What rose to the top represented Earth’s crust. We live on the crust and know its composition exactly, so Agee could keep adjusting his experiment until it exactly matched reality. Then whatever remained represented the other, sunken portion, and Agee could finally hold a tiny piece of the deep interior of the Earth.

Agee found strong experimental support for a theory that the infant Earth completely melted to a depth of hundreds of miles, allowing heavy metals to separate rapidly from lighter rocky materials — like oil fleeing from water.

“That’s how you can go from a lab experiment a cubic millimeter in size to saying sweeping things like, ‘The whole process of differentiation and core formation wrapped up very fast in geologic terms, taking only a few million years,’ ” he says with a lingering flutter of amazement in his voice. “It’s incredible when you think about it.”

A Bit of Mars in the Lab

Despite these impressive successes, Agee’s interests began to drift to meteorites — another youthful passion — when he was named the director of the Institute of Meteoritics in 2002. The agency was founded in 1944 as a meteorite collection, but by the time Agee took over, it had evolved into a research collection dedicated to studying space from the ground.

That work brought Agee in contact with all sorts of exotic objects, including meteorites that apparently originated from the moon and Mars. But nothing prepared him for Black Beauty or, as it was originally cataloged, NWA 7034.

Like so many meteorites that came to Agee’s attention, this one racked up a lot of miles first. It was found by a nomadic meteorite hunter in Morocco (hence “NWA,” for Northwest Africa) who sold it to a local dealer, who sold it to a major collector named Jay Piatek, who finally donated it to the institute.

Agee treated NWA 7034 like any other new arrival, prodding it with his high-tech tools to classify it. “It’s sort of like a treasure hunt,” he says. “Usually after a session on the electron microprobe, I can say exactly what kind of meteorite it is. Is it a Martian? Is it a lunar? Maybe it is a terrestrial rock that just looks like it might have been a lunar or a Martian. We call those meteorwrongs.”

NWA 7034 didn’t fit into any category, however. Agee grew so frustrated that he set it aside for a month, then tried again. This time he cut into it with a diamond saw and began analyzing it from the inside. He was still puzzled by the result. “It was suggestive of Mars, but it wasn’t like any other Martian meteorite,” he says. Strangest of all, it was full of water — 10 times as much as any other known piece of the Red Planet. That oddity ultimately proved to be the key clue.

Black Beauty did not match up with the other Mars meteorites, Agee realized, but it did closely resemble something else: the rock and soil samples analyzed by NASA’s Spirit rover at Gusev Crater on Mars, where the minerals show clear evidence that water was once present.

By dumb bad luck, all the other Mars meteorites had originated from the dry parts of the planet. In contrast, NASA deliberately sent its rovers to places that looked like they were once wet. With Black Beauty, scientists on Earth finally had a sample that matched the potentially life-friendly locations that the rovers were exploring.

At last, the pieces of Black Beauty’s story began to fall into place. Radioactive dating indicated that the meteorite is 2.1 billion years old, placing its origin in the middle of a little-understood stage of Martian geologic history known as the Amazonian.

“It’s a period when Mars was probably transforming from a wet, warm place — perhaps a harbor for life — to what we see now: a dry, cold, inhospitable environment, not good for life,” Agee says. He interprets Black Beauty as a volcanic rock that got exposed to a lot of water on the way up to the Martian surface. Perhaps it erupted through groundwater, or perhaps it was part of a geothermal system.

“We don’t know what the state of the water was. We just know that there was plenty of it, and that’s very exciting,” Agee says.

The rock sat on the surface for eons until an asteroid struck Mars and flung bits of its crust into space. One chunk of that debris floated around in space for roughly 5 million years — Agee can tell by the traces of cosmic radiation etched into the rock — until it fell to Earth, and ultimately into Agee’s lab.

To Horton Newsom, a co-investigator on the Curiosity rover and Agee’s colleague at the University of New Mexico, having access to a water-rich Mars rock here on Earth is a revelation. “This sample is big enough to study with a wide range of laboratory techniques that really expand our knowledge of the surface of Mars,” he says.

Black Beauty will allow NASA scientists to recalibrate chemical results from their rovers and from orbiters. It will deepen our understanding of Mars’ formation as well as its comparatively recent climate history — “the whole planet, across space and time.” And, Newsom adds, “it is just thrilling to think that these samples you can hold are from other worlds.”

Agee has plenty of research yet to do on Black Beauty, including partnering with other scientists to search for traces of organic material that would help answer whether Mars could truly have supported life. But he is already anticipating what other inaccessible places he can get his hands on. “The next challenge is to find a meteorite from Venus,” he says. “That would be a jackpot for sure!”