A History of Pluto Exploration

As New Horizons' journey culminates in the July 14 Pluto flyby, explore how a search for Planet X over a century ago led scientists on a wild ride of dwarf planet discovery. 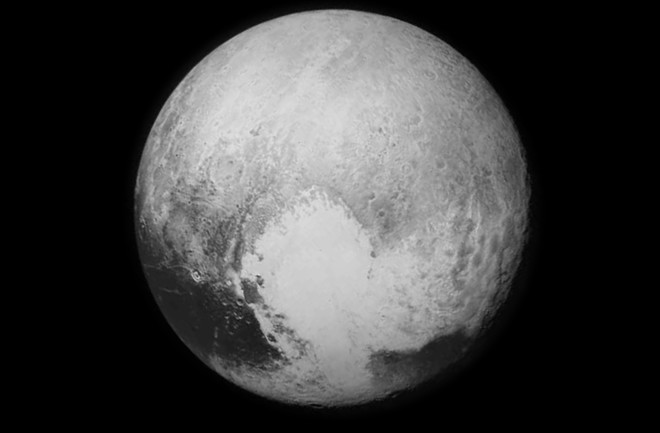 Percival Lowell launches a search for "Planet X." His calculations are based on inaccurate contemporary estimates of Uranus' mass, but his quest will eventually turn up a different world.

Clyde Tombaugh discovers Pluto from Lowell Observatory in Arizona by seeing it move on photographic plates over a six-day period.

Gerard Kuiper and others propose the existence of a large belt of icy objects beyond Neptune.

Dale Cruikshank, Carl Pilcher, and David Morrison discover methane ice on Pluto, providing the first indication that the planet's surface is icy rather than rocky.

James Christy and Robert Harrington discover Pluto's largest moon, Charon. It appears as a slight elongation in these images of Pluto.

A series of mutual occultations between Pluto and Charon begins, allowing scientists to measure the objects' diameters and much more.

About a dozen planetary scientists gather for dinner at a small Italian restaurant in downtown Baltimore. They call themselves the Pluto Underground, and the group decides to force the issue to get NASA on board with a mission to Pluto.

David Jewitt and Jane Luu discover 1992 QB1, the first sighted partner to Pluto orbiting beyond Neptune, opening up a whole new realm of the solar system, that of the Kuiper Belt objects. Today, scientists know of more than 1,200 such trans-Neptunian objects.

NASA selects the space probe New Horizons for a mission to Pluto.

The International Astronomical Union redefines the term "planet," demoting Pluto to dwarf planet status and lumping it with Eris, a Kuiper Belt object similar in size to Pluto discovered in 2005.

New Horizons reaches its halfway point (in distance) to Pluto.

New Horizons awakens from hibernation and prepares for its Pluto flyby.

New Horizons makes its closest approach to Pluto, flying some 7,700 miles from the planet's surface.

Read our latest coverage of the New Horizons mission here »