A Heavenly Disk To Map The Universe

How to turn one telescope into hundreds. 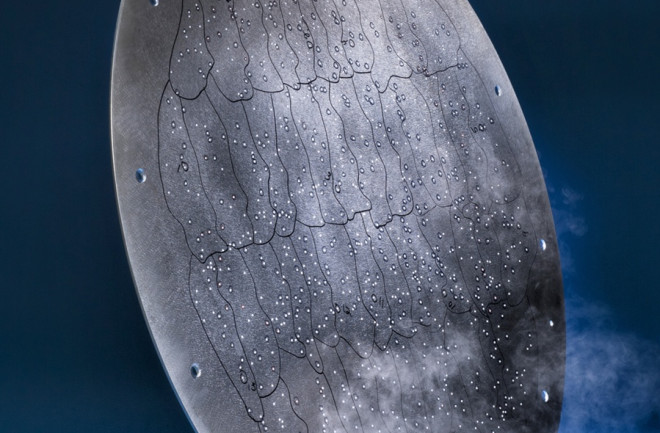 No, it’s not an alien artifact. Since 1998, the Sloan Digital Sky Survey (SDSS) has used thousands of metal disks like this — called plug plates — to map the universe. Workers called plate pluggers clamp these disks atop a 2.5-meter telescope in New Mexico, after threading optical cables into the hundreds of holes. Each one lines up with the light from a known galaxy or star. This creates, in effect, an armada of tiny telescopes, each hyper-focused on a single celestial sight.

Now in its fourth phase, SDSS has mapped the Milky Way in 3D, surveyed millions of nearby galaxies, and more. It’s like Google Earth for the cosmos. Along the way, the plates themselves have become iconic, recycled into coffee tables, museum pieces, even fine art sculptures. But soon they’ll all be relics. Starting in 2020, SDSS-V will use mini robots to aim optical cables at the sky, charting our cosmic metropolis faster than ever before.