A Final Message From Mercury

NASA probe uncovers a lively planet before meeting its demise at 8,800 mph. 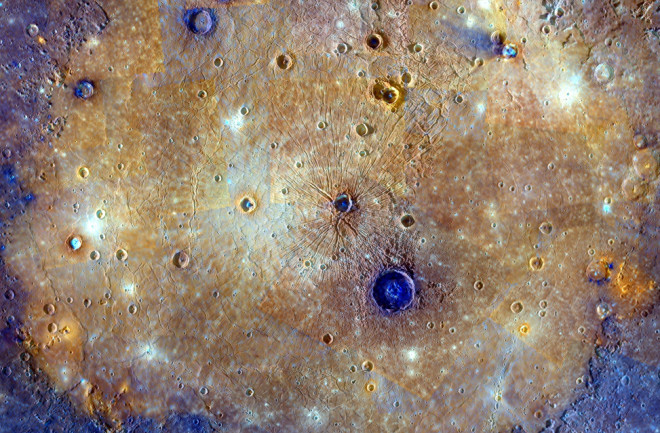 Mercury was the “dead” planet when NASA’s MESSENGER mission launched in 2004. But the spacecraft’s 2011 orbital arrival, and more than 250,000 subsequent images, documented an active planet. Running on fumes this year, MESSENGER (short for Mercury Surface, Space Environment, Geochemistry and Ranging) saved the best for last, swooping just miles above the virtually atmosphereless planet. It gathered fresh evidence for frozen water in crater corners, strange rock features called hollows and the evolution of a magnetic field almost 4 billion years old. The craft finally smacked into Mercury at 8,800 mph on April 30. This view of 1,000-mile-wide Caloris basin — among the largest known asteroid impacts in the solar system — shows how lava (orange) filled the blast site before new craters excavated the original basin (purple).