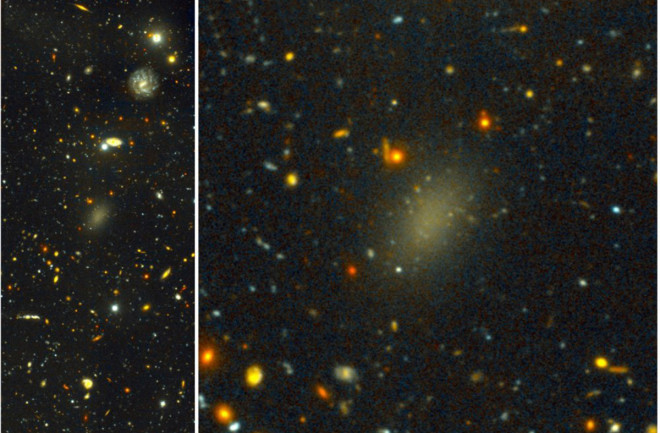 The galaxy Dragonfly 44 is roughly the same size and mass of the Milky Way, but it’s much fainter, barely visible in the wide-angle shot (left). Zooming in (right) shows more detail of the elongated galaxy, including the spherical clusters of stars around its core. Dragonfly 44 is dim because most of its mass is dark matter, which makes up a shocking 99.99 percent of the galaxy. | Pieter van Dokkum, Roberto Abraham, Gemini, Sloan Digital Sky Survey

Astronomers often hunt faint objects across the universe. But Yale University’s Pieter van Dokkum and the University of Toronto’s Roberto Abraham wanted to scour the sky in a new way — by looking for the hazy light of galaxies close to home. It paid off: Using their new Dragonfly telescope, they uncovered 47 extremely faint, spread-out galaxies. These hard-to-find objects seem to be made almost entirely of dark matter, the famously mysterious substance that holds galaxies together and doesn’t interact with light.

In early 2016, the pair tracked stars within one of the brightest of these galaxies, named Dragonfly 44, to learn its mass and other characteristics. Their analysis, published in The Astrophysical Journal Letters this summer, shows Dragonfly 44 has roughly the mass of and a similar size to our Milky Way — but far fewer stars. What’s making it so heavy?

The astronomers calculated that 99.99 percent of Dragonfly 44’s mass must be dark matter — a proportion current galaxy formation theories can’t explain. “It opens up this question,” says van Dokkum. “How dark can galaxies really get?”