A Costa Rican Volcano Sees Its Biggest Blast in Years 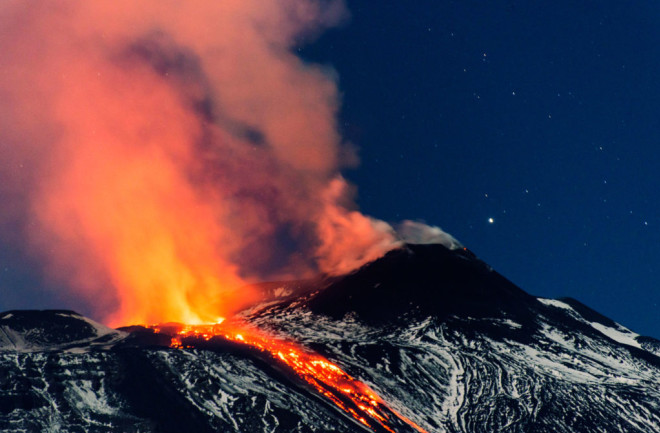 Mount Etna spews lava during an eruption on April 11, 2017.Salvatore Allegra/AP Some updates on current volcanic activity worldwide: On April 13, Poás in Costa Rica had its largest explosive eruption in years. The explosion was mainly driven by water heated at the summit crater lake/vent area, generating what is called a "phreatic" eruption. Although water turning to steam is the main player, these explosions can still produce plumes that reach over 1 kilometer (~3,200 feet). This eruption at Poás did just that, with plumes 500 to 1,000 meters tall. News reports also mentioned ash fall in the surrounding region, incandescent blocks suggesting magma relatively close to the surface, and boulders 2 meters wide being thrown from the lake vent. (They broke the floor at the Poas visitor's center!) Passengers on a flight out of San José got quite a view of the eruption. You can watch video of the eruption that was captured by the webcam at Poás. The eruptions have continued, with another blast on April 18.

As we left San Jose Costa Rica this morning, we had a great view of the La Poas Volcano eruption. We found out tha… http://t.co/Db2hiOtcgxpic.twitter.com/thAG3CzvVT

A video posted by OVSICORI

showed the new ash around the Poás crater. Large blocks are evident on the crater floor along with dark gray ash. The view of the summit region shows off the volcano's multiple crater vents, including the active one and another at slightly higher elevation still filled with a bright blue lake. The OVSICORI scientists have determined

that although most of the material that has been erupted so far is old lavas, there is a small percentage of new magma. This means that we are not likely to see these explosions ending soon---so the area around Poás has been closed to all people

. Meanwhile, over on Sicily, Etna

continues to have an active 2017. A number of lava flows

issued from the New Southeast crater from April 13 to 15, marking the fourth eruptive period for the volcano

this year. After a few days, the lava flows started up again while strombolian explosions continued

from the summit craters. There is some great time-lapse video

showing the lava flows slowly moving down the slopes of Etna. You can definitely see how the flows, even though they are relatively low viscosity for magma, still move more like a pile of rubble being shoved from behind rather than a "river of lava." Be sure to watch the BBC segment

, who monitors and documents Etna's eruptions for the Etna Observatory. Nishinoshima

, sending new lava flows into the sea. This is the first activity at Nishinoshima since November 2015, when two years of eruption ceased after erupting over 100,000 cubic meters (3.5 million cubic feet) of lava. This likely means the island will grow even more, as the 2013–2015 eruption produced a new cone and greatly increased the size of the barren island. That change in size means Japan has also expanded its territorial waters by 70 square kilometers

returning to the island as well.