After eight decades, most of the universe is still missing from view, forcing astronomers to abandon the notion that seeing is believing. 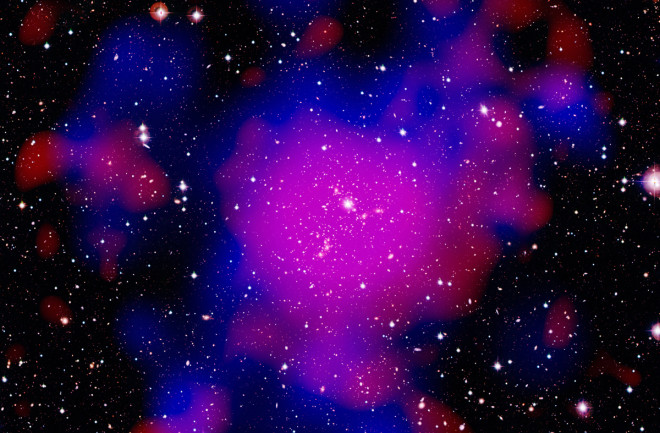 Often in science it takes a long time to understand exactly how confused you are. Nobody knew to wonder how the dinosaurs went extinct, for instance, until 19th-century fossil diggers realized that dinosaurs had existed in the first place. In the case of dark matter — the unseen something that seems to make up about five-sixths of the matter in the universe — the confusion has been building for a good 84 years, and shows no sign of going away.

That’s not how it was supposed to be. A few years ago, various instruments seemed hot on the trail of the unseen cosmic component. In space, the orbiting Fermi Gamma-ray Space Telescope detected possible hints of dark matter particles breaking down into visible components. In an Italian laboratory, an international team claimed provocative evidence of a seasonal “wind” of dark matter blowing through its specially designed detector, called DAMA. And 4,850 feet underground, in an abandoned South Dakota gold mine, the enormous Large Underground Xenon (LUX) dark matter detector geared up to collect the definitive data on the long-sought dark particles.

But instead of enlightenment, what followed was a new wave of confusion. The Fermi signal looked like a mix of known astrophysical processes and random galactic noise. The DAMA results did not match up with data from other detectors, and so aroused widespread skepticism. As for LUX, it was a huge success — just in a negative way. It delivered a high-quality null result, the scientists’ way of saying that they found exactly zero evidence for a great many of the hypothesized or allegedly detected dark matter particles.

Only about one-sixth of the deduced mass of the galaxy clusters can consist of atoms. Not only is most of their matter dark, then, but the dark matter simply cannot be the same kind of stuff that we are made of.

Science, like nature, abhors a vacuum, so a variety of new theories have whooshed into the void. Perhaps dark matter is bunched together into large, elusive clumps; perhaps it interacts with ordinary matter even less than physicists expected. Dark matter is so peculiar and puzzling that it has inspired far-grasping speculations even from sober-minded researchers. Harvard physicist Lisa Randall has just published an entire book exploring the argument that dark matter might have indirectly killed the dinosaurs.

This all sounds a bit like chasing unicorns — indeed, cheeky grad students have placed little paper unicorns all around the LUX facility — except for one huge, exciting, maddening fact: Dark matter really exists.

You may well ask how I can say that with such certainty. In fact, many of you do ask, on Twitter, Facebook and online comments sections. The question deserves a serious answer.

The case for dark matter began in the 1930s with a pair of papers by two very different kinds of geniuses, the buttoned-down Dutch astronomer Jan Oort (who also hypothesized the Oort Cloud of comets) and the explosive Swiss-American cosmologist Fritz Zwicky. Oort noted that the motions of stars within our galaxy imply the presence of a great deal of additional unseen, dark material. Zwicky took the argument further, noting that entire clusters of galaxies would scatter unless bound together by the gravitational pull of more invisible stuff.

Oort and Zwicky were working with limited data, yet their conclusions proved remarkably robust. In the 1970s, astronomers Vera Rubin and Kent Ford used the same basic arguments to show, in much more convincing detail, that spiral galaxies appear to keep their shapes because of the gravitational glue from nearby dark matter.

Once their colleagues started taking the idea seriously, they saw dark matter everywhere: Almost every aspect of the formation, motion and clustering of galaxies indicates the presence of far more mass than can be accounted for by the visible stars and nebulas.

At this point, the case turns even more interesting and complicated. Theoretical models of the Big Bang allow precise calculations of the composition of the early universe. Those calculations, in turn, indicate the precise amount of ordinary matter expected in the universe. During the 1980s, researchers plugged the numbers into their computers and out came a hard prediction: Only about one-sixth of the deduced mass of the galaxy clusters can consist of atoms. Not only is most of their matter dark, then, but the dark matter simply cannot be the same kind of stuff we are made of.

Starting in the 1990s, studies of the cosmic microwave background (the afterglow of the Big Bang) offered a different test of this startling idea. Reverberations in the very young universe imprinted onto that background a discernible pattern, which depends on the mix of ordinary matter to dark matter. In 2013, the Planck satellite gave the definitive reading on that mix. The result, again: one-sixth ordinary matter, five-sixths dark matter.

But wait, there’s more! Because dark matter does not interact with radiation (if it did, we could see its light), it can clump together more efficiently than atoms, which tend to heat up and get agitated. The efficient clumping of dark matter allowed it to create dense patches that spurred the formation of the first galaxies. Put dark matter into the models, and they can pretty much explain the structure of the modern universe. Without dark matter, the models fail miserably.

A few researchers, most notably Mordehai Milgrom at the Weizmann Institute in Israel, have perceived a possible flaw in these deductions. Almost all the evidence for dark matter ultimately depends on its gravitational effects. Perhaps the reason the universe looks strange is not because of dark matter, but because the standard theory of gravity is slightly wrong, Milgrom suggests.

The problem with his argument is that no single modification of gravity can explain all the different phenomena outlined above. Making everything fit requires a new theory of gravity, plus additional undiscovered long-range forces, and still requires some exotic dark matter on top of that. There is no escaping the dark truth.

Dark matter is not a hunch, nor is it some kind of scientific sleight of hand. It is an actual, physical thing discovered indirectly but definitively based on multiple independent lines of evidence.

That evidence leaves astronomers in an uncomfortable place, with the vast majority of the cosmos missing. Fortunately, the current situation still leaves a lot more places to investigate. After the LUX experiment completes its run, the affiliated researchers will regroup to build an upgraded version called LUX-ZEPLIN (nerd band name alert), or LZ, which will be 10 times as large and sensitive. In the meantime, a competing team is upgrading a device called the Axion Dark Matter eXperiment (ADMX), which will search for axions, a hypothetical dark particle so slight that it would sail right through LUX undetected.

The ongoing study of dark matter is a precious exercise in “exploring connections” — not just between different fields of science, but also between humans and the cosmos.

It’s possible that both approaches will fail. Then the process of finding dark matter becomes exponentially harder, though not necessarily impossible. Dark matter particles might occasionally destroy each other, creating a visible signal (like the now-discredited Fermi observation). Or they might interact with each other to produce organized structures, such as a thin, dark disk embedded within our galaxy. A dark disk could have an ominous effect, gravitationally destabilizing our solar system every 30 million years or so and setting loose a rain of comets. Such a comet shower could potentially trigger a mass extinction — hence Randall’s link between dark matter and dinosaurs.

A variety of sky surveys, from both space and terrestrial observatories, are seeking dark structures in our galaxy and beyond. Whether or not they confirm Randall’s specific model of dark matter, those surveys will provide a lot more information about how the dark stuff behaves and what it might consist of. They will provide a more accurate cosmic map of all matter, both the seen and the unseen. Above all, Randall says, the ongoing study of dark matter is a precious exercise in “exploring connections” — not just between different fields of science, but also between humans and the cosmos.

As much as it is a source of confusion, dark matter is also a source of illumination. It is all around us. It is almost surely passing through you right now. Our galaxy would not exist without it. We literally owe it our lives.