A Century On, This Math Prodigy's Formulas Are Finally Unravelled

Srinivasa Ramanujan's formulas were a mystery for years. 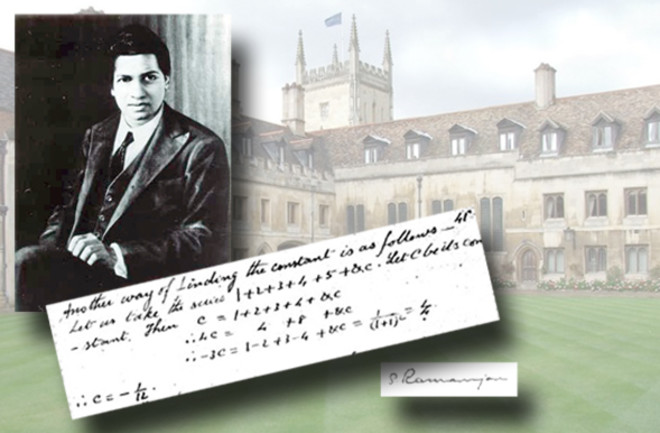 A hundred and one years ago, in 1913, the famous British mathematician G. H. Hardy received a letter out of the blue. The Indian (British colonial) stamps and curious handwriting caught his attention, and when he opened it, he was flabbergasted. Its pages were crammed with equations — many of which he had never seen before. There were many kinds of formulas there, and those that first caught his attention had to do with algebraic numbers. Hardy was the leading number theorist in the world — how could he not recognize the identities relating to such numbers, scribbled on the rough paper? Were these new derivations, or were they just nonsensical math scrawls? Later, Hardy would say this about the formulas: “They defeated me completely. I had never seen anything in the least like it before!”

Now, for the first time, mathematicians have identified the mathematics behind these breakthrough scrawls — shedding further light on the genius who made them.

The Mind Behind the Mathematics

The letter was written by Srinivasa Ramanujan, a poverty-stricken, marginally employed young man from the southern-Indian city of Madras, who had little mathematical training but a preternatural ability to derive mathematical identities seemingly out of the void. The equations he sent Hardy came with no proof or theoretical explanation. Ramanujan eventually said that the formulas came to him in a dream, presented as mathematical truths by his family’s goddess, Namagiri Amman (generally known in India as Lakshmi, the wife of Vishnu).

Hardy showed the unusual letter and others that followed to fellow mathematicians, and some told him they believed the writer was a charlatan claiming forgeries as math. But one of them, Percy MacMahon of Cambridge, saw a deep connection between Ramanujan’s work and partitions of numbers he had been working on, and this insight helped convince Hardy that Ramanujan’s writings were both true and new. Studying the letters further, Hardy decided that math identities included in them — involving infinite sums and infinite products, called q-series — were authentic, and that they were very valuable to mathematics as a way of deriving algebraic numbers. It later became clear that the key to Ramanujan’s formulas were two peculiar q-series: the so-called “Rogers-Ramanujan identities,” first studied in the late 1800s by the British mathematician Leonard James Rogers. Hardy concluded about Ramanujan’s identities: “They had to have been written down by a mathematician of the highest class. They must be true because no one would have the imagination to invent them.”

Impressed and intrigued by the source of these formulas, Hardy invited Ramanujan to join him in Cambridge. The young Indian accepted the gesture and boarded a ship from Madras to London after receiving permission for the trip from his mother and the family goddess. Hardy and Ramanujan worked together in Cambridge for a few short, intense years, Ramanujan producing hundreds of new mathematical results, which Hardy tried to explain and prove together with him. Hardy would say, late in life, that bringing Ramanujan to England was his greatest achievement as a mathematician.

But Ramanujan was already sick when he arrived in Cambridge, and was frequently hospitalized with various symptoms, initially believed to be of tuberculosis but now concluded to have been a parasitic liver infection. His health deteriorated steadily, and he finally decided to return to India to be close to his family. He died there in 1920, at the young age of 32.

Since then, mathematicians have been fascinated by Ramanujan’s results and there have been many attempts to find the source of his equations that produce algebraic numbers. Freeman Dyson of the Institute for Advanced Study at Princeton reportedly spent the depressing War years in London occupying himself with the study of Ramanujan’s identities. But the origin of the formulas remained a mystery for another 70 years.

Searching for the Mathematical Mother Lode

In April, on the 100th anniversary of Ramanujan’s arrival in Cambridge, the source of his equations was finally found. Ken Ono of Emory University, his graduate student Michael Griffin, and their colleague Ole Warnaar of the University of Queensland presented theorems they had just proved, which vastly generalize the work of Ramanujan and identify the source of his mathematical formulas.

Ono and colleagues discovered that the two Rogers-Ramanujan identities were just specific examples of a literally infinite reservoir of general identities employing similar infinite sums and products. In Ono’s words, they had found the mother lode that gave Ramanujan his “gold nuggets.”

The new work is very involved, including mathematics that did not exist at the time of Ramanujan. Ono and his collaborators used modern representation theory (a part of abstract algebra) as well as modular forms (an area in mathematical analysis) — both of which had helped Andrew Wiles prove Fermat’s Last Theorem — and also employed Hall-Littlewood polynomials.

This new, vast ocean of Rogers-Ramanujan-Ono-Griffin-Warnaar identities has the desirable property that it produces algebraic numbers (which are generally hard to obtain) quite readily. One of them is Φ (phi) — the “golden ratio” ubiquitous in art and nature. This number, 1.618…, is the limit of successive terms of the Fibonacci sequence, which even made an appearance in Dan Brown’s book The Da Vinci Code.

Phi was one of the key numbers that occupied Ramanujan’s attention, and the new work paves the way to the discovery of many similar numbers. What the untrained Ramanujan claimed to have gotten from his goddess is seen to constitute one example of a major underlying truth that modern mathematics now possesses — a way of generating similar numbers.

Ramanujan and his work have attracted wide attention. Professor Bruce Berndt of the University of Illinois at Urbana-Champaign has spent 40 years studying Ramanujan’s letters and notebooks — including a “lost notebook” discovered in 1976 — trying to supply proofs for the mathematical results Ramanujan had stated as facts.

“We had a place to start,” he told me, “so our work was somewhat easier — we took Ramanujan’s identities as true, and then proved them.” Then he added: “But the proofs were very hard.” How did Ramanujan know these things were true, how did he come up with such unexpected mathematical facts? “We don’t know Ramanujan’s insights,” he said. “Our proofs are likely much more difficult than the ones he had in his mind.”

So the mystery of how Ramanujan actually obtained his prescient insights about numbers and equations remains even now. The conundrum is reflected in perhaps the most famous story about the Indian number theorist. While Ramanujan was lying in a hospital bed in Putney, England, in 1917, Hardy came to see him. “My taxi had a rather dull number,” Hardy said, just making conversation, “it was 1729.”

“No, Hardy! No, Hardy!” Ramanujan jumped up in bed and exclaimed: “It is a very interesting number! It’s the smallest number expressible as the sum of two cubes in two different ways.” (This is because 1729 = 103 + 93 = 123 + 13.) Ramanujan just naturally knew such things, leaving both proofs and details to others.

What are Algebraic Numbers?

The numbers that come out as solutions of equations such as the ones studied by Ramanujan are of a certain kind, and Φ is one example of them. These are the algebraic numbers. The theory about such numbers is interesting in its own right.

We know many kinds of numbers, and it’s useful to summarize them here. The simplest and earliest-discovered numbers (already known to early humans) are called the natural numbers: 1, 2, 3, … , to infinity, and this set is denoted by N. Then if you add to these numbers zero, you form what mathematicians call a group under addition, which means you can now define additive inverses, i.e., the negative integers. The enlarged set of numbers is called the integers and denoted by Z (from the German for numbers, Zahlen). Add another operation, multiplication, and you now also have multiplicative inverses (except for zero), which are all the fractions, meaning quotients of integers, and the enlarged set is now the field of rational numbers, denoted by Q. When you add to this set all the irrational numbers (numbers that can’t be written as quotients of integers), you get the field R of all the real numbers (these are the numbers on the real number line, and we call them “real” to distinguish them from imaginary numbers; if you then also add to them all combinations of the imaginary numbers and real numbers you get the field C of complex numbers).

The German mathematician Georg Cantor proved in the 1800s that while all these sets of numbers are infinite, they are not of the same infinite size. Using ingenious methods, he showed that there are as many rational numbers as there are integers and positive integers. So N, Z, and Q have the same infinite size (or cardinality), while the real numbers, R, have a higher order of infinity (although we don’t know what it is — Cantor’s unprovable conjecture about it is called the continuum hypothesis). The “enlarged infinity” is because of all the irrational numbers — there are just too many of them! We say that N, Z, and Q are countable, while R is uncountable (and so is C).

But the story gets complicated. Numbers that can be obtained as solutions of equations with rational-number coefficients are called algebraic. So algebraic numbers can be irrational, for example √2. This number is algebraic because it is the solution of the equation x2 - 2 = 0, whose coefficients are all rational (in fact, integer): 1 and -2. Algebraic numbers were one of the main points of interest in Ramanujan’s work. The golden ratio, Φ=1.618…, is irrational but algebraic, because it is the solution of the equation x2 - x - 1 = 0. Ramanujan used infinite sums and products to obtain that number in another way. You can do it by performing the (infinite) operation on your calculator: 1 + 1 = 1/x + 1 = 1/x + 1 = 1/x… and see that the number in the display converges to 1.618… and alternately to 0.618 … (which is 1/Φ). This series of operations is the one specified by Ramanujan (although of course he didn’t use a calculator).

One fascinating fact about algebraic numbers is that they are countable, i.e., they have the same order of infinity as N, Z, and Q — even though they are members of the (uncountable) higher set R. Thus their order of infinity is more pedestrian. The hard-core irrational numbers — those that are not algebraic — are called transcendental numbers. These include π (pi) and e. There are “infinitely many more” such numbers than there are algebraic numbers, or integers, or rational numbers!

An interesting fact is that it is because π is transcendental that it’s impossible to square the circle, as the ancients had tried so hard to do. This fact became known only in the nineteenth century, when algebraic numbers became well-understood. It so happens that to square the circle, meaning to construct with straightedge and compass a square whose area is the same as that of a given circle, is tantamount to solving an equation with rational coefficients and getting π as the solution. This is impossible because π is transcendental, and therefore not algebraic. There can never be such an equation that would yield π as a solution.